“Institutionalising the role of the army in politics is wrong, and justifying it because of past experience is even worse” 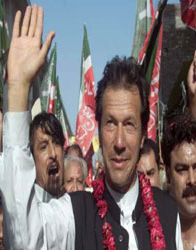 Q: Your election manifesto makes many promises but from where will you get the additional resources to implement all you have vowed to undertake, except by levying more taxes?

A: First and foremost, the responsibility of a PTI government would be to build trust between the people and the government. If the people were convinced that the government of the day was sincerely working to protect and promote their interests, they would be more than willing to pay their fair share in taxes.

With nearly 70 per cent of the total annual revenue eaten up in the form of debt servicing, it leaves precious little for investment in human development.

The PTI has prepared a strategy to deal with the debt-servicing burden. We believe that it is wrong to burden ordinary citizens by increasing regressive indirect taxation in the form of higher utility rates (electricity, gas, and fuel) and use it as a tool to generate additional revenues for debt servicing. The PTI would negotiate a long-term debt management strategy with the IMF. When in power, we would conduct an international audit of all loans and demand international arbitration for the settlement of bad loans siphoned off by corrupt leadership of the past.

We are confident that remittances by overseas Pakistanis can increase manifold. Our target is to increase remittances by 3.7 million overseas Pakistani workers from 1.0 billion USD to around 7.0 billion USD annually in five years by offering incentives and encouraging non-resident Pakistanis to send money in the range of 50 to 175 US dollars per month through normal banking channels.

The savings from debt servicing would be invested on human development to jump-start the economy by initiating labour intensive projects, which generate employment and increase production.

Q: If elected to power, would your party undo or ratify the constitutional amendments introduced by President Musharraf?

A: The mandate of the present government to make amendments to the constitution under the Supreme Court verdict should be limited to day-to-day running of the government and electoral reforms conducive for the holding of free, fair and transparent elections. The amendments are anti-democratic and pro-authoritarian and would result in subordinating elected institutions to the whims of unelected bodies. Making amendments to the constitution is the exclusive domain of an elected Parliament and no other person or institution can usurp these powers.

The constitutional amendments violate the basic management principle whereby the one who has the responsibility must have the authority. The intention behind the proposed amendments reflects distrust and lack of confidence in the electoral process, the Parliament, and the office of the Prime Minister.

Q: Do you support an institutionalised role for the army in the future political dispensation?

A: The role of the army is to defend our borders and in case of extreme emergency come to the assistance of a civilian democratic government, for example, in case of natural calamity or internal strife. Institutionalising the role of the army in politics is wrong, and justifying it because of past experience is even worse.

If the army as an institution can function, why is it that we have not succeeded in establishing functional and credible civilian democratic institutions?

The failure of democracy has more to do with the corrupt and manufactured leadership that has been imposed on the people by the establishment through fraudulent elections, and less with the lack of checks and balances or inherent flaws of the system of government.

People want democracy that can deliver and solve their problems. They cannot be blamed for not owning the democratic process. Repeated doses of democracy have only added to their misery. This does not mean that democracy has no future in Pakistan. It only strengthens the argument that the fundamentals for a free democratic society were never allowed to flourish, such as the fundamental right to choose their leadership freely without any interference.

When senior government servants are assigned the task of acting as the ‘campaign managers’ of the ‘King’s Party,’ using the entire government machinery to select, support, and elect their favourites, any hope of a ‘free and fair’ election is a mere pipe dream. A fraudulent election process cannot produce a new breed of leadership that this country so desperately needs and which is so essential for the success of any reform process. As long as our establishment takes upon itself the mantle of cobbling together unholy alliances because they are easy to manipulate, we will remain in this vicious syndrome of a society where no system works.

Q: What was the purpose of levelling allegations against Chaudhry Shujaat? This prompted a vilification campaign against yourself and Jemima Khan …

A: The purpose of producing evidence against the Chaudhries was to inform the people about the blatant manipulation of the electoral process, because future political stability depends on the credibility of the October elections.

We have submitted irrefutable evidence to the Election Commission, according to which the Chaudhries of Gujrat had loans worth 241.39 million rupees written off by different financial institutions. This is a clear violation of the ‘Declaration of Oath’ as spelled out in the nomination papers. The oath clearly states that any candidate or his immediate family member is disqualified to contest elections if he/she is a defaulter or has loans written off amounting to ‘rupees two million or more’. The documents that we released to the press include the annual report of the Muslim Commercial Bank for the year 2000, which lists Chaudhry Shujaat Hussain and Chaudhry Pervez Elahi as the Directors of the Punjab Sugar Mills, Vehari, Multan, who had loans written off to the tune of 22.792 million rupees, whereas, 218.598 million rupees were written off by the Bankers Equity Limited against the loan given to the Punjab Sugar Mills in November 1996.

Of course we anticipated a campaign against us by the establishment. A similar sleaze campaign was unleashed during the 1997 election campaign by the then ‘King’s Party,’ namely the PML(N). This time the mantle of the King’s Party has shifted to the recycled PML(N) under the new brand name of PML(Q). However, we feel that the people are wiser now and can see through the vilification campaign against my family and me.

Jemima has already responded to the accusations against her and I quote: “I am appalled by the recent vilification campaign against me. First I was called a Zionist conspirator, even though I have written in support of the Palestinians several times in international publications. I have organised a protest march to condemn Israeli acts of aggression against Palestine, and have set up a charity to help Palestinian children growing up in refugee camps. Ironically, in the west, I have been accused of the opposite, of being an Islamic extremist and anti-Jewish. Now I am accused by Imran’s political opponents of being a protÃ©gÃ©e of Salman Rushdie. Apparently, according to the papers I was tutored by him for my degree. This is absurd and untrue. I have never met the man and in fact, several years before I even met Imran or became a Muslim, I condemned his book The Satanic Verses in a letter to The Times newspaper in London. I condemn it as strongly even today…

“Imran’s political opponents know that they cannot tarnish his reputation any other way than by launching baseless attacks on his wife.

“I don’t want to have to resort to defending my faith in a Muslim nation against wild allegations by politicians out to score political points. I ask only one question: is it Islamic to constantly question the faith of another Muslim, in my case, a western woman who has come here, converted to Islam of her own volition, who has made Pakistan her home?”