“How can the elections be free when the General is openly supporting those who supported him in the referendum?” 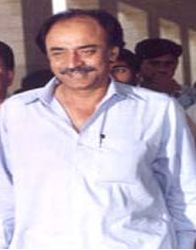 Q: Do you think the government will hold free and fair elections?

A: Why should a military dictator want to hold free and fair elections when he has made so many changes in the constitution. The black laws that he has introduced will create a leadership crisis in the country. How can the elections be free when the General is openly supporting those who supported him in the referendum to the extent of demarcating the nation by drawing a line between the ones who support him and those who don’t. He has remained in power for three years and done nothing. He has failed in his seven point agenda. Neither has he created harmony between the provinces, nor has he arrested the problem of unemployment.

Q: Your party supported General Musharraf when he took over and there have allegedly been efforts to cut a deal with him.

A: He took over unconstitutionally and we said, it is the most unfortunate thing to happen to the country and that he should hold fair and free elections as soon as possible and hand over power to the civilians. This is in fact what Mohtarma Benazir Bhutto said verbatim in her first interview. We didn’t want the nation to plunge into a crisis with people fighting the government on the streets. We tried to persuade the General to make a graceful exit, but he never liked the word ‘exit’.

Meetings went on between us and the basic purpose for this exercise was not to shut the doors on dialogue. The GDA and ARD had also resolved to ask him to form a government of national consensus to supervise fair and free elections.

Unfortunately, the present regime, since its inception has been engaged in unconstitutional acts. According to the Supreme Court decision, General Musharraf was supposed to transfer power democratically by October 12, but he has chosen the last day to hold the elections. With the present election schedule, the Senate elections will take place one month after the mandate given to him by the court. So he has already surpassed and violated the court’s decision.

Likewise, the referendum was another violation without any justification. A referendum can be held on issues of national importance, it is not an election. His intentions are clear and that is why we are vociferously opposing his plans. He has got himself elected for five years and now he is talking about seven years.

Q: What kind of scenario will emerge after the upcoming elections?

A: It is quite clear that Musharraf’s designs are basically the same as General Yahya and General Zia. They wanted a hung parliament and now he wants hung assemblies. He doesn’t want a strong parliament that could oppose him to emerge after the elections. All that big talk of good governance seems to have been dumped in the debris of routine horse-trading, arm-twisting and intimidation. The game is the same: the establishment versus the people. There is nothing new happening. Musharraf wants a fractions political set-up to emerge so that in the future he can say that his stand on the politicians is justified.

Pakistan is slipping into the habit of disastrous politics. We have been telling the western world not to give any individual so much latitude that he reduces the importance of parliament to a mere rubber stamping agency. Merely cooperating in the international coalition should not deny millions of people the right to live in a democratic society. It is a faÃ§ade that the international community wants a change of leadership the way General Musharraf is going about it, through black laws.

Q: Given all this, isn’t it a time for your leader to come back to the country instead of remote-controlling the party from abroad?

A: On the one hand, people criticize political parties and say they should start acting like political parties and stop believing in personality cults. But what has the present regime done? They influence the courts and deny justice to the people. Now in Pakistan people are scared of going to the courts. What could be more unfortunate than the Supreme Court Bar Association being compelled to adopt a resolution that their lawyers will not take up any cases in the Supreme Court.

We have been struggling as a political party for the restoration of our democratic, economic and fundamental rights. We have been trying to keep up our struggle without the physical presence of our leader in the country.

Q: But this doesn’t answer my questions…

A: The way the present government is behaving, it is in no mood to give her justice. When malafide intentions are blatantly applied and adhoc laws are passed, what is the guarantee that another new law will not be passed that says, “We are putting Benazir Bhutto behind bars permanently.” It is not a choice to come back and be put in jail for years. What is wrong with Benazir Bhutto saying that she is willing to come and face charges as long as she is guaranteed justice. If judges are coerced to give judgments the way the government wants, isn’t it better to stay away and expose them, rather than presenting oneself on a silver platter.

Q: The charges of corruption against your government, however, do not seem to be untrue.

A: Corruption charges were levelled against our two governments and cases of corruption against many of our party colleagues were referred to the courts, which were working under the Sharif government while we were in the opposition. But we stood acquitted. The same Chief of Army Staff was witness at the swearing-in ceremony, when the same Mr. Asif Ali Zardari was sworn in as a minister by the same President Ghulam Ishaq Khan, after he dismissed the Nawaz Sharif government in 1993. It was the same establishment that witnessed the turnabout, which earlier had charged Mr. Zardari for corruption. All the accusations against us are still only accusations. Though the PPP leadership has been interrogated, investigated and hounded since our dismassal, not a single case has been proven against them. The various governments, who have been carrying out all these investigations have not been able to prove a single case against any of us, despite all the state machinery and unlimited expenses at their disposal.

Q: Your party has been in power twice after 1988. You have failed to deliver your election promises the people, from the ‘New Social Contract’ to the ‘Agenda for Change’. Why should people trust you once again when you keep your election manifesto on the shelf once you are in power?

A: Political parties in Pakistan have never been given their full term. Manifestos that are announced at the time of election, are for the full term. We may have done much more if we had been allowed to complete our terms. Let me tell you one thing, Pakistan is at the stage when just providing basic infrastructure is termed as revolutionary. Providing radio service was much talked about during Ayub Khan’s era, so why can’t the PPP claim to have provided electricity on a mass scale? Why can’t we claim that maximum foreign investment came at the time of the PPP’s term in power? We can easily claim that we tried to arrest the problem of unemployment in the country and that the open door policy for the public to reach their government was a trend set by the PPP and Mohtarma Benazir Bhutto.

Q: What problems is your party confronting in its election campaign?

Another major problem is the partisan posture of the Election Commission. The attitude of the judiciary, the administration and the Election Commission are monitored by those agencies who said, they created the IJI in 1990 and gave in writing to the Supreme Court that they had distributed 140 million rupees to manipulate the 1997 elections. The same people who were supposed to supervise fair and free elections are now interfering in the election process.

The truth will eventually come out, but these acts by the establishment have marred the excitement of fair elections. An atmosphere of depression is visible to the extent that even international monitors are saying that the people are no longer interested in politics.

The government’s priority should have been to value the vote in letter and spirit, but once again the people are being denied. There is blatant manipulation of votes. Why is the General interested in one party and opposing the other? Why he is forecasting election results by saying that he doesn’t want certain people to come into the assemblies?