“The Peoples Party doesn’t believe in running away, even if the dice are loaded against us” 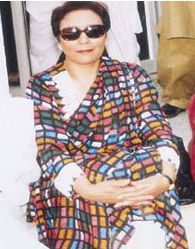 Q: It is said in PPP circles that all power flows from Naheed — that even party heavyweights like Makhdoom Amin Fahim and Aitzaz Ahsan cannot take a step without first getting the nod from you. How much substance is there in such reports?

A: It is incorrect. The Pakistan Peoples Party functions as a democratic institution where instructions are issued and decisions are taken by the Chairperson after developing a consensus and in consultation with the Central Executive Committee, senior party colleagues and the federal council. Where necessary, the party organisation at the provincial, division, district and tehsil levels are also consulted before a final decision is taken.

Q: Do you have faith that the forthcoming elections will reflect the will of the people?

A: The regime has set into motion a machinery for pre-poll rigging in which the state apparatus and resources are being utilised. Our party candidates have been pressurised, Mohtarma Benazir Bhutto-specific laws have been promulgated, and every attempt is being made to keep the mainstream political parties out of the political arena, but politics and history have their own dynamics.

Q: Since you do not have faith in the current electoral exercise, why is the PPP (or PPPP) in the fray? Is it a fear of being completely marginalised after October 10?

A: The Pakistan Peoples Party is a political entity and we don’t believe in running away from the political process. No matter if the dice are loaded against us.

A: For the moment, the Pakistan Peoples Party is going into the election but being a political party, all political options are open. Being pushed to the wall would mean that there is no room for maneouverability.

Q: So far in the electoral campaign the PPPP’s focus seems to have been more on getting rid of Musharraf/the army, than on real issues. Is that top of your party’s agenda?

A: The economic emancipation of the middle-class, lower middle-class and working classes of Pakistan has been and continues to be the major agenda item of the Pakistan Peoples Party, but dictatorship and military takeovers have interrupted this process and during these periods of interruption the priorities set by elected governments have also been changed. Hence both complement one another.

Q: Does your party propose to change priorities in terms of budget allocations — i.e. allocate more funds to the social sector as opposed to defence?

A: The Pakistan Peoples Party has always generated the economy, found the money and increased the allocation of funds to the social

Q: Can you cite specific cases of interference in, or sabotage of your party’s campaign by the government, or agencies at its behest?

A: There is a long list of cases and specific instances which have been pointed out in various communications to the Election Commission of Pakistan by Mian Raza Rabbani, acting secretary general, Pakistan Peoples Party. The Pakistan Peoples Party has prepared a document of over 125 pages of various instances of pre-poll rigging to date.

Q: How do you respond to charges levelled against you that you have taken money to allocate tickets, and that despite the party line, have awarded tickets to personal favourites rather than the loyalists who were promised tickets according to party policy?

A: I strongly dismiss these allegations with the contempt that they deserve. The procedure adopted by the party for theawards of tickets was transparent and involved the widest possible consultations of all structures of the party, starting from the tehsil, district, division, provincial and the federally formed parliamentary board. These consultations were carried out through telephonic conferences in the presence of the Chairperson.

Q: Even if the PML(N) and PPPP work out a power-sharing formula in the new Parliament, how effective do you think the government can be in the post-constitutional amendment framework?

A: It is yet to be seen whether Parliament will endorse in toto, the LFO.

Q: If the PPPP manages to form the government, would it follow General Musharraf’s post-September 11 policy vis-a-vis the war against terrorism?

A: The Pakistan Peoples Party since its inception in 1967, has an anti-fundamentalist and anti-terrorism policy. During its tenures of government, we did not allow the export of terrorism from our soil. We will continue to be a part of the war against terror.

Q: Benazir had once said that Kashmir should be “left to another generation.” Will that be the party line if elected?

A: It is incorrect that Mohtarma Benazir Bhutto had ever said that Kashmir should be left to another generation. What she and the party maintains is that it is a dispute that has defied solution for the past 53-54 years, and the world scenario is testament to the fact that such disputes require time for position’s to soften and confidence to build.

Q: What is the status quo regarding the cases filed against you for alleged irregularities?

A: For the moment there are two cases that are pending against me. One initiated by the caretaker government of Mairaj Khalid pertaining to the Bait-ul-Maal. In this case, which has been pending since then before a court of law, there are no charges of corruption, but misuse of authority.

In 1997, a reference was filed by the Nawaz Sharif government against Mohtarma Benazir Bhutto in which I am a co-accused. This reference, pending in an accountability court, deals with providing employment in PIA.

Apart from this, for the last six years, I have been on the ECL, but there is no investigation pending against me.

Q: Given the remote control nature of the PPPP’s leadership at this juncture, how viable will this situation be in the long term if the party does manage to form the government?

A: The party is not being run by remote control. In this modern era of communication where distances have been reduced, the Chairperson runs the party in almost the same manner as she would have if she was in Pakistan. She is in touch with her party structures, her senior colleagues, all cadres of the party.

Q: To what extent is Benazir willing to delegate authority to her lieutenants?

A: The Chairperson has delegated authority to all party structures and office bearers in accordance with the constitution and the rules of procedure of the Pakistan Peoples Party.

Q: It was reported in newspapers that Benazir would only return if she was allowed to contest elections. Since this is not likely, after the event, on what factors will her return be contingent?

A: The central executive committee of the Pakistan Peoples Party has taken a decision that Ms. Bhutto will return to Pakistan. The CEC is at the moment reviewing the political situation, as also the various challenges mounted against the law that disqualifies her, and her disqualification itself. In the light of these developments, the party will decide the date of her return.