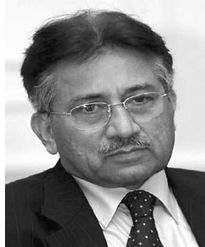 Even in the best of times, Pakistan’s politics can defy the forecasts of established pundits. And in times such as these, when hopes and fears mix into a cocktail of grand confusion, it becomes even harder to make any sense of the ensuing circus.

The political scene is a bewildering array of paradoxes. None is more striking as one concerning the power of President General Pervez Musharraf, who despite being on top of everything, is grappling with fast multiplying challenges.

On paper, and constitutionally, he is a very powerful president. He can get rid of an erring government, make all important appointments, including those of senior judges and the army chief and supervise the affairs of government using his political weight. His presidential status has been constitutionalised through a painstaking but successful deal with the six-party religious alliance, the MMA. Through this deal, the 17th Amendment has been passed, which embodies most of the changes that General Musharraf had made in the constitution before the elections took place.

The same deal has also paved the way for General Musharraf to seek a vote of confidence (through a simple majority) from the parliament, putting a seal of procedural legitimacy upon the status he claimed through the controversial referendum held in 2002. To mark his new status, he also addressed the joint session of parliament on January 17. In the face of jeers and booing which made him break out into a cold sweat, Musharraf thus fulfilled a requirement that had been pending for a year — one which is supposed to be met at the start of the first year of a newly-elected government.

Musharraf has managed to cross all constitutional hurdles, while retaining the power to dissolve the assembly endorsed by the parliament, and has through the 17th Amendment deal, managed to drive a wedge in the ranks of the the Alliance for the Restoration of Democracy, with the PPP and PML(N) now fighting a war of words against the MMA for legitimising Musharraf’s rule.

With all this under his belt, General Musharraf’s plate should be void of political problems. Yet his constitutional legitimacy has not added to his political capital, nor yielded visible political stability. And on the personal front, he is being attacked far more viciously by the opposition than ever before. “He is a dictator and just because he is wearing constitutional garb, that does not mean he is a legitimate political leader,” said Saad Rafiq, the Punjab General Secretary of the PML(N). The sentiment is widely shared by other parties of the ARD, which have been consistent in their campaign against General Musharraf’s rule.

The MMA, frustrated and worried over the growing public perception of its being a closet ally of General Musharraf, has also turned up the volume on its criticism. Qazi Hussain Ahmad, Amir Jamaat-e-Islami and the acting president of the MMA, in a recent interview, pulled no punches against President Musharraf. “His time is up. The clock is ticking. We have forced him to take off his uniform by the year-end. Once he is gone, his unpopular foreign policy of bending before the US will also be over,” he said.

Qazi Hussain is not the only one counting the days to when President Pervez Musharraf will lose the protection of the khakis. Musharraf’s many other detractors, ARD parties included, believe that by committing to a date for resigning his army post, General Musharraf has already entered a lame-duck phase. Insiders say the leadership of the Pakistan Peoples Party and the Pakistan Muslim League (N) is planning its return around the date President Musharraf takes off his uniform.

To ensure that he is not relegated to the same tragic ranks of powerful civilian presidents like Ghulam Ishaq Khan and Farooq Ahmad Khan Leghari, Musharraf’s aides are busy building blocs of support for him. There is a body of opinion that has suggested he take over the reins of a United Pakistan Muslim League, and thus acquire a political constituency that will see him through the tough political times ahead.

Insiders say that the renewed efforts to speed up the unification process of the Muslim League have been undertaken primarily with this purpose in mind.

Mustering political support without the backing of the barracks is inherently problematic. The Muslim League’s legendary adaptability to political expediency aside, there is no consensus yet on whether handing over the party’s top office to a former army general and a sitting president will do any good to the political fortunes of the party’s leadership, which is accountable to its constituencies.

The other attempt to further strengthen the president’s already strong hands in the system — through the National Security Council — is not popular among most political parties. While the ARD and the MMA are against making this body part of the system, even by an act of parliament, some within the PML(Q) believe there is little political virtue in backing the NSC. “The short-term gains for the Pakistan Muslim League are many,”says a senior member of the ruling PML(Q), who is jockeying for a ministerial seat in the cabinet. At least the old crises and power-play among the president, the prime minister and the chief of army staff, which rocked the boats of sitting governments, will be resolved at this forum. But we also know that the NSC will further dilute an already enfeebled parliament, reducing it to a debating club that even its members will not take seriously. As parliamentarians, we have not much pride left. We are under constant watch by the army. The NSC will shrink our stature even more.”

Fears of the army dominating the political system are widespread. There is a growing feeling in the ruling party that the government is bearing the brunt of President Musharraf’s political troubles. As the opposition continues to shoot rapid-fire salvos and General Musharraf advances on the dangerous path of publicly taking unpopular decisions, his political allies’ loyalties are being tested to the utmost. And some are already keeping a fair distance from the presidential quarters.

There is a groundswell of resentment against these policies and this resentment is not confined to the political opposition. The arrest of 11 members of the nuclear establishment and the humiliation of Dr. A. Q. Khan, who appeared on national television to apologise for proliferating nuclear technology to Iran, Libya, North Korea, has resulted in massive public embarrassment for Musharraf’s supporters.

The government’s explanation that many of those being questioned, led by Dr. A.Q. Khan, were “motivated by greed,” and were involved “in acts of transfer of nuclear technology to Iran and Libya,” has not cut any ice with the public which suspects that Dr. A.Q. Khan, once anointed the father of the bomb, has been targetted under US pressure. The general impression is that following its volte face on Afghanistan and its acceptance of peace talks with India on New Delhi’s terms, General Musharraf is now bending over backwards on the nuclear front at the behest of the US, thus setting the stage for a nuclear rollback.

“There will be no nuclear rollback. Stop saying this. These scientists committed a wrong and have paid for it. It has got nothing to do with Pakistan’s nuclear capability, which is increasing,” maintained an irate General Musharraf at his press conference, where he also announced that, on the federal cabinet’s recommendation, Dr. A.Q. Khan had been pardoned for his transgressions.

The successful media campaign of the families of the arrested scientists, spread by the burgeoning ranks of the private-sector electronic media, has blown holes in the official stand. The more the government talks about the suspected crimes of these scientists, the greater the reaction in the form of pointed questions involving the timing of the arrests, the manner in which government officials have hurled accusations against those arrested even before conclusive evidence is found against them, and most importantly, whether any one of these dubious transactions could have taken place without the consent of the ruling generals.

Citizens’ groups, lawyers, teachers, students, the business community and opposition leaders have all expressed grave concerns. Even fiercely anti-nuclear lobbies, like the Human Rights Commission of Pakistan, have been forced to take notice of the matter, blasting the government for short-circuiting the due legal process.

Inside the closed doors of the army’s power corridors, there is little sign of unease. “There is debate but in the end there is consensus and consent,” says a top level military official when asked if public sentiment over Kashmir, India, the ongoing operation in the tribal areas, and the arrest of scientists is ringing in the army’s decision-making bodies.

Some do not believe that the army’s consent is voluntary, or even permanent. Qazi Hussain Ahmad believes that because the army staff exercises the power to make or break careers, many of those in disagreement will not speak up as long as Musharraf remains head of the army. “The moment he goes, you will see how much disagreement there is on issues of national concern. None of his policies are popular,” says the leader of the Jamaat-i-Islami.

Deaf to these concerns, General Pervez Musharraf marches on, professing an unwavering belief in his policies. He has repeatedly stated that those who disagree with his handling of sensitive national issues do so out of incompetence or plain spite. As a result, he has banished all critical feedback. Centralising decision-making, consensus in the inner circle is reduced to a few nodding sycophants.

It is unfortunate that all this is happening at a time when the course of Pakistan’s future is being shaped by external events, and when genuine national debate is a must. If General Musharraf and members of his charmed circle can steady the national ship from behind the captain’s helm, it will be a fantastic achievement. The cost of failure will be steep: the loss of what remains in the way of political sanity and stability for the country.