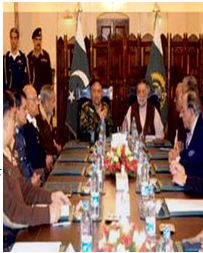 There is widespread skepticism, both domestically and internationally, of the Pakistani establishment’s claim that it knew nothing of Dr. A.Q. Khan’s activities as he roamed the globe, handing out recipes for making the deadliest weapon known to mankind. Excellent reasons back this skepticism.

It is impossible that the government was unaware of the shady undertakings of Pakistan’s highly celebrated bomb-maker — a metallurgist who is often, but wrongly, referred to as a “nuclear scientist” — for the simple reason that he had widely and openly advertised his wares over the last decade. For example, every year, 2003 included, when the proliferation controversy was already hot, Islamabad was festooned with colorful banners advertising workshops on ‘Vibrations In Rapidly Rotating Machinery,’ and ‘Advanced Materials,’ sponsored by the Khan Research Laboratories (also known as the Kahuta Laboratories). The workshops had obvious and immediate utility for centrifuge technology, essential for producing bomb-grade uranium.

In earlier years, Dr A.Q. Khan and his collaborators had published a number of papers on critical issues regarding the balancing of centrifuges and magnetic bearings. These dealt with technical means of enabling centrifuge rotors to spin close to the speed of sound without disintegrating, essential for making bomb-grade uranium. It could scarcely be more blatant. But to make absolutely certain the message was being received, Kahuta issued glossy brochures aimed at “classified organisations.”

As part of the alleged plea-bargain with General Musharraf’s government, Dr Khan’s confession states that no other government officials were involved in his nuclear dealings. This is astonishing and unbelievable. The state’s desperate strategy — to ascribe all wrong-doing to “a few greedy individual scientists” — will find few takers. Nor should it because since its inception, Pakistan’s nuclear programme has been squarely under army supervision.

A multi-tiered security system was headed by a Lieutenant General (now by two), with all nuclear installations and personnel kept under the tightest possible surveillance. Engineers and technicians at Kahuta were required to report colleagues who spent too much time looking out of windows. Even diplomatic immunity was insufficient to prevent a physical roughing-up of the French ambassador to Pakistan some years ago, when he journeyed to a point several miles away from the enrichment facility. Kahuta was considered so sensitive that even Benazir Bhutto, the then serving prime minister of Pakistan, claimed she could not receive clearance to visit the site. In such an extreme security environment, it would be impossible to miss the trips abroad of senior scientists, engineers and administrators, their meetings with foreign nationals, and the transport and transfer of classified technical documents and components, if not whole centrifuges

For General Musharraf’s government, Dr A.Q. Khan’s megaton-sized ego and his escapades over the last decade and a half, eventually turned out to be a nightmare. Even as the proliferation controversy heated up and his surreptitious activities came to light, he defiantly declared in a Geo-TV interview in late December: “Who made the atom bomb? I made it. Who made the missiles? I made them for you.” 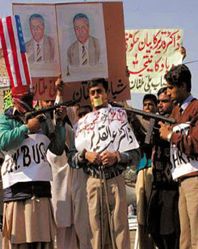 While Dr A.Q. Khan’s famed lust for wealth and real estate may have been part of the motivation to proliferate, the real cause lies elsewhere. From the inception of the nuclear bomb programme, the Pakistani establishment has sought to turn its nuclear ambitions and success into larger gains. For one, it wanted and gained the support of hundreds of millions of Muslims the world over by claiming to provide a Muslim “success story.” For another, it enabled Pakistan to enjoy considerable financial and political benefits from oil-rich Arab countries. Among others, Libya reportedly bankrolled Pakistan and may even have supplied raw uranium. After Pakistan successfully tested in May 1998, the Saudi government proferred an unannounced gift of four-billion-dollars worth of oil, spread over a period of five years, to help Pakistan tide over difficulties caused by the resulting international sanctions.

Both General Zia ul Haq, under whose rule, the bomb programme achieved success, and the succeeding Chief of Army Staff, General Mirza Aslam Beg, who headed the Pakistan army from 1988-1991, subscribed to a pan-Islamic vision. Possessed by the idea of “strategic defiance” of the US, and of turning Pakistan’s nuclear capability to its full strategic and financial advantage, Beg in particular wanted strong defence ties with Iran. According to Ishaq Dar, who was Pakistan’s minister of finance in the Nawaz Sharif government, Beg had suggested a 12-billion-dollar price tag for nuclear assistance to Iran. It seems that some scientists in Kahuta followed up on these ideas.

It is a supreme irony of history that Iran and Libya — both Islamic countries and recipients of Pakistan’s nuclear largesse — spilt the beans on Pakistan. In his marathon press conference in which he announced that Dr. A.Q. Khan’s plea for pardon had been accepted, General Musharraf lashed out at the two countries for caving in to international inspectors and turning over documents on their nuclear programmes. “Our Muslim brothers did not ask us before giving our names,” he said. He showed no gratitude at their having exposed an international crime ring.

General Musharraf is reported to have given Colin Powell his “four hundred percent assurance that there is no such interchange taking place now.” This may be enough for the Americans, worried as they are about Musharraf’s life and his government’s stability. But it is worth remembering that this is not the only instance of scientists from Pakistan’s nuclear weapons complex selling their skills. Two years ago, it was scientists from the Pakistan Atomic Energy Commission who wanted to play their role in the jihad, and in a fit of Islamic solidarity, went to Afghanistan and met with Osama and the Taliban. It is hard to believe they were the only ones so inclined.

Pakistan’s bomb-makers, like the bomb itself, have become a problem. They have seriously darkened the country’s reputation by engaging in illegitimate nuclear commerce. Worse, they have put it in serious danger of a devastating attack by the United States if a nuclear device is ever used against an American city. It is very likely that should this cataclysmic event ever happen, the Americans will bomb first and look for proof later.

Pakistan will have to put its nuclear house in order. Anything less than strict and complete accountability, regardless of rank or reputation, will leave the door open for those who may wish to try their luck, or in whom the ‘fire of faith’ burns bright. Whether for profit or God, Dr A.Q. Khan and his cohorts, have long violated the laws of the state they have always claimed to defend. To pardon this heinous crime against humanity, and allow them to keep their ill-gotten wealth, is a travesty of justice and the law.