Two major operations were conducted by the Pakistan army in the South Waziristan Agency over a couple of months, resulting in the killing of about a dozen foreign nationals suspected of mounting guerilla attacks in Afghanistan. The fire-exchange also took the life of six personnel of the armed forces. No foreign terrorist has been nabbed alive during these operations, but local tribesmen openly admit that Pakistani as well as Afghan tribesmen in the border areas had given foreign nationals sanctuary.

Since the suspected terrorists are always on the move and cannot stay in one area for too long, the hunt ranges from area to area and agency to agency. In the beginning, the major thrust of the foreigners fleeing Afghanistan due to heavy US bombing and ground operations was in North Waziristan Agency, and the border areas of this agency were used for attacks in neighbouring Khost, Paktia and Paktika provinces of Afghanistan. However, the arrival of Pakistan armed forces pushed these elements to the South Waziristan Agency and mountainous regions across the border .

Officials from the political administration claim that a sizeable number of unwanted foreign terrorists are taking shelter in the inaccessible areas of the North as well as South Waziristan agencies. “We expect a major breakthrough after Eid. Let’s see what the tribal Lashkar decides about the fate of the local protectors and foreigners,” said Rehmatullah Khan Wazir, Assistant Political Agent, Wana.

Tribal chieftains, as well as officials of the political administration, confirm the presence of Chechens, Tajiks and Uzbek nationals in Azam Warsak and Baghar areas of South Waziristan in the recent past, but say some were killed in the military operation and others fled the region. “There were some Chechen and Tajik families, mostly women and children in the area, but even they have shifted from there due to fear of operations,” said Malik Baa Khan Mehsud from Wana, headquarters of the South Waziristan Agency. The tribal chieftain said no Arab national has been spotted in the agency since the killing of one of the top Egyptian leaders, Ahmad Saeed Khabar alias Abu Abdur Rehman, in a military operation in Baghar, along with his son and eight Chechen nationals. Two Pakistani soldiers also lost their lives in this operation. The Egyptian was allegedly linked with Al-Qaeda, but some sources reject the claim that Khabar was a member of Osama bin Laden’s network. “There was another foreign national in Baghar, who has moved along with his family. I am told he is a Tajik and the leader of a resistance group,” Malik Baa Khan said. Locals claim that tribal youngsters from Pakistan, inspired by Muslim militant movements across the globe, are joining the ranks of Al-Qaeda and the Taliban to fight against foreign occupation forces in Afghanistan. 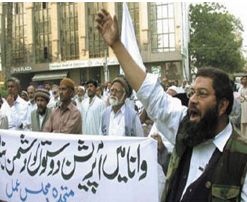 Responding to the ultimatum given by law enforcing agencies, the tribal Lashkar has given a deadline to all foreigners residing in the tribal belt to leave the area, otherwise action would be taken against them and those providing them protection. However, the authorities as well as the tribal Lashkar have been unable to convince the five most wanted tribesmen from the Wazir Yargulkhel sub-tribe, who are charged of offering shelter to terrorists, to surrender. Their houses have been demolished in line with the tribal tradition of punishing violation of the jirga’s decision, but they are still at large and refuse to surrender. Among them are Maulavi Abbas, Maulavi Noor Islam, Nek Muhammad and Sharif, while the identity of the fifth person is yet to be confirmed.

The tribesmen maintain that the Pakistan armed forces should not indulge in direct action against the tribesmen and should depend on the political administration and the local jirgas to extend the writ of the government and lay hands on the wanted persons.

The rocket attack on the army camp in Wana on January 9, which killed four army jawans, could have been avoided, had the operation against wanted tribesmen been carried out through the Lashkar. Several operations by the Pakistan Army on its own soil and the US-Afghan forces across the border, have failed to nab Osama bin Laden, his deputy Aman al-Zawahiri and other top al-Qaeda leaders, who are believed to be hiding in the tribal areas of Pakistan.

The latest videotape released by Al-Qaeda, experts said, suggest that Osama bin Laden was hiding in the tribal belt of Pakistan bordering Afghanistan. The number of Arab nationals in the tribal areas of Pakistan or inside Afghanistan has, however, gradually dwindled due to the Iraq factor. Arab sources claim that the majority of Al-Qaeda fighters have rushed to Iraq to fight against US forces there.

“The suicide attacks against US occupation forces in Iraq suggest that Saddam’s capture has not altered the nature of resistance. I am hundred per cent sure that Al-Qaeda has taken charge of the resistance in Iraq,” remarked an Arab source. Arab nationals, who once felt safe in Afghanistan, particularly during the six-year long Taliban rule, have largely moved away from this war-ravaged country, although the two recent suicide attacks by Afghan nationals point to an escalating level of violence.

The two attempts on the life of President General Pervez Musharraf also send out signals of grave concern. “We are after them. We will not let them hide in pockets to be used against our leadership and people,” remarked a government official, adding that pockets in the tribal belt could prove to be breeding ground for terrorists, while those pulling their strings continued to glorify violent deaths as martyrdom. “We are not acting at the behest of anyone, we will take action for our own safety and in our own national interest,” maintains an official engaged in the ongoing operation in South Waziristan Agency.