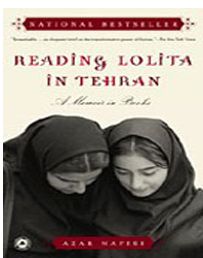 I bought the book for the title, and because it was billed as a memoir in books. Lolita was forbidden to us in our growing years, when we were charting through literary terrain. Any mention of it still brings back memories of the thrill of trying to read the book on the sly back in the 1960s. In Iran in the late 1990s, women, some my age and some much younger, were still reading Lolita under covers. This book, among others, was banned as ‘immoral’ by the Iranian government, and could no longer be taught in the university.

The book opens with Nafisi, a literature professor and expert on the Russian writer Nabokov, being forced to leave the university where she teaches due to her refusal to wear the hijab. Not willing to give up on her passion for English literature, she brings together seven of her most promising female students and sets up literature classes in her home. Here they gather each week for two years, (1995-’97), to discuss books and authors, and to try make sense of their own lives through that of the fictional characters. Lolita, Invitation to a Beheading, the Great Gatsby, Huckleberry Finn, Daisy Miller, Pride and Prejudice etc. are all read and discussed against the backdrop of life in Tehran.

Through four novelists — Nabokov, Fitzgerald, James, and Austen — and their work, Nafisi tries to link the ideals their novels espouse to those she and her students aspire to. In the confines of Nafisi’s home they “shed their mandatory veils and robes and burst into color.” Soon the ‘book club’ leads to debate on the social, cultural, and political realities of living under authoritarian rule. Much time is spent discussing harassment at the hands of the ‘morality guards,’ the daily indignities, love, marriage, and life in general. Indeed their conversations give readers a rare glimpse into the minds of women who have suddenly had many things they had taken for granted snatched away and declared immoral

For, to the author, Lolita becomes a metaphor for life in Tehran. Nafisi sees the truth in Lolita’s story as the appropriation of one individual’s life by another. She writes, ” The parallel to women’s lives is clear: we had become the figment of someone else’s dreams…We were not Lolita, the Ayatolla was not Humbert and this republic was not what Humbert called his princedom by the sea. Lolita was not a critique of the Islamic Republic, but it went against the grain of all totalitarian perspectives.”

Nafisi’s students use Lolita, and the other books as lenses through which they can view their own situations: “There, in that living room, we rediscovered that we were also living, breathing human beings; and no matter how repressive the state became, no matter how intimidated and frightened we were, like Lolita, we tried to escape and to create our own little pockets of freedom.”

The other Nabakov book discussed with great fervour was Invitation to a Beheading. For the girls, this book revealed the personal nature of totalitarianism, of just how far repressive regimes can go to stifle imagination. The girls perceive Cincinnatus and Lolita as heroes for being able to withstand the hold their tyrannical masters had on them.

Though the focus of the book is meant to be the reading club, it develops into an exploration of how the students, Manna, Mashid, Yassi, Azin, Mitra, Sanaz and Nassrin deal with the restrictions of their society, how they joyfully peel off their dark robes before class, and how reading literature leads to an examination of the world around them. One, a divorcee with red nails (a no-no in the republic), is regularly beaten by her third husband, for being ‘used’ material because she has been married before. She cannot leave him because she has a young daughter, and the courts routinely grant child custody to husbands. Two of the girls are happily married. Sanaz is jilted by the boy to whom she has been betrothed since childhood presumably because after living in England for five years, he no longer wants the sheltered Muslim girl his parents have selected.

Ironically, when Sanaz goes on vacation with five girlfriends, the Revolutionary Guard arrest and jail the six of them for ‘western attitudes,’ and the girls are subjected to virginity tests. Yet another girl faces off a series of suitors for an arranged marriage, while she is considering immigrating to the United States to continue her studies.

Nafisi’s strong feelings about America and American culture, apparent throughout the book, appear to have been engendered during the 1970s, when she studied in the US. Nafisi returned to her native Iran after an 18-year stint abroad, but left for the US once again in 1997, to pursue a career at Johns Hopkins University’s School for Advanced International Studies. There is a sense that she grew up in an influential and privileged family, and was therefore offered much protection. It also explains her almost slavish admiration of all things American: “I had just returned to my home, where I could speak at last in my mother tongue, and here I was, longing to talk to someone who spoke English, preferably with a New York accent, someone who was intelligent, and appreciated Gatsby and Haagen-Dazs and knew about Mike Gold’s Lower East Side.”

It must be said that defending The Great Gatsby as literature that will set women free needs much imagination. Some of the parallels drawn are not very convincing, “Gatsby is killed. He is killed for a crime Daisy committed….Tom fingered Gatsby to the bereaved husband, who killed Gatsby as he lay floating in the pool waiting for Daisy to call. Could my former comrades have predicted that one day they would be tried in a revolutionary court, tortured and killed as traitors and spies?” What connects the two acts stretches the imagination.

All this focus on English literature begs the question: has Nafisi read anything at all of Persian literature? Why, despite the rich tradition of literature, poetry and films available in the Persian language, does Nafisi find so much meaning only in Anglo-American writing. The only real mention of the ‘other’ literature is the much clichÃ©d A Thousand and One Nights. While Nafisi is at her best when describing the gradual erosion of individual identity by a regime, she does not quite make as convincing a case for Lolita as a particularly appropriate prism through which to view the Revolution. In fact, throughout the book, the group finds many unlikely, far-fetched, almost forced parallels between Daisy Miller, Elizabeth Bennett, Lolita, and themselves. The most audacious is the play on the opening lines of Jane Austen’s Pride and Prejudice, “It is a truth universally acknowledged that a Muslim man, regardless of his fortune, must be in want of a nine-year-old virgin wife.” If this is not pandering to western stereotyping of Muslims then what is?