A series of 11 dramatic self-portraits by R M Naeem is called ‘Affirm Connection.’ It provokes the question as to what exactly is being affirmed and what are the connections being sought? Thus, there is an intellectual enquiry set in motion by the title of the show.

The canvases, painted in acrylic, include figuration, geometry and abstraction. The portraiture is dramatically foregrounded by the background of geometrical forms and abstract space.

The faces in the portraits have been bled of colour by being rendered in monochromatic greys. The features are recreated in fine detail with smooth brushstrokes. The detailed portraits achieve nearly perfect hyper-realism. They differentiate themselves from the coloured background with the impact of Classical Roman statuary. Despite the surgical precision of the precise strokes that delineate wrinkle and shadow, the expression on the faces is self-possessed, stoical even. Very little is being given away by these portraits with their enigmatic grey demeanour.

There are clues, however, that indicate the direction in which the artist is leading the inquiry. Varieties of clothing accessories including headgear and shawls, worn by the various personae, destabilise the notion that the artist’s face stands in as a representation of himself. Additionally, there are objects that contribute towards symbolism (or even remain inexplicable) such as a molecular structure of bonded atoms, a cube that floats in space with ‘Allah’ inscribed all over it, vertical shafts of light, etc. 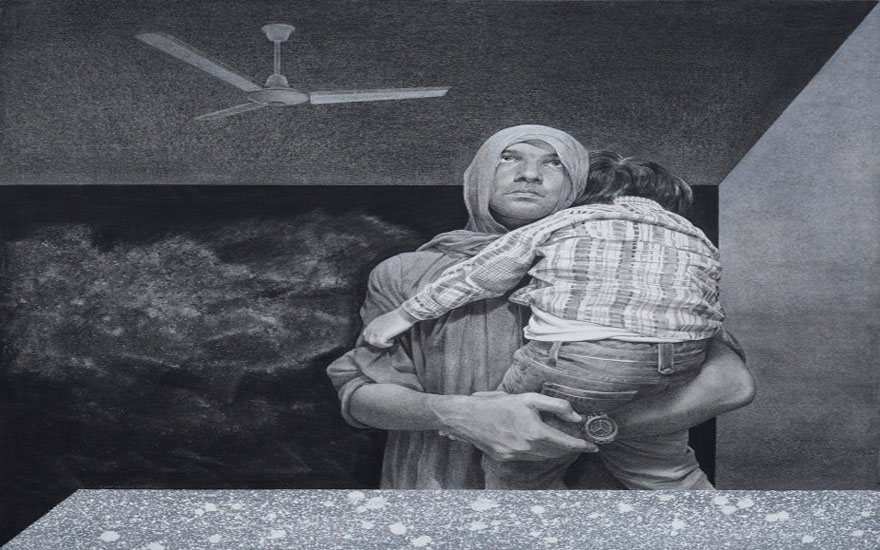 In ‘Under Construction,’ a man wears a turban and has two small constructions made of Lego bricks placed before him. One may extrapolate that this portrait suggests a construction worker.

‘You and Me’ portrays a figure draped in a chaddar which is imprinted with a horse motif. An energy saver light bulb hangs from a wire to one side. A configuration of puns perhaps…a male model in female garb; horse power and electric power; the idea of woman and energy? There are multiple inferences to be drawn.

In ‘Proud to be…’ a bearded man with an intent gaze has an image of a cow and calf emblazoned on his chest — a representation of a Nandi, which makes a tender allusion to Hinduism.

Equally tenderly, a mustachioed man with rustic machismo cradles eggs. With this protective gesture he belies the stereotypes associated with macho toughness.

One of the most enigmatic paintings in the series is ‘Just Five Steps.’ The face in profile is a mask-like cut-away with six-point geometrical patterning on the head. A step-stand with five treads floats above the head and is surrounded with tetrahedrons.

The power in this series of paintings lies in mental engagement. As in a mathematical equation, the self-image of the artist-as-model is the Constant and the various personae represented by him are the Variables. The portraits have to be “read” in conjunction with the objects in order to solve the equation. The emotional narrative has been minimised in favor of Apollonian rationalism.

By using his own image as a persona for the Other, Naeem draws attention to the nature of social stereotyping as an artificial construct. The initial assumption made by the viewer — that the portraits are self-referential — becomes untenable. The dissonance allows the viewer to step back and critically evaluate the processes going on in the artwork. 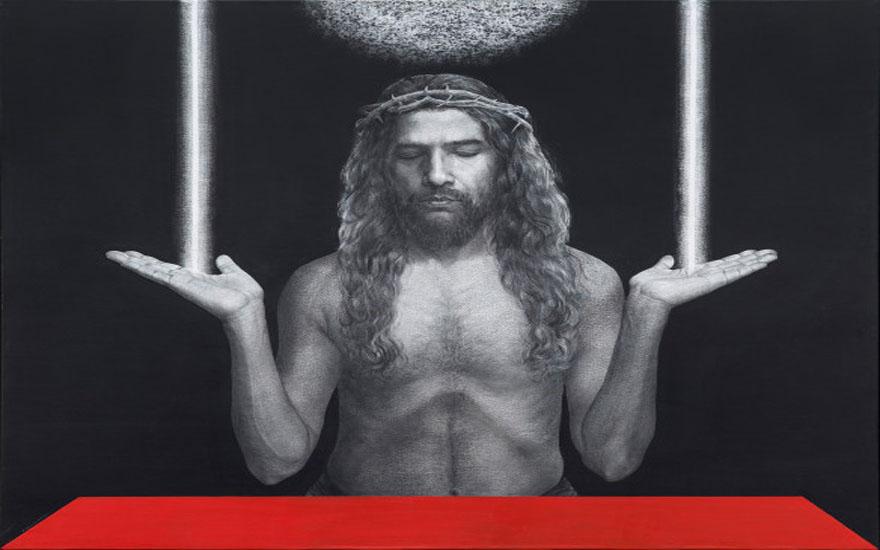 A brief conversation with the artist confirms that his aim is to represent diverse elements of the population regardless of social standing, gender or creed by using his own face as a model for Everyman. The inquiry created by the title ‘Affirm Connection’ becomes clear after one’s mind has processed and integrated the parts of the whole within each painting.

R M Naeem’s vision is a somewhat existentialist one in which the solitary individual, by being different, is contributing value in a disruptive world. The artist is taking ownership of the diverse individuals that comprise his social environment. He iterates the role of the individual, rather than the collective, as an essential building block of society. The art makes a strong statement in support of inclusion and tolerance as it affirms the connection with what is different.