Suhaee Abro learnt how to dance before she learnt how to walk. “My mother often tells me that when I was a few months old, I used to hear Indian songs being played on television and I’d try to move to the beat.” According to her, dance came to her before anything else, and she did not have to make a conscious decision to pursue it. “My parents did not even ask me about it; we all just knew that I had to dance.”

Suhaee has a glint in her eye as she talks about dance; it shows a passion that one rarely sees, especially in someone so young. “Many people dance just for fun, or as a form of exercise. They focus only on the movements and steps. But I am interested in the kind of dance which expresses some emotion or conveys some message.” Learning dance from the renowned classical dancer Sheema Kirmani from the age of seven, Suhaee, now 18, is skilled in Bharatanatyam and Kathak, two forms of classical dance. She is also interested in the contemporary and Sufi forms of dance.

Suhaee has been performing since she was eight years old. She recalls how clumsy she was back then. “I had my first solo performance when I was 12, and I was so nervous that my legs were shaking. At one point, I had to sit in a really difficult position, and I ended up falling. I improvised and started smiling, but it was embarrassing.” Such incidents only strengthened her resolve to become better and spurred her towards more vigorous practice. “Afterwards, I sat in that same position for hours to make sure I wouldn’t fall again.” After years of practice, Suhaee has also become good at thinking on her feet. “During a performance, anything can go wrong. The stage can be uneven; I can forget a step or even fall. But over the years I have learnt how to improvise.” Suhaee has come a long way. She is now a confident and graceful dancer, and a poised young woman.

Growing up as a dancer in a society that traditionally looks unfavourably upon the performing arts, Suhaee had to face bewilderment and sometimes ridicule from her peers. “My friends used to ask me, ‘Why do you dance? What would your future husband think?’ and I always wondered why I had to answer such ridiculous questions.” Her teachers also expressed their doubts when she told them she wanted to study dance. “They would say ‘Han woh to sahi hai, lekin parhna kya hai?’ They couldn’t comprehend that I wanted to choose dance as a profession.” Suhaee concedes that such incidents were hard for her, but gives full credit to her parents for always standing by her. “My father (Khuda Bux Abro) is a painter and my mother (Attiya Dawood) is a poet and a writer, so I grew up with a deep appreciation of all the arts.” With such supportive parents, other people’s opinions matter little to Suhaee.

Suhaee has also been acting in theatre and television since she was 12. “I’ve always loved acting, and I think dance and acting are quite similar so it came quite naturally to me.” Recently, she starred in Sanjha, a HumTV serial about a young Rajasthani girl who is forced into prostitution. Suhaee says she wants to play characters that are empowered and strong and she prefers stories that shed light on many issues of society that do not find a place in public discourse. “I don’t plan on acting extensively, so I can be more selective about my roles,” she says. “I don’t want to play frivolous characters. I’ve made an impression on people about what kind of artist I am, and I don’t want to break away from that.”

But Suhaee maintains that her first priority will always be dance. Since the last couple of years, she has also started choreographing her own dances. “I felt that it was time for me to step out of Sheema ji’s group, because there it was her choreography and her work. I respect her work a lot but I think the time had come where I had to discover my own style.” In 2010, Suhaee collaborated with another young dancer Rajab Saeed, and pianist Danish Jawed, to put together a performance that was held at T2F. That was the first time she choreographed her own dances and she has not looked back since.

And if dancing, acting and choreographing weren’t enough, Suhaee, along with her father, Khuda Bux Abro, and musician Ahsan Bari, has formed a performing arts group called Nritaal. This group, comprising young aspiring artists, aims to promote all performing arts, especially dance and music. “In our society, dance has yet to make a place for itself. People have more or less accepted music, but dance is still frowned upon.” Nritaal wants to put together dance performances accompanied by live music. The group’s debut performance, based on Amir Khusrau’s poetry, was very well received. However, it has been difficult for the group to get sponsorships. They now plan to do more commercial work in order to raise funds to put together their own performances.

After completing her A Levels from Lyceum School later this year, Suhaee plans to study classical dance at the Kalakshetra College of Arts in India. “I have been dreaming of going to this institution since I was very little.” She knows that it is a risk going abroad to study at a point when her career is really taking off. “Right now people have started noticing me, and I know that I can do a lot more work in the coming years.” But it’s a sacrifice that Suhaee is willing to make because she realises that studying in India will give her the opportunity to become a better dancer. 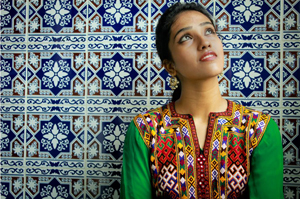 Somewhere down the line, Suhaee wishes to dance in front of a bigger audience. “Right now, only certain groups of people come and watch my performances. I want to see how the masses react to my dance and how they feel about my performance.” But first she wants to establish herself as a dancer abroad. “I think people here in Pakistan are more accepting of performing artists who are already established elsewhere.”

Looking back, Suhaee remembers a particularly special performance. “Sheema ji put together a dance performance for her mother, on her father’s death anniversary. It was a very emotional performance for all of us because we could see Sheema ji’s mother in the audience, and she was crying. This is the power of dance.”

This profile was originally published in the 2012 Annual issue of Newsline under the headline “Born To Dance.”