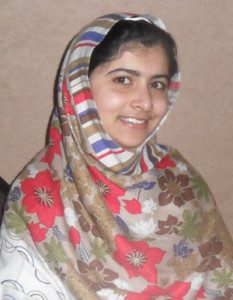 “The night was filled with the noise of artillery fire and I woke up three times. But since there was no school I got up later at 10 am. Afterwards, my friend came over and we discussed our homework. Today is 15 January, the last day before the Taleban’s edict comes into effect, and my friend was discussing homework as if nothing out of the ordinary had happened. Today, I also read the diary written for the BBC (in Urdu) and published in the newspaper. My mother liked my pen name ‘Gul Makai’ and said to my father ‘why not change her name to Gul Makai?’ I also like the name because my real name means ‘grief stricken’. My father said that some days ago someone brought the printout of this diary saying how wonderful it was. My father said that he smiled but could not even say that it was written by his daughter.”

Malala is the 14-year-old girl from Mingora, Swat, who was shortlisted for the International Child Peace Prize awarded by the Dutch organisation KidsRights. Every year, the prize is presented to an outstanding child whose efforts help in addressing problems and making a difference in the lives of other children. While it was a South African nominee who walked away with the prize, within days of Malala’s selection last year, her interviews inundated Pakistani TV channels and reporters poured down to the beautiful Swat valley to meet her on home-ground. YouTube and newspapers were buzzing with stories about the girl who wrote an anonymous diary for BBC Urdu under the pseudonym ‘Gul Makai’ and spoke of the atrocities meted out to the people of Swat under the heinous Taliban rule in 2008-2009.

“I was 11 years old and a fifth grader when I started writing for the BBC,” says Malala. Speaking toNewsline on the phone from Mingora, Malala confesses that her diary was very hard to write since the fear of the terrorists was so palpable. Despite the Taliban ban on girls’ education, Malala and her friends continued to go to school. “We would wear plain clothes and pretend that we weren’t students,” she says. Initially, Malala’s friends did not know she was the one who wrote the diary. “Later when they came to know, they told me that I was endangering my life but, still, they were happy that there was someone to speak up for them,” she says.

Malala is a confident young girl who speaks English and Urdu fluently, and is currently a student at the Khushal School and College which her father established in Mingora in 1994.

Malala has great plans for the future. She would like to become a lawyer or a politician, and if she ever came to public office she says she would “open more and more schools, colleges and universities so that no child remains illiterate. I want to see Pakistan as a democratic, social welfare state and its people educated, employed and given their rights.” Here’s hoping that all her dreams come true.

This profile originally appeared in the Annual 2012 issue of Newsline under the headline “Little Girl Big Dreams.”