Politicians and public figures around the world have public spats, but none do it with quite as much gusto as those in Pakistan. Fights here tend to be more personal, more humorous and just more incomprehensible than in the rest of the world. Take a look at some of those who made the list of top spats of 2011.

Mansoor Ijaz was known as a self-promoting businessman of dubious provenance when he wrote a column inThe Financial Times claiming that the Pakistan ambassador to the US used him as a back-channel diplomat to seek American help to rein in the military. His writings were written off as the delusions of an attention-seeker, especially by Haqqani in a series of off-the-record emails sent to journalists — at least until more credible people stepped forth to verify some his claims.

In the end, the oily-tongued Haqqani proved to be no match for the oily-haired Ijaz. Haqqani lost his job seemingly overnight and if Ijaz has his way, his 10 minutes of fame will be extended indefinitely. Haqqani is now being forced to defend himself in front of the Supreme Court in the scandal that has been christened Memogate.The scandal threatens to bring down the government, but Ijaz is now doing the talk-show rounds curiously claiming that his actions have saved democracy in the country. 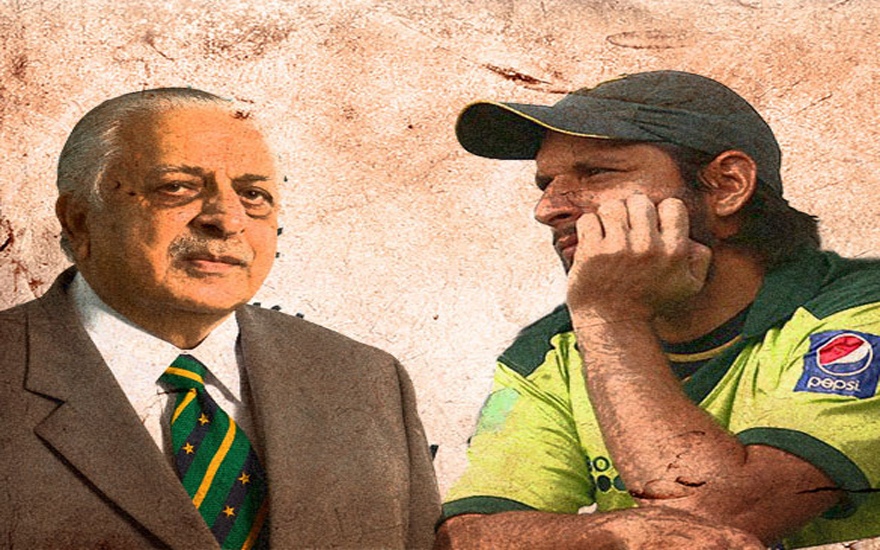 It is a testament to Shahid Afridi’s magnetic personality that he continues to be the hero of Pakistan cricket despite having a batting average that would get most mortals kicked out of the team. Only Afridi could retire from cricket for the third time and still return to the team a few months later after vanquishing his rivals.

After an unsuccessful outing in the West Indies, Afridi, still hurting at the World Cup loss to India, lashed out against ex-PCB chairman Ijaz Butt and coach Waqar Younis for undermining him and vowed never to play again until they were removed from their posts. Ijaz Butt was able to survive a terrorist attack against the Sri Lankan team, the spot-fixing scandal and a host of other scandals, but he couldn’t withstand the Afridi assault. Afridi is back as the glue of the team while Butt will likely never be heard from again. 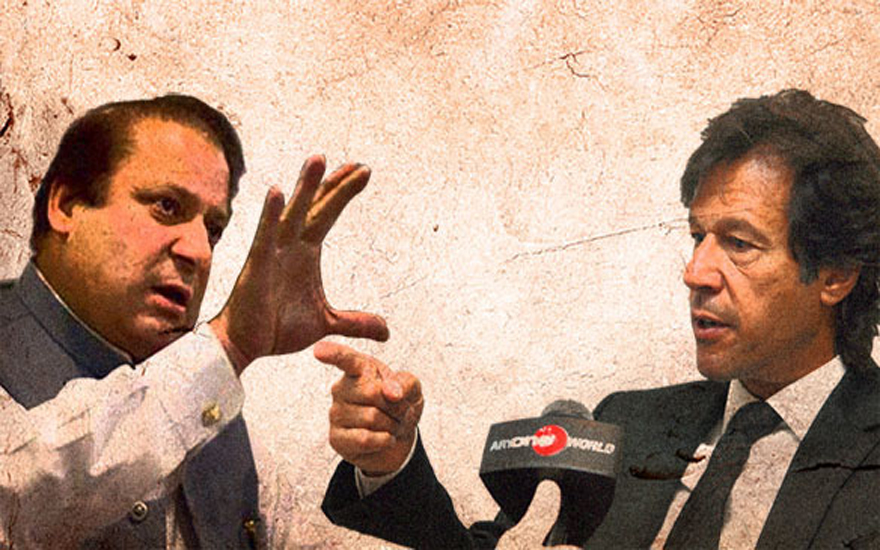 These two political foes achieved something quite remarkable this year: they exhausted all the cricket metaphors in their arsenal to smack talk with each other. Nawaz Sharif initially challenged Imran Khan to a ten-over cricket match to which Imran Khan replied that a club cricketer should not go up against a test-cricketer. Either Imran Khan took Nawaz’s words too literally or he truly believes that he has more political experience than the former prime minister.

By the time of the Karachi jalsa though, Imran had mastered the art of puns. In his address to the Karachi public, he not only agreed to play this ten-over match but advised Nawaz to schedule it soon lest he finds himself without a team — an obvious reference to PML-N heavyweight, Javed Hashmi, defecting to Imran Khan’s party. When a reporter asked the PML-N leader what his thoughts were on Hashmi now playing for Imran’s team, Mian rather woefully said, “Achha hota agar woh khuda hafiz keh kar jaate.”

Imran might have won this match, but the series is not yet over. And the public awaits the next elections to see if Imran Khan will get the two batsmen (Nawaz Sharif and Asif Zardari) out in one ball as he had promised in his Lahore jalsa or if Nawaz will deliver a political inswinger that will clean bowl Imran. 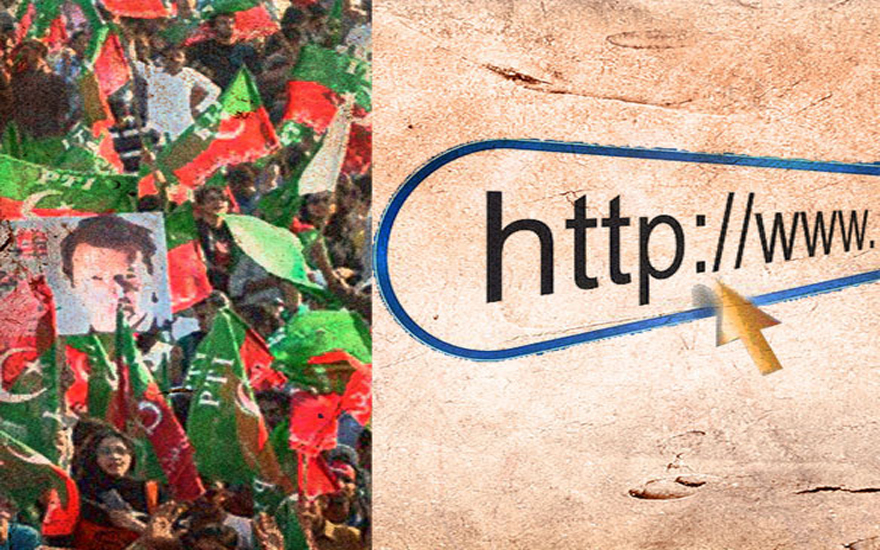 PTI Supporters versus the Internet

After years of irrelevance, Imran Khan and his Pakistan Tehreek-e-Insaf may finally be an electoral force. And if you ever write anything remotely negative about him or his party, a legion of Internet warriors will let you know about it — very loudly and very rudely. These Internet trolls have been the flipside of Imran’s rise, so vitriolic in their hate that they have even turned off neutral observers.

The PTI image was being dented so badly by their online fans that Arif Alvi of the party had to issue a message asking them to tone down their rhetoric and not to resort to rudeness to defend Imran. Even talk-shows began discussing this phenomenon, showing that the PTI Internet problem had hit the mainstream. 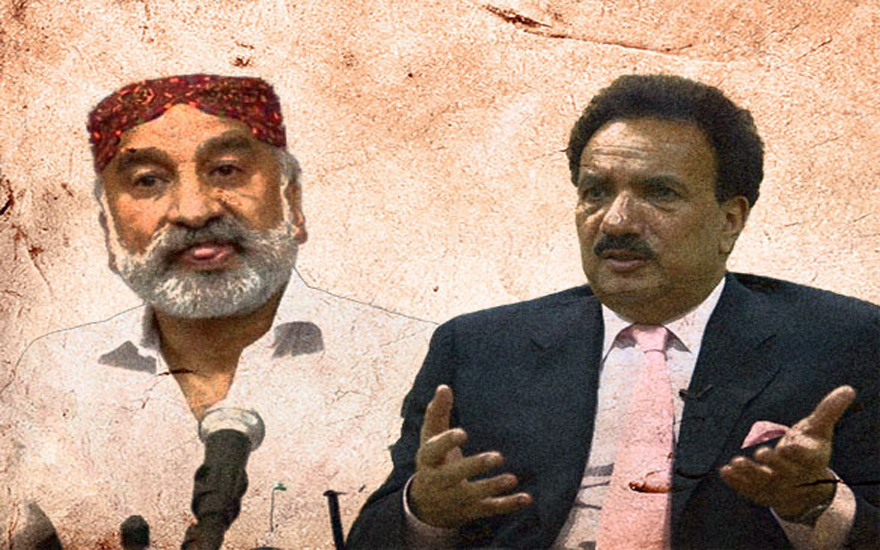 Politicians certainly love the sound of their own voices.But what they don’t usually do is deliver speeches with a Quran on their heads or litter their rhetoric with colourful analogies. Zulfiqar Mirza’s resignation speech was a tour de force and 2011 saw a long list of spats involving the former Home Minister: Zulfikar Mirza vs. unsuspecting TV reporter at press conference; Zulfikar Mirza vs. Altaf Hussain; Zulfikar Mirza vs. the entire Urdu-speaking community, etc. But lest 2011 ends with Zulfikar Mirza vs. Newsline, we’re just going to focus on one specific spat, which was perhaps the least expected of the lot.

In his infamous press conference in Karachi, much of Mirza’s vitriol was directed at Interior Minister Rehman Malik, a man Mirza claimed was a congenital liar. The diatribe was long and hard-hitting, but in an interview later Mirza shared, “Mein nay uss ki sirf pant utaari hay, uss nay abhi bhi underwear pehna hua hay.” The Pakistani public thanks Mirza for sparing us the details. But in spite of his hatred for the interior minister, Mirza magnanimously declared that the latter would be a top-notch politician if he just reduced lying by 50 percent. Malik, for once in his lifetime, took the high ground, simply saying that Mirza was a friend and that he denied the charges levelled against him. Mirza might have won the hearts — or at least the laughter — of those who heard him but he’s the one out of a job while Malik continues to hold his post. 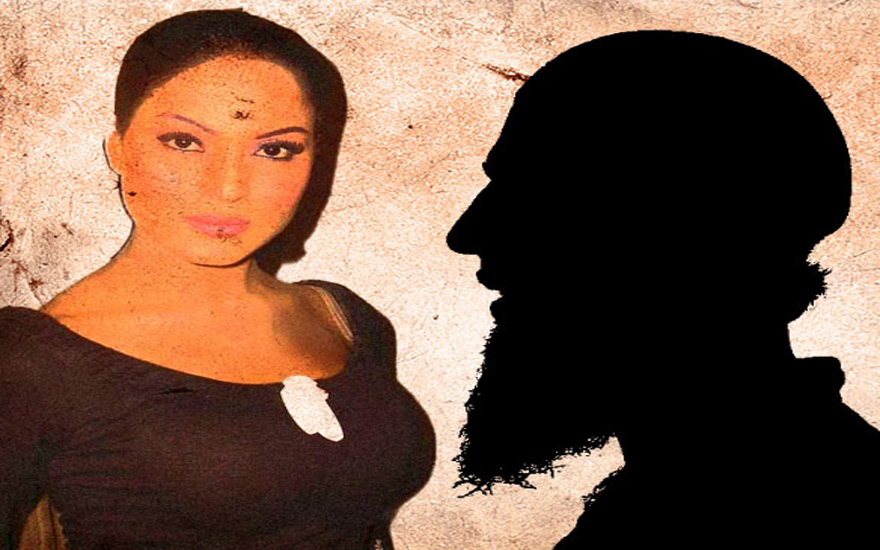 2011 was bookended with the Veena Malik scandals. The year began with a Maulvi confronting her on TV in what was probably intended to be a public reprimand for her escapades on the Indian reality show Bigg Boss. But Veena Malik wouldn’t have any of it. Nobody expected Veena to take criticism lying down, but her unfiltered comments about religious leaders surprised everyone and ultimately won her many supporters. Flicking her perfectly blow-dried hair back, Veena berated the Maulvi for questioning her morality when Pakistani politicians were getting away with murder and corruption. She also accused the maulvis of the country for not standing up against sexual abuse of children in madrassahs. Even those who were not particularly impressed by Veena Malik’s foray into reality television suddenly took note of her courage in confronting the moral brigade and many Pakistani liberals became card-carrying Veena Malik fans.

Things eventually died down — or so we had thought. Suddenly in December, an Indian men’s magazine FHMfeatured a nude Veena, with a fake ISI tattoo on her arm, on its cover. All hell broke loose and Veena was back to being the talk of the town. Initially Veena claimed the cover was photoshopped and said she planned on suingFHM. But after days of he said, she said, Veena acknowledged, “I admit that I have done a bold shoot, but I was not nude. There is a big difference between posing topless and nude.” Once again, Veena was in the public eye and the country’s morality police found themselves internally conflicted between shaming Veena and Googling her controversial photograph. 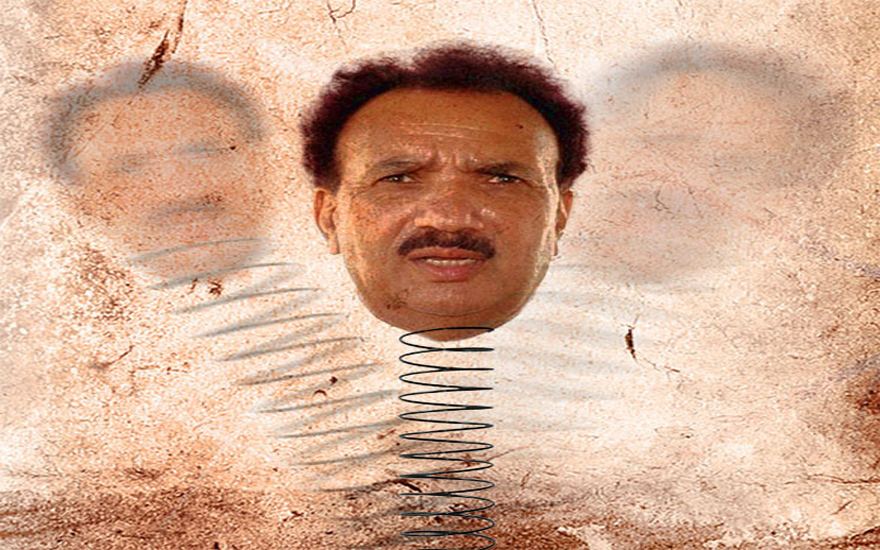 Rehman Malik versus The voices in his head

No one quite knows what Rehman Malik is thinking at any given time. So prone is he to issuing head-scratchingly bizarre statements that one can only assume that he is at war with himself, wondering if he should say exactly what is in his head, no matter how insane.

Consider just a couple of examples: after the PNS Mehran airbase attack in Karachi, Malik decided to go to the scene and explain to reporters how these attacks were carried out by sophisticated terrorists who were like something out of a Star Wars movie. Or after the spate of political violence in Karachi, which Malik attributed to jealous wives and girlfriends taking revenge on their philandering men. Here are just a handful of his quotes from 2011:

“There is no availability of Osama bin Laden in Pakistan.”

“If (Veena Malik) did pose then it was very wrong. But you can never be sure with photographs. Sometimes news channels put my face on different bodies and show me on a cycle or a donkey. Or under a car. But I was never there.”

“The (PNS Mehran terrorists) had sharp features and small beards. Maybe one inch. And they were dressed likeStar Wars characters.”

This feature originally appeared in the Annual 2012 issue of Newsline under the headline “Spats of the Year.”