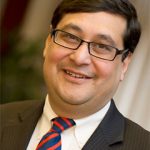 Dr. Adil Najam is the founding Dean of the Pardee School of Global Affairs at Boston University and a former Vice Chancellor of the Lahore University of Management Sciences (LUMS) in Pakistan.

The problem with history is that it just keeps happening. Most of the time, it happens and few take notice. At least not until it is too late. At other times, although not very often, history goes into overdrive and it cannot be ignored. This is such a time.

It would be both, premature and pompous to proclaim that a new New World Order has emerged. But it is clear that whatever the world order was, it is now imploding before our eyes. 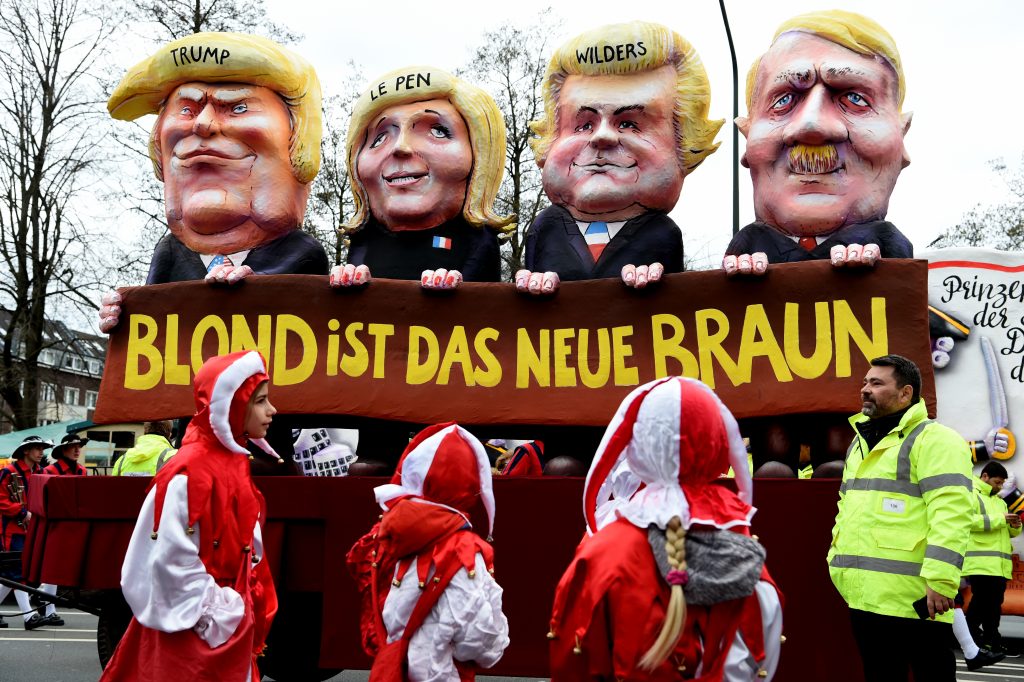 However, those who had long lamented — not without justification — that the world order was unjust, hypocritical and callous, should heed caution before they break out in celebration. Implosions, after all, are messy affairs. And what seems to be emerging, at least for now, is even less fair, blatantly dishonest, and certainly not compassionate. In fact, it is anything but.

Like passers-by who are simply incapable of looking away from a car crash, our morbid curiosity keeps us fixated on the latest tantrum from Trumpland, or the newest Brexit brouhaha. Deeply consequential, even phenomenal, as America’s choice of Donald Trump and Britain’s decision to Brexit are, they are not in themselves the phenomenon. They are, instead, the most shocking manifestations of a much larger, and global, phenomenon. Possibly the beginnings of a new global normal. Maybe even the beginnings of a New(er) World Order.

This phenomenon that I suggest, comprises of at least four key dynamics.

The politics of anti-politics

If not itself the root, very close to the root of the phenomenon we are living through, is a politics of anti-politics. A deep disdain, not only for politicians, but for the idea of politics. All around the world, almost without exception, one finds politicians being lambasted and politics being portrayed not just as a bad word, but as an essentially vile act.

The irony is that more than all others, it is those in the political arena who have cultivated and nurtured this disdain. Whether it is Washington, Westminster or Islamabad, politicians love nothing more than to proclaim that they are, in fact, not politicians. That they will usher in politics that will, in fact, not be politics.

For too long, and in too many places, especially Pakistan, such disdain for politics was prima causa for military takeovers. Increasingly, across the globe and in Pakistan, the mantle of anti-politics is not the military’s alone. Anti-politics has suddenly become everyone’s preferred slogan. Where the old has been certified as despicable, one has no option but to promise something ‘new.’

But anti-politics brings with it the rise of the anti-politician. A Donald Trump in the United States. A Rodrigo Duterte in the Philippines. A Hugo ChÃ¡vez in Venezuela. Politicians, yes. But ones who are out to destroy politics — including that which is, in fact, noble in politics. 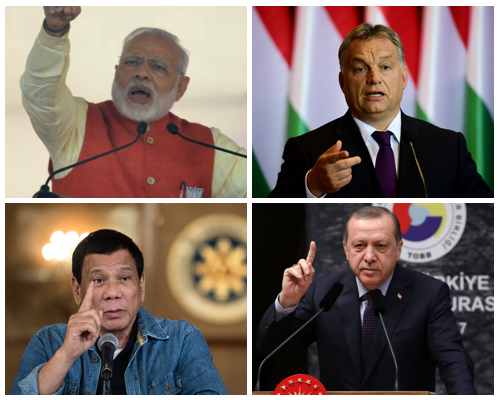 A Demand for Authoritarianism

All across the world, we see people demanding “strong leaders.” Autocrats, really. The market for authoritarianism is hot. Xi Jinping in China. Vladimir Putin in Russia. Recep Tayyip ErdoÄŸan in Turkey. Narendra Modi in India. Viktor OrbÃ¡n in Hungary. Donald Trump in America. The list can go on. But two things should be noted. First, about half the world’s population, about three-fourths of the world’s economy, and about four-fifth’s of the world’s military is now under the control of one ‘strongman’ or the other; each inclined to demonstrate power by deploying it. Some itching to fight a ‘manageable war.’ And at least one, Mr. Trump, asking why we make nuclear weapons if we are never to use them!

Second — and this is even more important — this generation of authoritarian leaders is not in the same mould as Robert Mugabe in Zimbabwe or Jacob Zuma in South Africa, who ‘turned into’ autocrats over time. The new wave is of leaders who were elected because their authoritarian streak was considered a strength by their constituencies.

It is the global demand for authoritarianism that is most disturbing. A demand that derives from a climate of fear and insecurity and a surfeit of weak and ineffectual government institutions. That only a ‘strongman’ can make these institutions strong and effective is a fool’s hope. Yet, tragically, the very same illogic of illiberalism, that has so often made military rule appeal to many Pakistanis, is now at work in the world’s largest economies and democracies: it is okay to sacrifice some of our freedoms for the sake of security, stability and effective institutions.

The Rise of Ultra-Nationalism

Brexit was not simply a knee-jerk reaction to the bureaucratic excesses of the European Union; it was a backlash to globalisation. Globalisation has also defined the protectionist rhetoric of Trump’s America and given new breathing room to old reservoirs of bigotry, racism and discrimination. Rather ironically, the same forces of globalisation have been central to defining the imperial ambitions of Xi Jinping’s China and the chest-beating bravado of Narendra Modi’s India.

Across the Muslim world, including Pakistan, sectarianism prospers and puritanicalism thrives in a tempest of religiously-defined ultra-nationalism. In Russia, ultra-nationalism feeds on a sense of having been wronged by the breakup of the Soviet Union during the Cold War. Across Europe, ultra-nationalists wrap themselves in hyper-sensitivities about immigration and security. The continent remains embroiled in its own violent angst, but the winds are clearly behind the sails of ultra-nationalists like Marine Le Pen in France, Geert Wilders in the Netherlands, Matteo Salvini in Italy, Harald Vilimsky in Austria, and, of course, Viktor OrbÃ¡n in Hungary. The murmurs from Asia and Africa often appear as talk of ethnic identities, while in Latin America they tend to appear in the guise of ideology. But, everywhere, the disquiet is real. 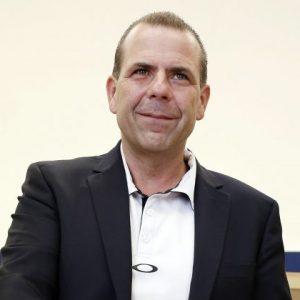 Ultra-nationalism has now begun eroding some of the very instrumentalities by which this tendency had been managed in the past. Most prominent is the erosion of multilateralism. The two grand experiments of our generation — the European Union and the United Nations — are both under strain. Equally telling is the decay of the Left-Right political spectrum that has been the staple of understanding and managing political divisions for a century. Today, it is difficult to name too many countries where the main fault-lines of politics can be defined in simple ‘Left-Right’ terms. Certainly, it is difficult to do so in Pakistan.

Information technology is the most important enabler of our post-truth society and the architect of the techno-populism that has become a global political force.

The post-truth society we live in is a child of information technology. After all, the best place to bury truth, is noise. The sheer volume and variety of available information is so great that it can completely overwhelm our ability to comprehend, let alone analyse. Information can make us feel more connected, but it can also distract us. Under such conditions, information can sometimes become an impediment rather than a contributor to wisdom. Without wisdom, there is no truth.

Where attention spans are short, the flow of information fast, and truth irrelevant, populism will thrive. When there is no mechanism to determine what is ‘right,’ the number of prominently displayed ‘likes’ become a poor substitute for truth and an intoxicating fillip for the populist. Mr Trump became the ‘Emperor’ of Twitter for the very same reasons that Mr Modi was proclaimed ‘King of Selfies.’

Our times and technology have made the spectacle easy to stage and to share. Mr Putin had his shirtless horse-riding, Mr Modi his larger-than-life holograms, and Mr Trump his walk through a wall of smoke and light. All of them understood that there can be no populism without distraction. Others understand it too. And this means that populism now has the advantage in world affairs and we should expect to see more of it, not less.

And if all said is at all correct, then we have a world that is being, and will be, defined by the rise of the anti-politician, aggressive authoritarianism, ultra-nationalism, and populism.

Is this the emergence of a New(er) World Order? Maybe. But it seems much more likely that it is the return of an Old(er) World Order. And that, a rather medieval one.