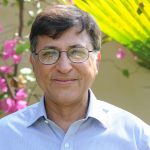 Pervez Hoodbhoy has a PhD in nuclear physics and is currently a member of the UN Secretary-General’s Advisory Board on Disarmament Affairs.

India can never dream of attacking nuclear Pakistan, says the Pakistan army. Pakistan has long reserved the right to use nuclear weapons first in a conflict, but last year, Defence Minister Khawaja Asif went a step or two still further: nuclear weapons are not just “showpieces,” he said, “we can use them to annihilate India.”

The Indian military also says that Pakistan will face annihilation if it dares to use its nukes. So far, it has formally espoused the No-First-Use (NFU) doctrine. But, outraging Japan and drawing the expected response from Pakistan, Indian Defence Minister Manohar Parrikar, and others, have recently argued that India must abandon NFU in favour of “responsible use.” Then, in January 2017, Indian army chief, Bipin Rawat, dropped a bombshell by reaffirming the existence of the military’s Cold Start strategy. 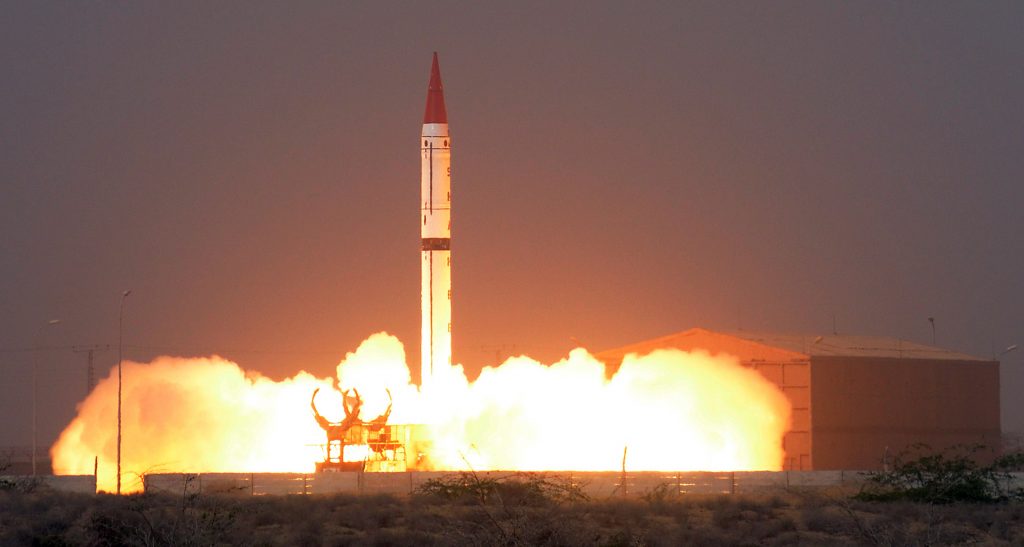 Floated in 2010 by the-then chief, General (R) Deepak Kapoor — and thereafter alternately denied and asserted — Cold Start calls for chopping Pakistan into “salami slices” as punishment for hosting yet another Mumbai-style attack inside India. It envisages a state of readiness where Indian-armoured columns are perpetually poised to move rapidly into Pakistan, seizing land that could later be bartered for concessions. In response, Pakistan began development of the small-yield tactical nuclear-tipped Nasr missile. Ensconced inside a multiple-barrelled mobile launcher, the four 60-km range missiles are said to carry warheads, each roughly one-tenth the size of a Hiroshima-sized weapon.

Tactical nuclear warfare represents a quantum shift away from Pakistan’s original ‘nuke-for-nuke’ nuclear doctrine. Nukes are now seen as weapons of war and not just a means of last resort. To deter incursions by Indian tanks, Pakistan has small-yield nuclear weapons that it is prepared to use on its own territory. India’s response has been that any use of nuclear weapons against its forces — even if it is on Pakistani territory — constitutes a nuclear attack. Whether struck by a micro-nuke or mini-nuke or city-buster, and whether on its own soil or outside its borders, India will consider itself under nuclear attack and react with full force.

Short of actual war, the rhetoric can’t get uglier. And now citizens on both sides often echo the threats bellowed by their civil and military leaders. For example, at the Karachi Literature Festival in February 2017, I heard a former Pakistani High Commissioner to Britain — reputedly a liberal — grandly declare from the stage that having a nuclear war was preferable to living as a Muslim in Modi’s India. I had to remind him from the floor that Muslims are having a far harder time going to their mosques and shrines in Pakistan than in India.

But, curiously, most South Asians are quite indifferent to the possibility of a nuclear war; war talk splashes like water off a duck’s back. Seized by Panamagate, suicide bombings, dharnas, and night after night of mudslinging on TV talk shows, Pakistanis have little time for existential issues. The Indian public, too, has plenty of entertainment in the form of the travails of its politicians, Bollywood stars and billionaires. And then there’s demonetisation, which has left millions of Indians dazed.

So the good news is that neither country has the time nor interest in nuclear war. Indeed, Pakistan and India have not had a threat of a major war since May 1998, when India tested its nuclear weapons and Pakistan followed suit 17 days later. This is in spite of tensions spiking after Pakistan’s secret Kargil invasion in 1999, the attack on the Indian parliament in 2001, Mumbai in 2008, Pathankot in early 2016, and Uri in late 2016. But, after all was said and done, everything ultimately cooled off.

The bad news is that what worked earlier is not guaranteed to work forever. The pathways to nuclear conflict are several, and not all are foreseeable. But let’s take a quick look at the more obvious ones.

First, another Mumbai-scale attack could elevate tensions to the point where decision-making becomes unpredictable. Certainly, it would be irrational for India to risk its annihilation, regardless of whether two or as many as 10 times the number of its citizens are killed in a future act of terrorism. But in the heat of the moment, who can say what might happen? Once initiated, a tit-for-tat nuclear exchange could continue until every single weapon, small and large, is used up on either side. It is difficult to imagine how any war-termination mechanism could work even if, by some miracle, the nuclear command-and-control centres remain intact. 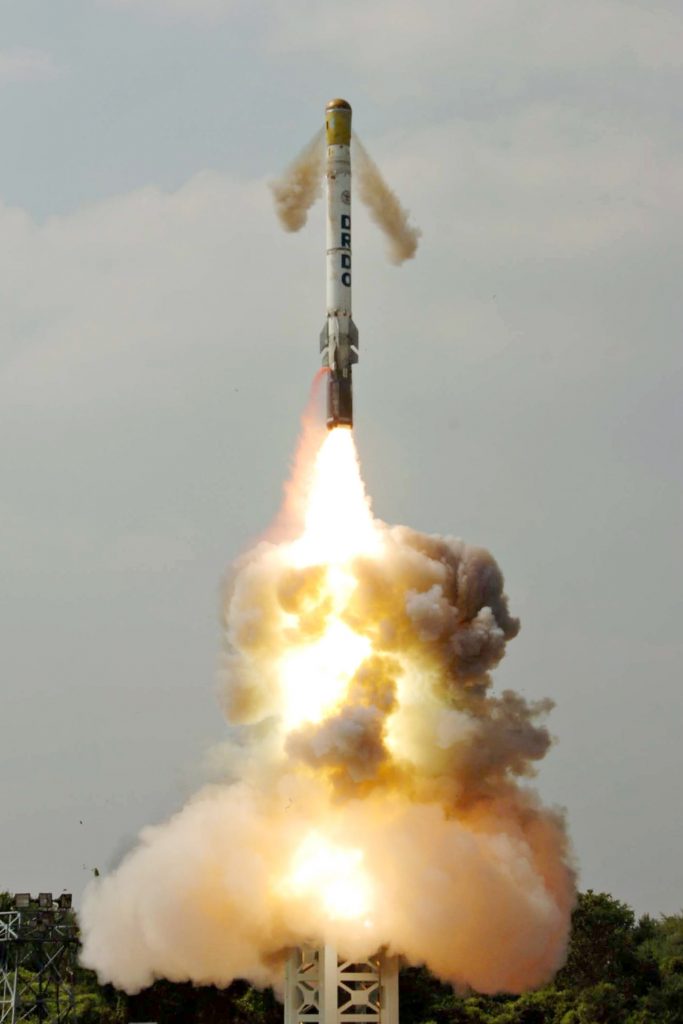 Observers agree that Mumbai was critical in determining nuclear postures on both sides. But earlier on, Pakistan did not seem to care. It had strenuously denied that the Lashkar-e-Tayyaba or that Hafiz Saeed, its founder-leader, were responsible for the attacks. Heading the Jamaat-ud-Dawa, ostensibly a charity organisation, Hafiz Saeed also ran Islamic courts in several Pakistani cities and was seen leading funeral prayers for the martyrs who died fighting Indian troops in Pathankot and Uri. For years he appeared to have a free run, protected by the deep state, prompting India to dub Pakistan as the host of an “Ivy League of terrorism.”

But then, something seemed to have stirred. In January 2017, Hafiz Saeed was suddenly put under house arrest. Speculation abounds as to why. Was it fear of yet another adventure by his troops that might trigger a harsh Indian response? Or was it Pakistan’s desire to stay off Donald Trump’s dreaded list, one which would deny Pakistani citizens entry into the US? Some analysts claim that the Chinese have finally convinced Pakistan that China cannot indefinitely prevent Hafiz Saeed — who carries a $10 million bounty on his head — from being declared an international terrorist.

We are not likely to find out the truth behind Hafiz Saeed’s house arrest, at least for a while. But if Pakistan has responded only to external pressure, then this would not signal a change of behaviour. This is unfortunate because the domestic consequences of hosting armed jihadist groups on Pakistani territory have been devastating.

Second, India’s suspension of the Indus Waters Treaty, or perhaps a flagrant violation that cuts off large volumes of water to Pakistan, would doubtless yield a severe reaction. Threats to this effect have grown after the Pathankot and Uri attacks. Over the last several weeks, Prime Minister Modi has been projecting his tough image before voters across India, declaring that “blood and water cannot flow together.” While campaigning in Punjab, he declared, “We have decided to route the water from the Indus — which currently flows into Pakistan, that does not have the right over this — to the farmers of Punjab, who rightfully deserve it.”

It is unclear what Modi hopes to achieve — beyond gaining popular votes — by such open bellicosity. Surely he must know that waters from the Indus are vital to Pakistan. Abrogating an internationally negotiated treaty that has held for over half a century, would constitute an act of war.

Third, there is the ever-present possibility of misinformation, miscalculation and rogue launches leading to an accidental nuclear exchange. No one can estimate the chances of this happening. But let us recall General Zia-ul-Haq’s famous remark, made soon after the crisis precipitated by India’s Brasstacks exercises along the Pakistani border in 1986, that “neither India nor Pakistan wanted to go to war, but we could have easily gone to war.”

The possibility of an accidental nuclear war is not taken seriously in Pakistan, and probably not in India either. But it was never derided and dismissed during the years of US-Soviet nuclear confrontation. On the contrary, both sides took this possibility very seriously. To avert a false move during those five long decades, the two nuclear rivals spent trillions of dollars acquiring the most sophisticated forms of intelligence-gathering via satellites, aircraft, ships and submarines. The data from these were continuously analysed, using computers equipped with artificial intelligence programmes. This enabled both sides to know each other’s level of readiness for combat.

Without such an elaborate command-and-control system, a doomsday nuclear confrontation may well have occurred out of fear, or suspicion. Nevertheless, in spite of all such precautions, false alarms — some of which seemed close to genuine — could not be prevented. There are several lessons from these experiences for all who care to learn. First, even the best technology is not good enough when the issue is whether to use or lose your nuclear weapons. Second, human intervention — either through malicious intent, ideological fervour, inexperience, or plain stupidity — can render the best plans and technology, impotent.

The South Asian nuclear confrontation brings a special urgency to both sets of issues especially now that a brand new threat has emerged, namely, cyber espionage and cyber warfare. A single USB stick containing the Stuxnet American-Israeli cyberworm was smuggled into the Natanz nuclear facility in Iran in 2010, and destroyed about a thousand centrifuges. This was a major setback for the Iranian nuclear programme.

Cyber techniques can be designed to either disrupt, or even initiate, the use of missiles and nukes. Across the world today, there is massive reliance upon electronic means — both in the production, as well as in command-and-control of conventional and nuclear weapons. While creating an ‘air gap’ — ie. isolating all sensitive systems from the internet — might seem to provide a solution, Stuxnet shows even this precaution can be overcome. Pakistan and India have yet to realise the seriousness of cyber attacks upon their nuclear reactors, and as systems linked to their nuclear weapons.

Wars are fought to be won, not lost. At the end of a nuclear confrontation, both India and Pakistan would surely win, having taught the other a terrible lesson. But neither would remain habitable.