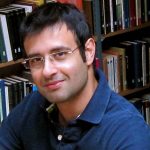 The writer is a journalist based in Pakistan and currently works at Newsline.

All six members of the Lyari Underground (LUG) congregate in the home of bandmate ‘Danger Baloch.’ Sitting on the floor of an empty room, the group’s founder and lyricist, ‘Anxiously,’ whose real name is Abdul, tells me about how he is inspired only by old school hip-hop. Yet when I ask him if he would tweet his songs to Dr Dre, he seems wary at the mention of social media. “Fame is not our goal,” comes the contemplative reply. Anxiously is quiet, introspective and humble in demeanour. When he does speak, he makes each word count, as if it were a lyric. “Nor are we interested in ‘mainstream appeal,’” he says. “We are artists who reflect reality.” 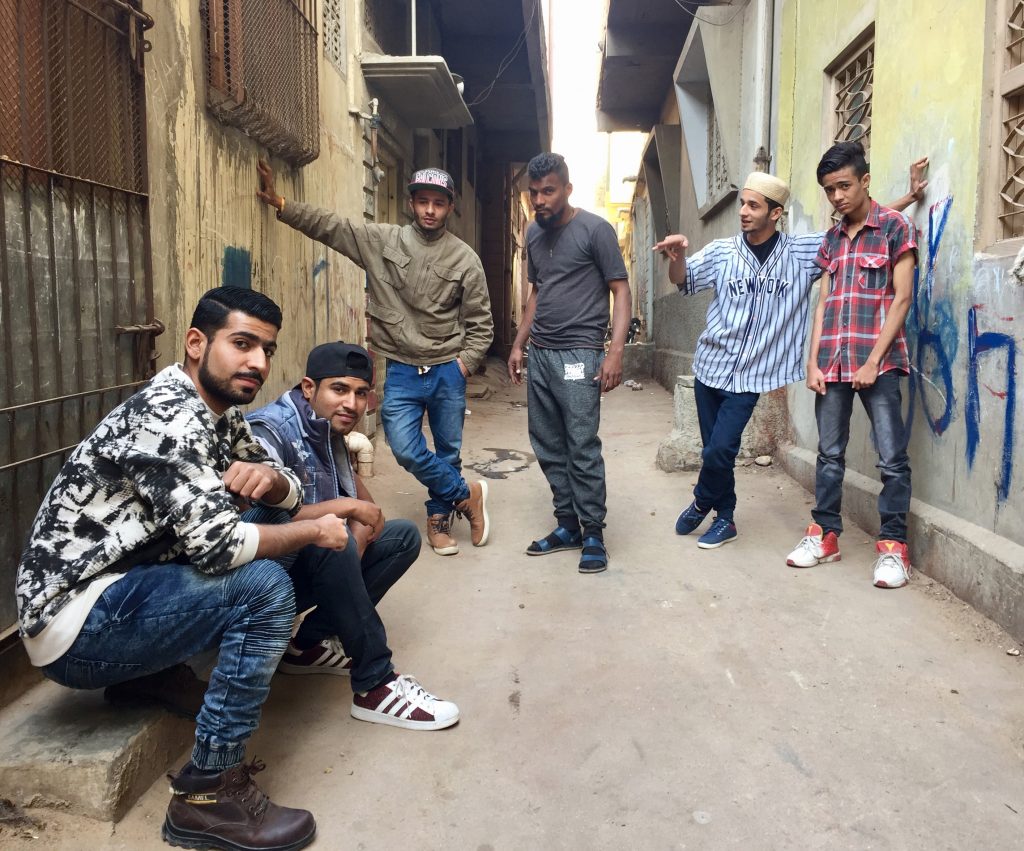 Members of the Lyari Underground.

His response echoes the attitude of many struggling artists who profess they choose not to follow the herd on social media, which they see as superficial and fleeting in nature. That notwithstanding, even they must recognise the potential value of social media: internet-based platforms such as blogs, streaming services, video-hosting sites and apps, provide blank canvases for artists to exhibit their work.

And so, when an online music streaming service called Patari contacted LUG on Facebook, they did not hesitate to respond. The service offered to pay for the production of LUG’s music and release it through its platform, thereby enabling LUG to give the public a taste of Lyari’s lesser-known side as a boiling pot of creativity and talent. Despite their reservations, the musicians had to acknowledge that it was social media which enabled first contact.

When LUG’s single, ‘Players of Lyari,’ started streaming on Patari Tabeer, it became very clear that this was a group that didn’t buy in to the ‘ratchet’ sound of the Dirty South that has dominated hip-hop for years. Instead, the track sounded like ’90s gangster rap and its music video on YouTube was reminiscent of NWA songs like ‘Straight Outta Compton.’

“The first hip-hop song I ever heard was Tupac Shakur’s ‘Hit ‘Em Up!,’” recalls Anxiously. There was something in what he heard that sounded familiar. The sentiments and attitudes in the song were no different to those in the environs of gang-infested Lyari, one of Karachi’s blood-stained neighbourhoods. Every Pakistani hip-hop fan has at some point made a similar connection between rap capers of conflict and the instability of local urban centres in which they grew up.

LUG’s vision and integrity were not compromised by the fact that social media was used to initiate contact, or that music and video platforms were used to display its art. On the contrary, these only furthered the group’s reach.

Founded in 2015, Patari currently hosts upwards of 2,500 artists from all over Pakistan, out of which 300 or so are not associated with a record label. Prior to being signed to Patari, these 300 artists — of which LUG is one — used to upload their material to sites such as SoundCloud or YouTube, but lacked a distributor. 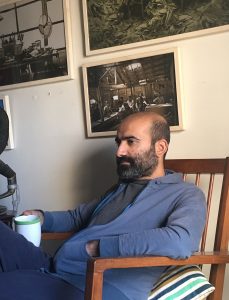 “We provide the distribution,” explains Zeerak Ahmed, product designer at Patari. “Patari Tabeer is an original music series that we have funded, to find unsung voices and have them record in studios and release their music through a platform. We take the profits generated from Patari’s service and distribute them among artists according to how often their music is heard.”

In fact it was the voice of a janitor that lead to the creation of Patari Tabeer. The story makes for an ideal Hollywood script. Nazar Gill was a humble cleaner in Islamabad’s Park Towers but his passion was to sing. Gill had seen Ahmer Naqvi [now COO of Patari], a resident of Park Towers, on TV. He decided to try his luck. “I sang ‘Jugni’ to Ahmer Naqvi in person, in his apartment,” Gill tells me. Ten months later, he got a call from Naqvi, asking him to sing for Patari Tabeer. “Thanks to Patari and Ahmer Naqvi, my dream of singing for a wider audience has been realised,” he says.

The fact that a blue-collar worker who grew up singing hymns in church has gained recognition with his ode to Prophet Muhammad, says something about art transcending religious and class divides. Just as they can and often do spawn retrogressive and hate material inciting violence, internet-based platforms can also enable such a transcendence.

UG is not the only beneficiary of social media. The Karachi Walla has become a byword among anyone interested in Karachi’s architectural and cultural heritage. This is because through his blog, Farooq Soomro unearthed an unseen, forgotten face of Karachi. Over a cup of tea at his favourite haunt, the Roadside Cafe, Soomro tells me that it was while he was away from Pakistan, living and working in Kuwait, that he first developed a curiosity about his country.

“When I moved back to Karachi in 2010, I started working for an oil and gas company where I felt like a complete outsider. So on the weekends, I would fill the vacuum by exploring the city,” he recalls. “The first site I documented was Flagstaff House.” To his dismay, the information sources on the internet were contradictory and there were only three photos of the site. It was then that Soomro, inspired by Delhi-based journalist Mayank Austen Soofi’s blog, ‘The Delhi Walla,’ decided to document his experience on a blog. He also started putting up his photos of Karachi on Facebook.

At first, Soomro was hesitant about taking up the responsibility. “I wasn’t a journalist and wouldn’t have time to write, what with a full-time job,” he recalls. But he drew solace from the belief that no one would read his blog anyway and therefore there was no pressure. He could write as he pleased. “In those early days, I discovered that various organisations that were involved with heritage sites across Karachi, had a great deal of information on those sites. They made tall claims that they would one day create a portal for the public to access their information and photos. What I didn’t understand was why the information couldn’t be shared immediately,” he explains. “This convinced me of the urgent need to write and share photos on my blog.”

Soomro clarifies that the blog documents his personal impressions of Karachi and is by no means an academic study of the city’s heritage. The focus is to give you a feel of the sites explored. And it is precisely in this that the blog created a niche for itself. “My article on Mitha Ram Hostel of DJ Science College, in 2011, was the first piece that received an enthusiastic response,” recalls Soomro. “In the comments section, the alumni of the college started a discussion on how to preserve the old site. Members of the alumni started connecting with each other, after having been out of touch for years. It was then that I realised the power of having shared this information,” he reflects. As time passed, overseas Pakistanis, while visiting Karachi, would write in and request to join Soomro in his explorations.

One of the strengths of a blog as a medium is that it is not constrained by the rigid rules and practices of mainstream media. “You will never find such a large collection of photographs in the mainstream media,” Soomro points out. He believes that Karachi is a city of untold stories, which is why novelists are gravitating towards it. Back in 2010, he says, there was little data in regard to photos and information on the landmarks of Karachi. Internet-based platforms such as blogs and social media filled this void.

The blog opened up doors for Soomro, enabling him to network with and learn from others who shared his interests. It also served as a license, increasing his chances of getting access to sites that were otherwise inaccessible, such as the Karachi Theosophical Society.

“Social media is leading to a change in our behaviour and this is one reason why many people criticise it,” Soomro explains. But, he argues, it would be naive to write it off. “Newspapers are relying increasingly on Twitter to dispense news. If it wasn’t for internet-based platforms, I wouldn’t have existed as an artist.”

Indoctrinated by his ninth-grade Islamic Studies teacher at the prestigious Aitchison College, Gauher Aftab avoided becoming jihadi fodder by the skin of his teeth. Fate had a different kind of jihad in store for him. He channelled his experience into a creation called Pasbaan — The Guardian, a comic dissuading the youth of Pakistan from the ways of Islamic extremism. According to Aftab, CFx comics, which he co-founded in 2015, is engaged in a digital jihad against hatred, vengeance and violence. While Aftab pens the storylines, Yahya Ehsan creates the artwork.

In 2015, CFx launched the first issue of its other comic, Haider, via a messenger app. “It was downloaded over 500,000 times in less than 24 hours,” recalls Aftab. “We realised that the online audience was much bigger than what could be reached through print distribution channels alone.” Thanks to social media, CFx has been covered by 200 outlets in over 40 countries. CFx then decided to develop its own app in 2015, as a local platform for comics. It has managed to build an audience of up to 5,000 readers. 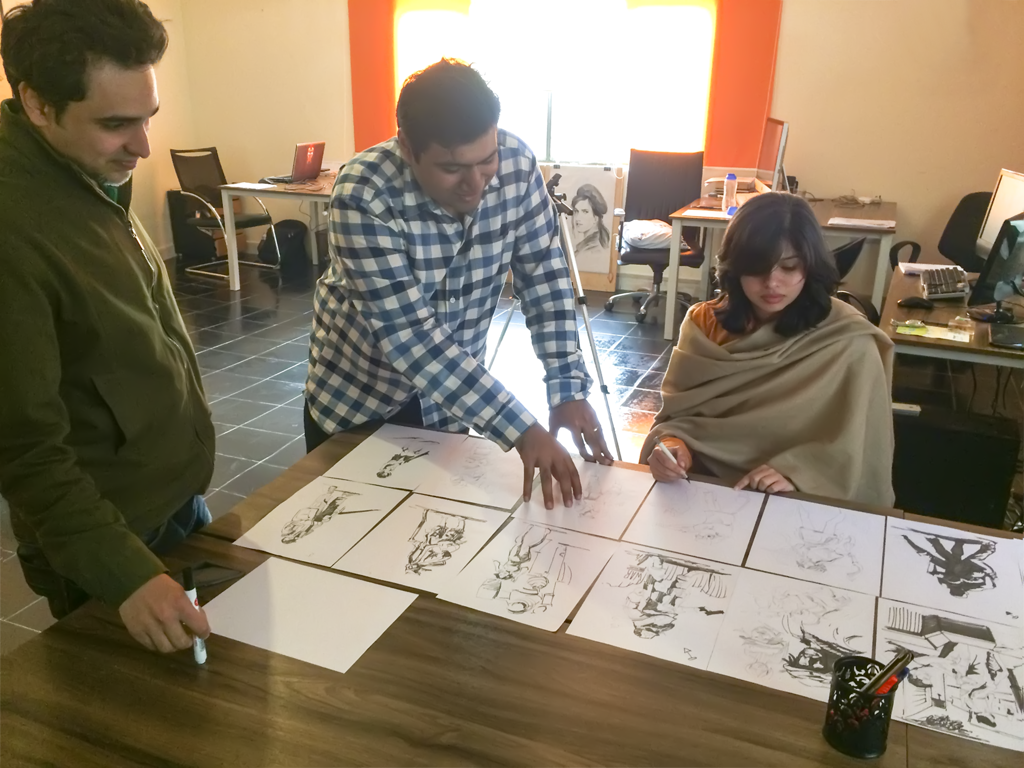 Owing to its increasing readership via its app and social media, CFx Comics is currently at the threshold of its next major step. In February 2017, it partnered with American comic book publisher Valiant Comics — an announcement CFx made official through its Twitter account, no less. CFx will be Valiant’s local distributor.

“The section of our audience that uses Android OS has grown in an especially interesting way,” explains Aftab. “As most of our readers own mid-range smart phones, we know our content’s appeal goes beyond a niche audience.” To accommodate this, the CFx Comics app has been designed especially so that it can run on low-cost smart phones. “We have an exact 50:50 split between English and Urdu readers,” he points out. One is reminded of Marshall McLuhan’s farsightedness in The Medium is the Massage (1967, Penguin), when he said, “Societies have always been shaped more by the nature of the media by which men communicate than by the content of the communication.”

The trajectory of ArtChowk, a gallery in Karachi focused on showcasing Pakistani and regional art, is particularly interesting. It started off as an online platform in 2008, and later, based on its online success, acquired a physical space in 2009. “Our use of the internet and social media is extensive and thorough,” says Shakira Masood, director of ArtChowk. “We have launched young artists fresh out of institutions and they have been well received and now have a following among buyers. We have, in our own way, contributed to the hype that Pakistani art is receiving on the international stage,” she continues.

According to Sameera Raja, founder of Canvas Gallery, social media provides visual accessibility to art. “A person who visits a gallery and takes pictures can put it up on Instagram and the viewership will multiply a hundred-fold,” she maintains, stating that viewership does not have to be physical. “If younger artists did not put up their work on social media, they would not receive a wide audience,” she continues. Raja points out that Canvas Art Gallery has over 5,000 fans on Facebook, yet not even a small percentage of these have walked into the physical gallery.