I’ve seldom felt prouder of being a Pakistani than I did during what was easily one of our finest hours as a nation. It was at Lord’s on that bright June afternoon that I almost wept with joy as Younus Khan lifted the World Twenty20 trophy with a sea of green swaying to the tune of ‘Dil Dil, Pakistan’ at the home of cricket.

It was an amazing spectacle. Thousands of Pakistani fans, young and old, men and women, boys and girls, dancing, singing, crying, hugging the people they knew and even those they didn’t.

Everybody was just ecstatic.

Such moments have been too few and far between for a people who have been subjected to routine doses of tragedy in recent years.

For a change, however, being a Pakistani was not a source of pain.

It was 17 years ago that Pakistanis erupted into similar celebration when the Greenshirts won the World Cup in Melbourne. This time, however, the title-winning triumph was much more significant because of the turmoil back home.

Pakistan had triggered the celebratory mood among their fans before the start of the grand finale, by knocking out title favourites South Africa in the semi-finals in Nottingham. It was party time around Trent Bridge that Thursday night as the quiet town of Nottingham sprang to life with thousands of Pakistani fans erupting with pure joy.

The mood carried on over the weekend and the stage was set for a memorable climax at Lord’s.

Those who were lucky to have tickets for the final were inside Lord’s hours before the start of the big match. Thousands of others were desperately searching for tickets, with some even paying up to 500 pounds for a ticket worth 90 pounds. But it was certainly worth it.

The grand finale saw non-stop celebration from start to finish. As a British journalist told me, “Lord’s has never witnessed such a spectacle.” In its long and illustrious history, the ‘home of cricket’ has witnessed cricketing history being made but never had such emotions flowed with such intensity within its confines. It might never again.

When Shahid Afridi — Pakistan’s World Cup hero — fittingly scored the winning run, the crowd went wild. Even as the stewards politely started to tell the spectators that it was time to go home, nobody was willing to leave the ground. It was an occasion not to be missed.

I, too, decided to join in the revelry. Leaving the ‘bubble’ of the space-age press box, I treaded my way into the ground and placed myself right in front of the presentation area. It was certainly one of the high points of my career as a sports journalist. I missed the moment when Imran Khan lifted the 1992 World Cup trophy at the Melbourne Cricket Ground. I was one of the unfortunate ones who covered Pakistan’s misadventure in the 2007 World Cup and, once the Greenshirts were out of the tournament, had to stay behind in Jamaica to cover Bob Woolmer’s ‘murder investigations.’

But all of that was behind me. A few yards away from me were Younus and his men, holding and admiring a well-deserved trophy most doubted they could win. Around them was a sea of roaring green, erupting with pure joy. It was a moment made in heaven!

The celebrations continued through the night on the streets of London. Edgware Road, home to a significant Pakistani population, became a sea of green, as the many Arab and Pakistani restaurants were overrun by joyous Pakistani supporters. Pakistani cabdrivers started blowing their horns in celebration and random Pakistanis were seen hugging and high-fiving each other. The festivities even made their way to Trafalgar Square. For at least one night, it seemed as if Britain had been colonised by Pakistan.

Back home, the mood was equally joyous.

Celebratory gunfire and fire crackers went off as soon as Shoaib Malik picked up the single to tie Pakistan’s score with Sri Lanka. Pakistanis knew it was finally their moment; that they were the T20 champions. And as Shahid Afridi scored the winning run, the noise became deafening — both with the crackling in the air and the cheering of the crowds that had gathered on the streets.

Every eatery with a television was packed, as were the streets where crowds gathered in front of huge  television screens to watch the match. Family and friends collected at each other’s houses to watch. 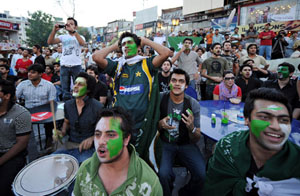 All the fervour and passion of the Pakistanis, dissipated in recent years by the lack of cricketing opportunities and the poor form of the team, returned in full force with the victory. Dhol, bhangra and dancing were the seen on the streets of Pakistan, everyone coming up with their own version of a victory dance. Some chose to express their happiness by taking their shirts off, lying down on the ground and doing a snake dance, while others resorted to a passionate bhangra. Incorporating a traditional girls’ folk dance, some in the crowds decided to hold hands and go round in circles, while others carried friends on their shoulders while they danced, or swung them holding their arms and legs.

Uncensored and live, the post-match coverage turned out to be quite sensational. A youth in Karachi screamed out: “Afridi, you rock. Marry me!” while another, who evidently saw the win as more than simply winning a cricket match, put in a curse word or two for the goras. Jubilant crowds, with much the same passion as the night before, awaited the return of their heroes at the Lahore airport. The celebrations had never really stopped, and cricket fans continued their victory dance. For once, even the police acted mildly towards the crowd.

But they met with disappointment as they soon discovered that the players had been sneaked out the back — a glimpse of their van was caught on TV leaving the airport — due to security reasons. This dampened the spirits of the crowds who had collected hours in advance to catch a glimpse of their heroes.