Despite failing to meet the economic targets during the fiscal year 2008-09, the Pakistan Peoples Party-led coalition government presented the Federal Budget 2009-10 on June 13, with the twin objectives to ‘stabilise (the economy) with a human face’ and induce ‘growth with equity.’

The human face of the budget is indicative from various schemes for the poor masses including doubling the amount of the Benazir Income Support Programme (BISP) and allocations of funds for health insurance and various reliefs to workers. The budget was presented at a  time when the country faces various challenges, including its worst-ever law and order situation, loadshedding and a high rate of inflation.

Pakistan witnessed a period of turmoil during the entire fiscal year 2008-09, particularly on the economic front when on the one hand, the terrorist incidents in major cities slowed down the economy, and on the other, the government had to approach the International Monetary Fund (IMF) for a bail-out package to face the balance of payments crisis. The power shortage and increasing prices of essential commodities not only hurt the common man, but badly affected the industrial sector too, which is considered the ‘engine of growth.’ Thus, all economic targets of the fiscal year 2008-09 remained unattainable.

The Economic Survey 2008-09, released two days before the budget, painted a dismal economic picture during the fiscal year 2008-09, when most of the major sectors showed negative or very low growth with the overall Gross Domestic Product (GDP) increasing by 2% against a target of 4.5%. The year before that, GDP growth was recorded at 4.1%.

The poor performance of the manufacturing sector, which had a negative 3.3% growth rate in 2008-09 as compared to an increase of 4.8% last year, put a major dent in economic growth. The Large Scale Manufacturing (LSM) sector posted a negative growth of 7.7% as against positive growth of 4% in the previous year, while its target for the fiscal year 2009-10 was fixed at 5.5%. It was not clear from the budget speech how the government plans to improve the performance of the manufacturing sector. The industrialists and exporters are not happy with the state of affairs.

“With increase in power charges, frequent loadshedding and breakdown of the law and order situation, how can we increase our industrial output?” asks Majyd Aziz, a leading exporter of textile products and former president of the Karachi Chamber of Commerce and Industry.

“The minister has painted a rosy picture in the budget but our exports are declining due to an increase in the cost of production at home,” he adds. He says that Pakistani products cannot compete in the European Union markets, whereas other countries have an edge over Pakistan in price because they receive incentives from their respective governments. 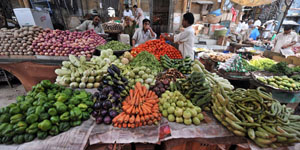 “Microeconomic crisis, trade shock, global recession and domestic security challenges were the main hurdles in the way of economic growth of the country during the current financial year,” said Shaukat Tarin, advisor to the prime minister on finance in a press conference.

It was against the backdrop of the bleak economic scenario that Khar presented the Federal Budget 2009-10 in the National Assembly amid stinging criticism from the opposition and independent economists for the government’s failure to contain inflation and the power crisis. Inflation is still hovering around 14-15% as against the highest ever figure of 25.3% in August 2008. The government expects to further bring the inflation down to single digits (9.5%).

The government envisages an economic growth of 3.3% during the new fiscal year. Increasing prices of petroleum and food products in the international market have put inflation on the higher side, particularly affecting the common man. 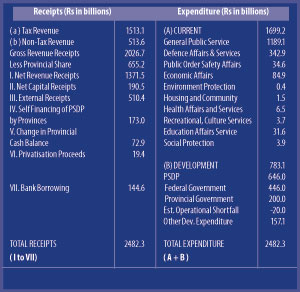 Talking to Newsline, the former finance minister of Punjab said the government removed the subsidies in December under IMF pressure, without putting institutional arrangements into place for providing any relief to the people. The government has now pledged that, after the census, it will provide relief to the poor from the BISP. Instead of using existing institutions like the Baitul Mal, or creating employment opportunities for unskilled workers, the government has virtually deferred the relief. In the budget, the amount for the BISP has been increased from Rs 34 billion to Rs 70 billion to bring five million households within the ambit of the programme.

The total outlay of Rs 2.482 trillion in the 2009-10 budget has shown an increase of 23.5% over the budget estimates of the 2008-09 budget. However, the budget also carries a fiscal deficit of Rs 722.5 billion or 4.9% of GDP. The government says it plans to meet this shortfall through external financing of Rs 264.9 billion and domestic financing of Rs 457.6 billion.

The government is relying mainly on the ‘friends of Pakistan’ for this; however, in case of any delay or refusal from the friends, the government plans to approach the IMF. Pakistan expects to receive Rs 178 billion from ‘friends of Pakistan,’ who had made this pledge at the Donors’ Conference in Tokyo. The total expenditure, (including provinces) is estimated at Rs 2,897.4 billion whereas the total revenue is estimated at Rs 2,174.9 billion.
The government claims that it has raised the development expenditure by about 54%. For example, the total outlay of the Public Sector Development Programme (PSDP) is Rs 626 billion, showing an increase of 54% as against the revised estimates of 2008-09 at Rs 419 billion. The total PSDP outlay also includes Rs 200 billion for the provincial PSDP.

But the PSDP also includes Rs 70 billion for the BISP and Rs 25 billion for the Earthquake Reconstruction and Rehabilitation Authority (ERRA) to meet expenditures for the rehabilitation of the IDPs. The PSDP is supposed to be a programme through which employment opportunities are created by developing various physical infrastructure projects.

“Technically, it is wrong to include the BISP in the development budget,” says Dr Shahid Hasan Siddiqui, a senior economist. 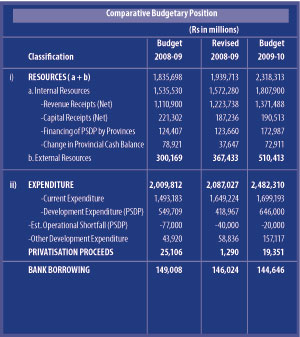 The government had allocated an amount of Rs 550 billion for the PSDP in the 2008-09 budget, with the federal government’s share being Rs 337 billion, but because of the economic constraints, it had to reduce the federal PSDP to Rs 219 billion.

The government plans to initiate two major hydropower projects, Khan Khwar and Jinnah Hydro, with a total capacity of 168 megawatts. Moreover, it has planned to construct more than 30 small- and medium-sized dams in different provinces. An allocation of Rs 4,000 million has been made for the 4,500 megawatts Diamer Basha Dam Project.

The worsening law and order situation in the country has posed a great threat to the economy of the country. “I don’t understand how the government can implement its development projects in the NWFP and Balochistan, where army operations are going on,” remarks Shahid Kardar. Additionally, he says many development projects, which should have been undertaken by the respective provincial or local governments, have been initiated by the federal government.