Kaleem Omar (1937-2009), who died suddenly on June 25, had been battling heart disease for some time. He was one of Pakistan’s most distinguished journalists and English-language poets, a man with an enviable command and facility with words. He could write on a range of subjects, from politics and sports to literature and films, with equal ease, and he brought to his work a passion combined with a fine eye for detail. In the drawing room, he was never a man to be ignored: he was always full of all the latest news and he had strong opinions (and a newspaperman’s inside knowledge) of current events.

I would often run into him at the home of Akbar Liaquat Ali Khan, where my husband, Saleem, and others gathered to watch cricket or tennis. Kaleem would arrive, large as life, with a slight shuffle to his walk, almost always dressed in a shalwar kameez and a black waistcoat with a book or two — or three — tucked under his arm. But because he and I shared an interest in literature, our conversations would invariably veer to T.S. Eliot, Ezra Pound, W.H. Auden or other poets that he admired. He would quote their poetry and provide endless information on their lives, their quips, quirks and repartee. He also shared with me a propensity for useless information — a trait we considered essential to any journalist. The difference was that, unlike me, he was an absolute fount of knowledge on the subject.

I have no clear recollection of when and where I first met Kaleem, but he was certainly a part of our social circuit in the mid-1960s. I have this memory of a slim young Kaleem Omar, with a trendy mop top haircut, sitting at this long, candlelit table with us at Agha’s Tavern, a fashionable restaurant in Karachi. In those days, he lived in Lahore, and I was told that he had a wonderful library. I had the impression that he was a gentleman-at-large, but it transpired that he was rather a serious poet.

Kaleem always proudly spoke of Taufiq Rafat as his great mentor, guide and guru. His anecdotes about Rafat were the stuff of legend: it was Rafat who helped Kaleem find his own voice as a poet — until then, Kaleem had just ‘blundered along,’ as he once told me. The duo of Taufiq Rafat and Kaleem Omar in Lahore, and their contribution in creating English-language poetry that was contemporary, new and of a high quality during the late 1960’s and 1970’s, is now legendary. The informal poetry readings, discussions and creative writing workshops that Kaleem and Rafat held at home inspired a new generation of poets such as Athar Tahir and Shuja Nawaz.

In recent years, much attention has been given to writers of Pakistani English fiction, but Pakistani English poetry of a really high standard was being written some 30 or 40 years ago, and had never received its due cognisance: Kaleem Omar was pivotal to that process of recognisation. In 1971, his work appeared alongside that of Rafat, Salman Kureishi, Zulfikar Ghose and others in Pieces of Eight, edited by Yunus Said, the second of the two earliest anthologies of Pakistani English poetry, which were a milestone in the history of the genre. Shortly before this, Taufiq Rafat had been editing a special poetry issue of  the Pakistan Quarterly when the writing of Maki Kureishi drew his attention. In 1970, Taufiq and Kaleem met with her in Karachi, and invited her to participate in a multimedia poetry event with visiting American poets at the American Center in Lahore. Many other English-language poetry events followed.

In 1975, Kaleem edited the excellent Wordfall: Three Pakistani Poets: Taufiq Rafat, Maki Kureishi, Kaleem Omar. Wordfall remains one of the finest English-language poetry anthologies to have been published in Pakistan to date. “Kaleem can write a poem while sitting in a restaurant,” the late Maki Kureishi once remarked (or words to that effect). Kaleem, who had spent many years in then East Pakistan, where his family owned the prosperous firm Omar Sons, wrote, in Wordfall, a satirical poem criticising the military action of 1971 and the ostrich-like response of West Pakistan in ‘It Didn’t Really Happen’; while the elegant ‘Trout’ begins with the words:

By first light we are at the river’s edge,
unsnarling tackle. Hands with a new day’s life in them,
choose favourite spoons and pocket sweets
for the thirst that will come to them. Spacing out
along the boulder strewn bank,
we agree to meet for lunch sharp at noon 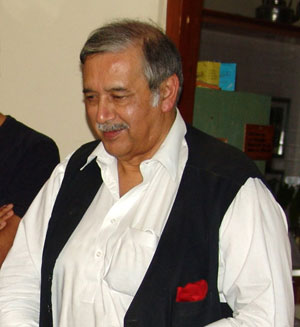 The vitality of the poem, and its celebration of life, provides a strong contrast with other samples, such as ‘Poem for My Father’ about the untimely death of his father (when Kaleem was in his late teens) and the imperfect lives of those he had loved and who survived him. Kaleem’s later work continued to be widely anthologised, including the accomplished ‘Hunters in the Snow’ which describes and draws metaphors from a painting by Pieter Breugel.

Kaleem Omar belonged to a well-known family with a strong literary tradition. His first cousins include the writers Irfan Husain, Ahmed Rashid and Zeenat Ziad. To me, Kaleem is part of a life that once included Ahmed’s older brother, the late Unver Isa, who wrote clever (unpublished) comic ditties and with whom Kaleem shared an irreverent sense of humour. “I say, KO, old chap,” Unver would say, and then the two of them would sit there with heads bent together and share some hilarious (and useless) information. Unver’s eyes would dance and he would chortle. Kaleem would dissolve into raucous laughter.

Born in Lucknow and educated in the colonial system at Sherwood, in Nainital and at Burn Hall in Abbotabad, Kaleem graduated from London University. I believe that, even in those days, all he ever wanted to do was write; he did not have any overwhelming interest in running a business or taking up engineering, as was expected of him. The family firm, Omar Sons, where he did work for a while, suffered great reversals of fortune, particularly after the loss of East Pakistan.

Kaleem and I started writing for newspapers more or less at the same time. I became a freelance contributor and feature writer for Dawn Magazine in 1982; he joined the staff of The Star, where he often wrote a poem or two as part of his immensely popular weekly columns. He went on to become investigations editor at The News, where his articles and columns continued to address a host of issues and be widely read.

For years, he kept saying he was planning to put together a collection of his poems, which he never did to the best of my knowledge. But he did continue to write poetry, some of which appeared in The News, such as ‘The Troubador’s Life’:

Such twists and turns of destiny
Such reckonings have I known,
A look here, a moment there,
Absences in autumnal air,
A memory of gilded wings,
Flitting through a secret glade
The feel of snow upon the face
A kingfisher swooping down,
Like iridescence upon a stream
Places to lie back and dream.