The idea of microfinance for the very poor was instilled by Muhammad Yunus of Bangladesh under the banner of Grameen, through which he sincerely hoped to help the disadvantaged people help themselves. Life for many of the Grameen borrowers and their families changed dramatically and women’s empowerment was a direct outcome of this initiative.

Based in Pakistan, Kashf Foundation (a replica of Grameen) is another success story. Though not yet as successful as Grameen, it has had a promising start. In Replicating Dreams, author Nabiha Syed examines the Grameen model and the working model of Kashf, detailing the operating styles of both and also how each has tailored its policies to suit their own specific settings. The book gives an in-depth analysis of both the institutions and assesses their shortcomings as well as their successes.

Replicating Dreams begins on a very promising note by mapping the contours and elements of what constitutes the famed Grameen Solidarity Group Lending Model and its adaptation by Pakistan’s Kashf Foundation. Following the Grameen model, Kashf requires five women to form a peer group in order to obtain a loan. These groups are entirely self-selected, as in the Grameen system, and all five women must live in close proximity to one another and must not be blood relations.
In a notable deviation from the Grameen example, all Kashf borrowers must be married. “The rationale is that unmarried women are prone to moving out of a geographical location after marriage, and moving implicitly indicates loan default.” But, as the author notes, the exclusion of unmarried women means denial of opportunity for single women to build up enough capital and acquire self-sufficiency that could give them a certain amount of economic bargaining power while entering into a marriage contract.

Further, given the conditions within which a majority of the women in Pakistan have to work, Kashf specifically permits women to obtain loans on behalf of their husbands. “This approach was designed to overcome possible objections to the economic activities and advancement of potential participants.” A little later, the author explicates this point in a different way: “… a chauvinistic society will not tolerate a programme promoting financial independence of women on any other terms but its own.”

Kashf claims that in allowing women to borrow on behalf of men, the entire family unit is enabled to get strengthened because the process entails joint family decision-making. Moreover — and this is a striking observation — microcredit programmes require significant time commitments on a weekly basis and those, in turn, impinge on the time that can be accorded to household labour. If the ‘double-bottom’ line of microcredit, namely women’s empowerment and financial advancement, is to be ensured, then, according to Kashf, men need to be included in the process to allay apprehensions of female takeover of hitherto male-dominated space. 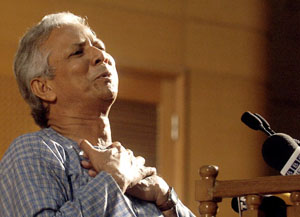 Syed has also studied the differential performance of the programme in Bangladesh and Pakistan, bringing forth the fact that institutional differences account for much of the disparity in success levels. For example, the areas in which Kashf operates are still heavily under feudal control, which does not accept individual entrepreneurship or financial independence for the poor. “The entry of an institution which encourages individual economic growth, self-empowerment and self-employment and, at the same time, denies landlords income derived from informal credit offerings, would obviously not be welcomed by the feudals,” writes Syed. This is so true about the feudal mentality and cannot be ignored by any microcredit lending institution operating in Pakistan.On the other hand, this is not even remotely perceived as a threat to its system of organised subordination and hierarchy in Bangladesh.

The importance given to social reform by Kashf in gender training and discussion of reproductive health and education is a high point of this organisation, whereas Grameen is lauded for its efforts towards instilling discipline as a way of life in its borrowers. Differences between the Grameen and Kashf models have also been identified in their styles of organisation, product diversity, differential interest rates, and approach to and scope for gender training and savings programmes. This makes for a very interesting reading. However, the critical question of how far the adaptation of the Grameen model to Pakistan’s environment has enabled the actualisation of the ‘double-bottom’ line of microcredit, namely financial and social empowerment, is not discussed in detail. This is something that the reader would have liked to know about.

The last three chapters take on a lecturing tone and steer away from the crucial point, to the point of confusing the whole argument. Dwelling more on the theme of women’s empowerment, they help little towards enhancing one’s understanding of the comparative study of both the organisations. This seems to have no logical relevance to the earlier part of the book. Similarly, the discussions on ‘Trust’ and ‘Marketing’ hang in the air, with no attempt to root them to the general context of the book.

However, “With 10 million adults, considered eligible for microfinance services, Pakistan is one of the largest microfinance markets in the world” and the issue that Syed has raised is extremely pertinent and must be researched further to explore new vistas for development and women’s empowerment in Pakistan.