In a recent interview with a private TV channel, former president Pervez Musharraf proudly claimed that the abolishment of the Levies Force and bringing Balochistan under the administrative control of the police was one of the main achievements of his government.

The Levies Force was a system of police that comprised local people assisting the tribal chiefs for maintaining peace in their respective areas. This was introduced in Balochistan more than a century ago by the British under their policy of indirect rule in the area. After Partition, not only was this force maintained, but an increase in its strength was also witnessed with the passage of time.
After the enforcement of the Police Order 2002, in a meeting chaired by then president Pervez Musharraf and the prime minister in 2003, it was decided that the Levies Force and the police would be assimilated. For this purpose, Rs 5.5 billion was spent by the federal government to train and equip the new police force.

The main objective behind this was to improve the law and order situation in the province. But instead of seeing any improvement, the law and order only worsened, to the extent that, today, it cannot be controlled without the assistance of the Frontier Corps.

Sources in the home department of Balochistan reveal, on condition of anonymity, that the establishment in Islamabad was not happy with the Levies Force. It was disbanded because they considered the Levies Force to be a tool that was beneficial to the tribal chiefs, who used it to assert their control over the region.

Amirul Mulk Mengal, who remained the governor of the province three years after Musharraf took over, opposed the decision and took steps to organise the century-old Levies Force along modern lines and created a separate investigation wing for it. However, despite massive restructuring, constant pressure from Islamabad for the merger of the force with the police continued. Not only did the provincial assembly pass a resolution against the merger, but all the political parties opposed the federal government’s decision, and viewed it as an attempt to strengthen the hold of the centre in Balochistan through the police.

When the new provincial government was formed under the leadership of Nawab Muhammad Aslam Khan Raisani, it decided to reverse all decisions and policies undertaken by the previous administration, including the restoration of the commissionerate system in all former administrative divisions of the province, including Quetta, Kalat, Mekran, Sibi, Naseerabad and Zhob.

After a unanimous resolution was passed by the Balochistan Assembly regarding restoration of the Levies, the provincial cabinet decided to restore the force in March this year. Sources in the home department say that the Levies Force will be restored to its prior position in four phases. In the first phase, the Levies Force has been restored in six districts including Sherani, Washuak, Musa Khel, Jhal Magsi, Pishin and Chaghi. A committee was also constituted to monitor the restoration of the force, besides taking steps to hand over assets such as buildings, vehicles and weapons to the Levies. 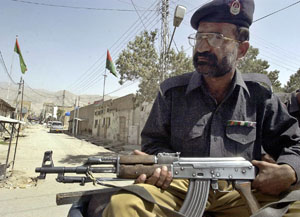 Following the restoration of the Levies Force, the Balochistan cabinet also recommended that the federal government restore the magistracy system in the province.

The situation in Balochistan is critical and some political observers are of the view that reversal of decisions of Pervez Musharraf would help to improve the situation but they suggest that other major steps need to be taken, including a halt to military operations, the recovery of missing persons and the rehabilitation of the IDPs of Dera Bugti and Kohlu as confidence-building measures to facilitate negotiations with the nationalist forces in Balochistan.