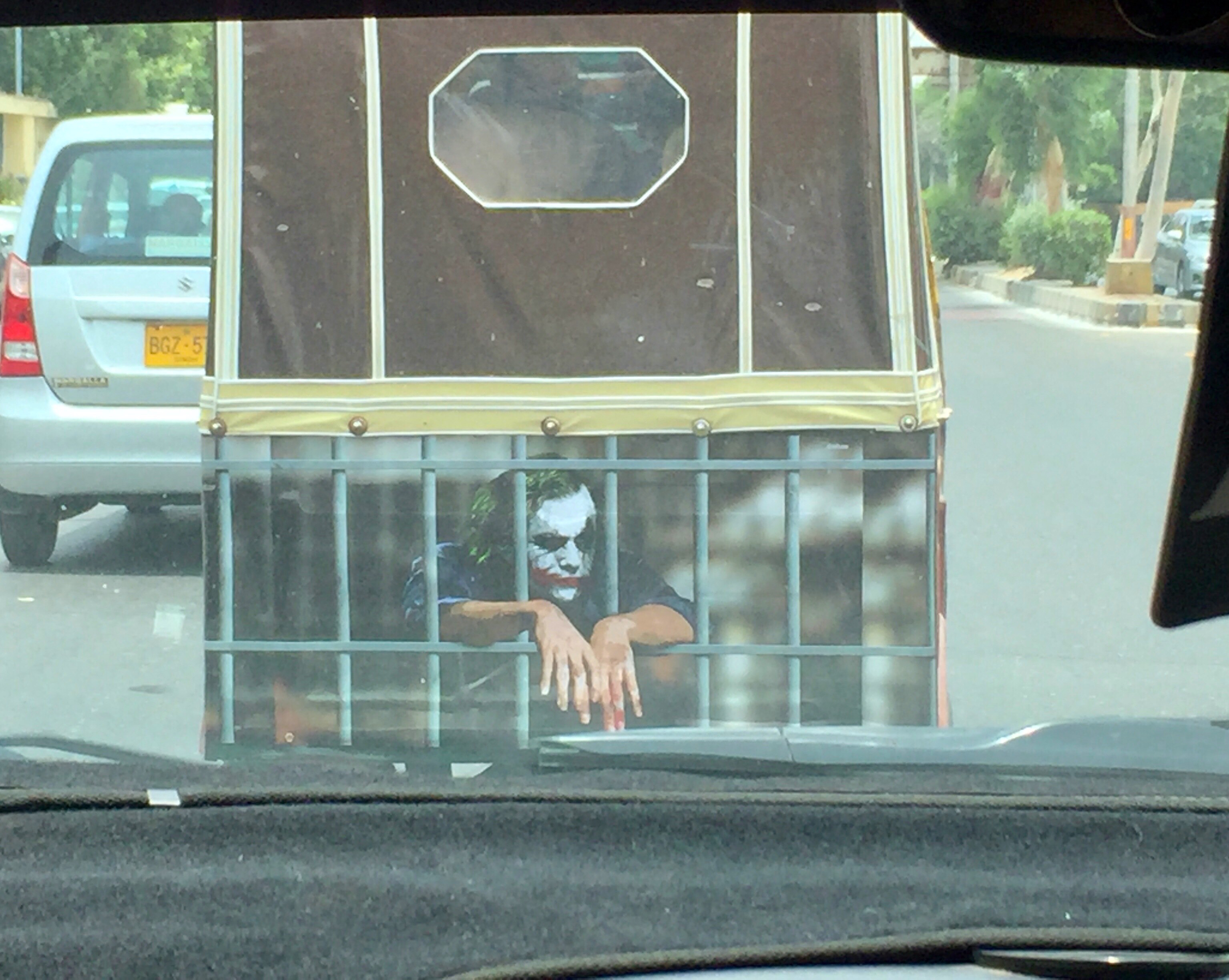 A rickshaw on Karachi’s Dr Ziauddin Road. (Photo by the writer).

As I drive on the streets of Karachi, I follow only one rule. To infringe on the rights of others before they infringe on mine. Safety and the law are an afterthought. They are as distant as the chance of me stopping at an intersection. There is an unspoken code that governs road etiquette in Karachi. Its seeds were planted in the collective consciousness of the city in the previous decade.

“Driving a vehicle is associated with the need for power,” says Dr Farah Iqbal, Chairperson of the Department of Psychology at Karachi University. “The wheel is in our hands and we can do whatever we want. Society is fascinated by film heroes who are powerful and who drive recklessly, and so we think we are being bold and courageous by taking risks on the road,” she adds.

I morph into something else behind the wheel. To drive in Karachi, is to dance with demons. Mine is a city that glorifies violence – cars circle sculptures of swords at roundabouts like a holy site. Here, all roads lead to anger.

Like Uber and Careem drivers, I overtake every vehicle in my path. The thought of slowing down behind it, or staying in one lane, is unbearable. There is no room for patience on these congested streets. “The problem exists almost everywhere and is not limited to our culture,” says Dr Iqbal, adding, “it has to do with cognition, feelings and behaviour.”

But things were not always like this. There was a time when the city had enough space for you to dream while driving.

I have been driving in Karachi for almost two decades. By the mid-2000s, Sunday evenings became synonymous with a traffic-driven hysteria previously unprecedented in the port city.

There was, in the mid-noughties, a visible increase in the number of vehicles on the roads. “Car financing schemes began in 2003,” DIG Traffic, Javed Mahar tells me. “And due to the lack of an adequate system of public transport in Karachi, people were – and still are – forced to buy vehicles,” he adds. But this was only a “small glitch” in the wider scheme of things, according to Naeem Sadiq, who has done research on vehicular issues and vehicle-related reforms. “The rise in the number of vehicles has been consistent over the last two decades at least,” he says, adding, “it will continue as long as the government does not provide public transport.”

By 2008, I saw the substandard roads in District South deteriorate further – a result of the increased traffic load. Up until then, driving in Karachi could be described as a relatively pleasant experience. Thereafter, it has increasingly been identified with a sense of resentment and aggression. “Roads such as Bunder Road and I. I. Chundrigar Road have remained the same for the last 40 years,” says DSP Traffic, Arshad Siddiqui.

I have noticed that road rage in Karachi is directed mostly at young men. Inspector Muhammad Idrees tells me that young male drivers have brought it upon themselves; that it is mostly they who are involved in traffic violations. “Most of the fatalities in road accidents involve 16 to 22-year-olds, sometimes even 14-year-olds” he says, adding that taking short-cuts has become the “fashion” and “trend.”

Women drivers, according to Dr Iqbal, are viewed as “a lesser threat” and as having a “lower level of expertise.” For this reason, and the fact that they are more cooperative, attitudes towards them are less severe and “a little leeway is given to them,” she explains.

My ire is almost always directed at people in smaller, less impressive cars, all the way down to rickshaw drivers, motorcyclists and pedestrians. I find it easier to hurl obscenities at them than to confront an SUV. I look for easy prey.

Dr Qudsia Tariq, a clinical psychologist and professor at Karachi University, describes this as “psychological displacement” – the practice of venting one’s frustration on an easy target. The anger one feels, according to her, is proportionate to one’s sense of urgency, or haste, at that particular time. The higher the sense of urgency, the more the anger.

But my right of way is usurped even when I am driving slowly – in fact more so when I am driving slowly – therefore making me angry. In Karachi, it is not enough to drive safely and follow traffic laws. You have to make a conscious effort to protect yourself from the bad driving of others. It is a different concept altogether. Perhaps this is why some Karachiites erroneously believe that they have no option but to drive aggressively in order to make space for themselves on the road.

The anonymity that comes with living in a mega-city, along with the security of being inside a vehicle, gives one the freedom to behave as one likes, according to Dr Tariq. She says that most cars are driven by chauffeurs, and people tend to direct their anger towards them.

In a city where sidewalks and pedestrian crossings are scarce and where death lurks around every corner, crossing the road is no walk in the park. While crossing, the pedestrian will look at you as if it is you who are in the wrong. He will then make it a point to cross slowly and move his arms pronouncedly, in an attempt to appear confident and at ease.

“When a driver violates traffic laws and goes the wrong way, he will look arrogantly at you, demanding that you give him space,” says Dr Tariq. “Usually, it is older drivers who are clumsier and more arrogant,” she adds. “They act as if they know better.” She says a large number of bus and school-van drivers are gutka (chewing tobacco) and naswar (smokeless dipping tobacco) addicts – a habit that increases aggression.

Prior to the late-2000s, I used to draw parallels between Karachi and Los Angeles while driving. Now, I draw parallels with Blade Runner 2049. Sometimes it feels like being inside a videogame – you constantly encounter obstacles and challenges in your path.

I tried to give up driving, by switching to Uber and Careem, but being a passenger in a badly driven vehicle did not make life easier. The captains would smile and say that I was the only customer they had come across who wanted them to drive slowly (most passengers would ask them to drive faster). Being driven at high speeds in these taxis, I often reminisce about the sign I saw as a child on the Super Highway: “Better late than never.” It got trampled over by the expanding city.