It was a tame affair when the National Assembly last month formalised Shaukat Aziz’s ascent to the office of prime minister. The so-called smooth transition of power to his handpicked man, was hailed by President Musharraf as “a sign of an increasingly mature democracy.” Public perception, however, viewed the entire process as a farce designed to further strengthen the military’s political hold.

Aziz’s victory in the bye-elections amidst widespread allegations of rigging could hardly be described as an appropriate beginning of a new rule. A report from the independent Human Rights Commission of Pakistan, said that Aziz’s polling agents in Tharparkar, one of the two constituencies from where he returned, stamped ballot papers in full view of the public. Similar complaints have been reported from Attock. There have also been reports of pre-poll manipulations. These incidents unmistakably exposed Musharraf’s claim of “a new political culture” as a blatantly orchestrated move.

The prime-ministership may be a dream come true for the suave former Citibank executive, but the course ahead is fraught with pit-falls. The government-paid newspaper supplements projecting Aziz as “a great leader” and his election as the “beginning of a new era”, cannot camouflage the reality of Pakistani politics. A technocrat non-politician prime minister will find it far more difficult to meet political challenges compared to many of his predecessors. Most political analysts doubt that the former banker, who has spent 32 years of his professional career abroad and has no political base of his own, can deliver or survive in Pakistan’s highly polarised and complex political environment.

Aziz is saddled with the stigma of being a pre-picked winner in a rigged poll. He is a prime minister without a political base, from outside the political system and is entirely beholden to Musharraf for his political survival. It is quite apparent that the installation of a new prime minister will not change the power equation that is heavily tilted in the military’s favour. Aziz may have more independence in running the government and the economy, but on crucial foreign and domestic policy issues, General Musharraf will continue to call the shots. Wholly indebted to Musharraf for his political fortunes, Aziz will be unable to challenge the President on any issue. “There will be much dissatisfaction among members of the treasury benches, while the army will continue to call the shots on all important issues under cover of a democratic faÃ§ade,” says Mohammed Waseem, a professor at the Quaid-i-Azam University.

A major problem for the new Prime Minister is to maintain the unity of a highly diverse coalition, which has no clear programme or direction except for their loyalty to the military. Shaukat Aziz, meanwhile, who was elected to the National Assembly on a borrowed seat, with no personal support base in the PML(Q), will have to completely rely on the party president, Chaudhry Shujaat Hussain, and his cousin and Punjab chief minister, Pervez Elahi. Similarly, other coalition parties like, MQM and PPP (Patriots) will also be looking to the President for guidance.

Adding to his woes is the uneasy relationship between Aziz and many senior cabinet ministers who are clearly unhappy with Musharraf’s prime ministerial choice. “They have accepted him grudgingly, but he will be a disaster,” says one cabinet minister. Some of these disgruntled elements predict yet another change in the government — sooner rather than later. This internal bickering and misgiving is bound to affect Aziz’s ability to provide good governance. There has not been any significant change in the cabinet except for the induction of some new faces. Some portfolios have been reshuffled, but traditional power-blocks continue to dominate the cabinet, while ministers facing charges of corruption have still retained their posts. Hardly an auspicious sign for good governance.

Lack of a public profile is yet another drawback for the technocrat Prime Minister. Aziz does not have the charisma or popular base to mobilise public support for any actions taken by the military-led government. His recent attempts to interact with the public have been further curtailed after the failed assassination attempt during the election campaign. Shaken by the incident he did not go to his constituencies. Aziz now lives under such high security, that his interaction, even with members of parliament, is severely limited. 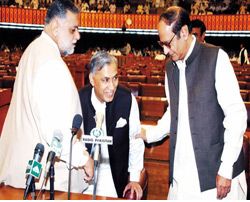 Deteriorating law and order and strained inter-provincial relations are the most immediate problems that the new Prime Minister will have to tackle. Despite the government’s crackdown on Al-Qaeda and its local allies, terrorism continues to grip the country. There has been a steep rise in sectarian violence in Karachi, as well as other parts of the country. The situation in Balochistan is particularly volatile, with the Baloch nationalists up in arms against the federal government on the issues of the Gwadar port and the establishment of new cantonments in the province.

Baloch leaders accuse the government of trying to red-Indianise the local population and using brute force to crush the opposition. In the most serious resistance since the armed uprising in the 1970s, Baloch insurgents have killed several army and paramilitary soldiers in guerrilla attacks. It is very clear that the issue can only be solved through political negotiations, rather than military might. Aziz, with no political experience or skill, will clearly be out of his depth in this extremely dangerous situation. Similarly, the unresolved issue of the division of financial resources among the provinces will also seriously challenge Aziz’s political ability.

The economy will remain the key issue with the new government. Aziz has kept the finance portfolio to himself, so he will have to directly deal with the volatile issues of poverty and unemployment. As finance minister, he is widely credited with turning the country’s economy around from the verge of bankruptcy just a few years ago. From near insolvency he has managed to steer the economy to a more than 6 per cent growth this year. However, Aziz had a little help from the post 9/11 scenario in the form of massive foreign exchange remittances from Pakistani expatriates which boosted both the stock market and real estate. Pakistan is seeing the emergence of a new middle class, fueled by remittances and rising domestic incomes. That has drastically changed spending patterns, spurring demands for motorcycles, cars, and other consumer goods. Consumer credit too has played a major part. Buy today and pay tomorrow. That psyche did not exist in Pakistan before; now with lower interest rates and the perception that the situation has improved, people are buying. But there is a downside. Despite an improvement on the financial front, Pakistan is plagued with problems of rising poverty and unemployment. Around one third of the population still lives below the poverty line. The highest incidence of poverty is in the rural areas which comprises 60 per cent of the population. According to a World Bank report, one third of Pakistan’s population lives in poverty with two thirds in the rural areas. ” Their poverty is both deeper and more severe than urban poverty,” says the report.

The government’s persistent reluctance to initiate land reforms has further increased the inequality. More than half of the rural population is landless with the highest incidence of poverty. The government claims that it has arrested poverty levels, but concedes that it has to be brought down further. The other challenge is to contain population growth, which is directly linked to poverty and job availability.

Analysts contend that the higher economic growth rate achieved by Pakistan has not produced corresponding social improvement. The country’s social indicators are well below those of other developing countries with similar per capita incomes and have improved slower than those of countries with similar growth rates. The social gap, therefore, remains a critical long-term constraint on sustainable development.

Poverty is much more pronounced in western Balochistan and those parts of rural Sindh in the tribal and feudal grip, which have remained untouched by the prosperity witnessed in the big cities. The situation is not much better even in certain parts of the country’s most prosperous province — Punjab. Growing rural unemployment, particularly among the educated classes, has resulted in rising crime and increasing incidents of suicide. Just 150 kilometers from Islamabad in Utta Klan village in Mianwali district, at least 23 people have reportedly committed suicide because of poverty and unemployment. Most of them were young educated men who could not find employment. A major factor in the slow growth of employment generation is attributed to the lack of improvement in both domestic and foreign investment. “The main concern facing investors is the heightened risk of destabilising factors entering the political arena,” says Mudassir Malik, a leading economic analyst.

Despite elections in October 2002 and the installation of an elected government, political stability has remained elusive. The stand-off between the powerful opposition and President Musharraf over the military’s political role and other key constitutional issues have fueled political instability.

Reports of Al-Qaeda’s presence in Pakistan, coupled with increasing incidents of terrorism, are major constraints for economic development. “When investors, especially westerners, are afraid to even visit Pakistan, why should they put money here,” says an economic analyst. A major concern stems from the recent upsurge in religious violence, which is likely to hurt foreign investment and hinder the government’s ability to continue economic reforms and sustain growth. The perception of Pakistan as being a troubled country has remained a constraining factor.

Pakistan’s massive defense budget leaves little money for the government to spend on the development of crucial physical and human infrastructure. Despite an improvement in relations with India, Pakistan has increased its defense budget this year by 7 per cent. More than 21 per cent of the budget goes directly to defense, while many development works also cater to defense requirements. Some analysts contend that Pakistan’s growing defense expenditure is untenable and will prevent any sustained economic growth.

It is a tall order for a former international banker turned politician to challenge the military establishment, which also happens to be his patron. But some analysts contend that any prime minister, no matter how pliant, begins to flex his political muscle when he is the actual leader of the house. Then he becomes a thorn in the side of the powerful military establishment. It remains to be seen how Shaukat Aziz will go down in history. Most political analysts agree that a leadership change can be positive if it is backed by a solid institutional base. In the current scenario that has still to be created.

Will the Musharraf-Aziz team succeed when so many similar attempts in Pakistan’s troubled political history have failed?