“I’m not smart enough for premeditated artifice as yet”

Imad Rahman was born and brought up in Karachi and educated at the Karachi Grammar School. He went to the United States for higher studies, has an M.A. from Ohio University, and an MFA from the University of Florida. He was the 2001-2002 James C. McCreight Fiction Fellow at the Wisconsin Institute for Creative Writing, a subject he taught at the University of Wisconsin-Madison for several years and now teaches at Kansas State University. His first book, I Dream Of Microwaves, a collection of interlinked short stories narrated by a Pakistani-American actor, published in April, has received considerable critical acclaim in the American press and is now being translated into French. In this e-mail interview, Imad Rahman answers a few questions about literature and writing. 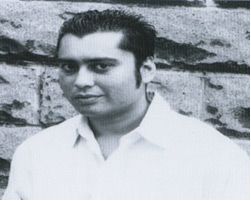 Q: You grew up in Karachi and were educated at the Karachi Grammar School. Did you have an interest in literature at the time?

A: I’ve always been a reader, but I didn’t really read anything at school that overwhelmed me in any significant way, so I started reading books I probably wasn’t supposed to. The first two books that knocked some barrier open for me were Salinger’s Catcher In The Rye and Heller’s Catch 22. I was about sixteen then, I think.

Q: When you were in college in America, did you have a career in mind? When and why did you decide to become a writer?

A: I didn’t know what I wanted to do, but I knew what I didn’t want to do or who I didn’t want to be. A liberal arts education allowed me to float around from one field to another until I found one that I felt I could commit to. At that point I didn’t know that I loved reading and that I was interested enough in writing to want to learn more about the craft. I don’t think I ever decided to become a writer. I just kept writing until I reached a point where I realised that writing fiction was the one thing I did better than anything else, and that it was the one thing I liked doing better than anything else. I’ve been fortunate to have the most generous-yet-rigorous mentors possible. But writing is such a lonely and painstaking process, and ultimately I don’t think I would have kept plugging away at it unless I felt somewhere in the back of my mind that I had what it took to make it. And being in a community of writers was incredible too — I don’t think you can ever underestimate that.

Q: What is it that makes you write?

A: That’s a good question. I think we write about the world as we see it, so if there’s anything that makes me write — apart from the obvious schizophrenic voices in my head demanding to have their stories told -it’s a desire to make sense of the world as I perceive it by getting it all down on the page.

Q: During a college holiday in Karachi, you took part in amateur theatrics. Have you been much involved in theatre before or since?

A: My acting ability has always been somewhat limited, in an over-the-top sort of way. Luckily for me, and for the rest of the world, I can limit my role-playing to the computer desk in my office now. I haven’t been involved too much in theatre since then, unfortunately, but I’m always open to the possibility of chancing my hand at playwriting sometime soon.

Q: How did the character of your narrator, Kareem Abdul Jabbar, a Pakistani American actor, evolve?

A: I think KAJ, the character, has been lingering in my subconscious for the last fifteen years or so. I’m not sure where he came from, or what made me finally tune in to him, but I’m glad I did. I’ve always been fascinated by method acting, by the ability of certain actors to cast off one persona and completely inhabit another, and I’ve always wondered about what would happen when the lines started blurring and you forgot where the part left off and where you began. I think Donald Barthelme once said he wrote so many stories about architects because he didn’t want to write about writing. I often think of acting as a close cousin to writing, and since I didn’t want to write about writers either, acting seemed like the next best thing.

Q: Did you start off with the notion that I Dream of Microwaves would be a series of interlinked short stories?

A: I started the book with the first line. Everything else, as they say, obtained. I usually don’t have much of a game plan as I write, but I do have several disjointed and non-sequiturish sentences, images, characters, etc., that I want to somehow connect within a single narrative. And at the heart of it all, I think that’s what writing is to me: making unlikely things connect.

Q: The book was a wonderful satire of America and Pakistani Americans and much else. Do you find satire a particularly effective way of making a comment, or did the comedy just come naturally?

A: To be perfectly honest, I’ve always thought of the book as being more tragic than comic, but I think I’m in the minority there. The sort of work that I like to read generally blurs the lines between literary genres, and I hope I did some blurring of my own here. And it’s all au naturelle anyway. I’m not smart enough for premeditated artifice as yet.

Q: What is your next project?

A: I’ve told myself I’m writing a novel and I wouldn’t want to disappoint myself by saying otherwise.

Q: Which writers do you admire the most?

A: Anyone who knows me knows about my unholy love for the fiction of Barry Hannah. I read a lot and I admire anyone who can slave away in a locked room long enough to produce a book. But if forced, at gunpoint, to pick, I’d probably choose George Saunders, Denis Johnson, Mary Gaitskill, Lorrie Moore, Barry Hannah (of course), Flannery O’Connor, Mark Richard, Padgett Powell, Mary Robinson, Walker Percy, Harry Crews, John Fowles, Amy Hempel and T.C. Boyle and be able to respect myself in the morning.

Q: Where do you think American fiction is headed?

A: I’m not sure where American fiction is headed, but it’s probably as diverse now, structurally and stylistically, as it’s been in a while. I think as long as new voices keep pushing through and familiar voices keep finding different ways to be heard, we’ll be heading in the right direction.

Q: What space does it offer the S.Asian/Pakistani-American writer?

A:I think that there’s space for anyone who writes a good book and has the persistence to stick with it till someone picks it up.

Q: Do you get many students of South Asian or Pakistani origin in your creative writing classes?

A: I haven’t had a single South Asian student in any class that I’ve taught, but hopefully that’ll change somewhere down the line.