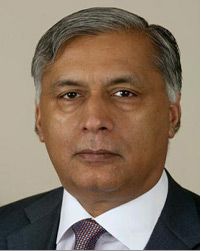 Islamabad: “No. Not the prime minister. I am Chaudhry Shujaat Hussain.” This is how the self-effacing, but hugely powerful head of the Pakistan Muslim League, responded to calls greeting him upon assuming the office of Prime Minister of Pakistan. This was not just an honest admission of the fact that his glory was built to last a mere 45 days — now over — and to pave the way for his successor — Shaukat Aziz — now in the saddle. This was also a way of saying that he is more important as Chaudhry Shujaat Hussain than as Prime Minister of Pakistan — an office with a grandiose title, but little power.

Shaukat Aziz’s initiation as Pakistan’s new Prime Minister will not change this fundamental fact of political life. Contrary to naive presumptions being made by some in the Pakistan People’s Party Parliamentarians, that he will soon overshadow President General Pervez Musharraf, Shaukat Aziz’s task is clearly defined. “He is to focus on the strategies to facilitate an economic take- off, improve the structures of good governance, do smart packaging (read PR) of the country’s image,” says a high-ranking military official closely tied to Musharraf’s political game-plan.

In this list of ‘dos,’ is actually hidden the statement on ‘don’ts’ for Shaukat Aziz. He has to stay clear of political wheeling and dealing, not have over-arching ambitions to be the sole spokesman for Pakistan, mind his relations with the Americans and not get too chummy with them, and not deviate from the script handed to him from the presidency on major policy initiatives.

What is more, he has to co-ordinate every move with the presidency and go slow on solo initiatives. “I think Shaukat Aziz understands very well what his limitations are and the fact that he has made it to the top slot means that he has no problem with the limited mandate given to him,” says a member of the central Executive Committee of the Pakistan Muslim League. He also went on to say that under the new arrangement, the Chaudhries, in close coordination with the presidency, will decide and call the shots on national politics. They are also to do political trouble-shooting for Mr Shaukat Aziz. “He needs that kind of support and we will give it to him. After all, he represents the Muslim League government.” Others in the League ranks are more honest in venting their views on the arrangement. “We want to retain the Punjab at all costs. We need the establishment’s support for that. Prime Ministers can come and Prime Ministers can go at the federal level, but Punjab’s political power is forever. We will do all to retain this seat (of real power in politics),” says a Muslim League leader from the Punjab.

However, there are other issues at work as well. Shaukat Aziz’s accession to the throne has not killed the ambitions of others in the League to eye the slot for themselves. Chaudhry Pervaiz Elahi, Punjab’s chief minister, is looking at life beyond Shaukat Aziz and his close aides say that Islamabad is his next political stop-over. “Shaukat Aziz may have the military’s backing, but on his own he cannot walk a step in the minefield of national politics. Even in this age of technocrats, we need strong national leaders. Pervaiz Elahi is one of them,” says the Punjab chief minister’s close aide.

There are others as well. Besides Humayun Akhtar, Mushahid Hussain is another wanna-be, lurking on the side lines.

These hopes are a statement, as much on the state of the Muslim League’s internal politics, as on the political standing of Shaukat Aziz. Without President Musharraf’s protection , he is fair game for daylight shooting. That makes him even more dependent on President Musharraf than both of his League predecessors: Chaudhry Shujaat Hussain and Zafrullah Jamali. Aziz may not mind this, for most of the political problems that he is supposed to tackle aggressively are mind-boggling. His track record in untying complicated political knots is heart-warming. If numerous failed attempts at building consensus on say, the National Finance Commission are any guide, Shaukat Aziz will take time to develop the finesse to harmonise conflicting positions in a badly divisive and vitiated environment. Till then, he will look to the President to provide the strength and the wherewithal to live up to his position as a doer and deliverer. This might work for Shaukat Aziz, but not necessarily for the parliamentary form of government the constitution still mandates. Under Shaukat Aziz the scale and scope of the power of the prime minister’s office will further dwindle and for all practical purposes it will merge with the presidency.

For that reason, Aziz’s crowning has to be seen as the highest point of the power of President General Pervez Musharraf. Not only has he got a man without any political roots at the post of Prime Minister, Musharraf also has the ruling Muslim League eating out of his hands. He no longer has to worry about being undermined by non-performers like Jamali. Or spend time warding off political influences distracting the Prime Minister from his prime duties. Now he has Shaukat Aziz. In public, a silky, suave modern man, with the right kind of sound bites. In reality, a dashing errand boy, never remiss in carrying out his orders.