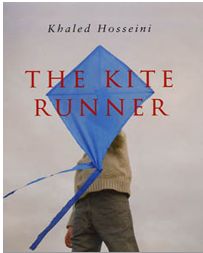 Over the last three decades, a war-torn Afghanistan has witnessed massive refugee emigrations to Pakistan and Iran. Much of the Afghan urban middle-class fled to America and Europe where they have struggled to sustain their heritage and play a role in the politics of their country from afar. Khaled Hosseini’s family left Kabul for California via Peshawar when the civil war broke out in 1980 .

In The Kite Runner, his debut novel, Hosseini, also a physician, brings his culture and people to a western readership. This is done through a fictionalised account of the enduring though painful relationship between a father and his two sons.

Hosseini’s narrator is the young and privileged Amir who lives in a sprawling mansion in the Wazir Khan neighbourhood of Kabul with his merchant father and two servants. Amir is a Sunni Muslim whereas his devoted young boy-servant Hassan is part Hazara. Hassan and Ali, his father, are Amir’s faithful companions throughout his early childhood in Kabul before the Communist coup, when peace reigned amidst a cultured and educated Afghan people.

The story is one of friendship and betrayal, secrets and lies, greed and jealousy. The fragility of the relationship between Amir and Hassan as young boys is echoed in that between Amir and Baba, his father. Yet both relationships develop, run the test of time and evolve to build bridges of trust.

The novel begins with enthralling descriptions of Afghanistan as a country of peace, love and music; where dried mulberries, bunches of blood-red pomegranates, oranges, honey and kites are part of an almost idyllic lifestyle.

Amir enjoys his evening treks to the top of the hillock behind his house where he eats bold red pomegranates and reads passages from Persian classics to Hassan. Hassan does household chores during the day whilst the rich kid is driven to school in a Ford Mustang. Baba secretly hopes that his son will develop the traditional interests of an Afghan boy, rather than writing poetry and short stories which he sees as a sheer waste of time.

Despite the fact that Hassan is also eager to go to school, he bears Amir no resentment and is, in fact, a loyal companion to a boy whose mother died in childbirth and whose father is often preoccupied. “We would sit across from each other on a pair of high branches, our naked feet dangling, our trouser pockets filled with dried mulberries and walnuts…. I can still see Hassan up on that tree. A face like a Chinese doll chiselled from hardwood,” Amir recalls.

Hassan’s loyalty is apparent right from their childhood escapades through to the end when it becomes Amir’s turn to prove his worth and his devotion. As a boy servant, Hassan protects Amir from the sadistic Assef, armed with his infamous stainless steel brass knuckles and his band of neighbourhood bullies. Amir, in turn, entertains Hassan by reading him heroic Afghan folk tales.

Hassan’s recognition as an accomplished kite flyer (at the annual kite flying tournament), a huge spectator sport, leads to sectarian concerns. Capturing prized kites when their lines are cut during a competition, Hassan is brutally assaulted for being a Shiite.

He writes: “For kite runners, the most coveted prize was the last fallen kite of a winter tournament. They thought of it as a trophy of honour…When the sky cleared of kites and only the final two remained, every kite runner readied himself for the chance to land his prize…And when the last kite was cut, all hell broke loose.”

Hassan is mocked by the boys for his ethnicity, his Mongoloid features and his hare lip but he stoically ignores their taunts and moves away. However, he is eventually captured, cornered and sexually assaulted by the bullies who later emerge as adult Taliban officials. Hosseini’s vivid recollections of pre-revolutionary Afghanistan are brimming with warmth and humour but also outline the deadly divisions between ethnic groups.

Amir, who does not rescue Hassan from Assef, but hides for fear of his own life, is tortured by memories of Hassan’s suffering as an adult.

Baba personifies all that is reckless, spirited and arrogant in his dominant Pashtun tribe. He enjoys watching the Afghan national pastime, buzkashi, in which galloping horsemen bloody one another as they compete to spear the carcass of a goat. Yet, he is generous and tolerant when he presents Hassan with a birthday present which constitutes an operation to repair his hare lip.

After the Communist coup, Baba and Amir escape to the US where Baba works long hours at a gas station to put his son through school and also sells goods at a weekend flea market , along with other Afghan exiles. The relationship between father and son changes dramatically as they come to rely on each other on an equal footing. Hosseini’s narrative-in-exile moves swiftly as he depicts a great yearning by the older generation for their once stable and beautiful country, now deemed a distant memory. Many of these exiled Afghans, once generals in their own country, manage to keep their ancient standards of honour and pride alive.

The novel recalls the atrocities of the Taliban regime as Hosseini traces the story of Hassan and that of his wife and son back to a Kabul now destroyed by the ravages of war.

The dramatic tension builds up as the reader walks with Amir through the streets of Kabul on his search for Hassan’s young son, Sohrab. Haunting images: a man who is desperate to feed his children attempts to sell his artificial leg in the market; an adulterous couple stoned to death in a stadium during the halftime of a football match; a young boy forced into prostitution, are all part of the latter end of the novel, rendering its political content brutal. Such vignettes also remind one that the old way of life has all but gone.

When Amir meets Assef, his dreaded nemesis — now a Taliban official, he survives a bloody confrontation to settle old scores. The old Amir momentarily makes way for the brave new man who has come to exact revenge. With good triumphing over evil, this part of the novel seems more like a folk tale.

Political events drive the novel and at its core is the tragic fate of a country and its people who show remarkable resilience in the face of constant violence, displacement, and death.