“I’m eighteen with a bullet,” goes a popular song from the mid-1970s. “Got my finger on the trigger, I wanna pull it.” A decade or so before that, John Lennon made a song out of a cover line he found on a glossy American magazine dedicated to weapons: “Happiness is a warm gun.” He later became one of the best known victims of the very culture of violence he had sought to satirise. And Johnny Cash, who died earlier this year of natural causes, used to sing about how “I shot a man in Reno just to watch him die.”

Ample testimony to the fact that America’s obsession with guns has soaked through its cultural and social fabric. Poverty and disease are big killers on a global scale. Violence, however, is an even bigger killer. And in a majority of cases it is perpetrated via weapons. Not nuclear missiles or bombs but handguns, automatic rifles, grenades, landmines and the like.

In calling some years ago for measures to restrict the proliferation of small arms, United Nations Secretary-General Kofi Annan described them as weapons of mass destruction. The description is hard to quarrel with, given that conventional weapons have, over the years, wreaked far more havoc than nuclear, chemical or biological devices. Yet it is generally only the latter whose spread is frowned upon (chiefly by those who own them in large quantities), whereas small arms can freely be manufactured and traded.

These are among the points made by Shattered Lives, a recent report put together by Amnesty International and Oxfam, that calls for a concerted effort at all levels for effective arms control.

“Small arms,” it says, “are present in every country of the world. They are used in every single conflict — and used exclusively in most. They play a key role in perpetrating abuses of international human rights and humanitarian law… More injuries, deaths, displacements, rapes, kidnappings and acts of torture are inflicted or perpetrated with small arms than with any other type of weapon.”

The statistics it cites are truly horrific, putting the number of small arms in the world at 639 million — with 60 per cent of them in civilian hands. In Pakistan, according to the report, there is one gun for every 5.8 people — which, not surprisingly, is well above the international average.

As an urban phenomenon, the ubiquity of firearms is a relatively recent development in Pakistan. During the early 1980s, General Zia-ul-Haq’s repeated denials that Pakistan was serving as a conduit for the flow of arms to the Afghan mujahideen, were widely considered to be among the General’s more blatant lies. But in retrospect they seem more like half-truths, given that a significant proportion of the weapons intended for the noble freedom fighters (who, in time, spawned the Taliban as well as Al-Qaeda) ended up on the Pakistani black market. And a number of generals suddenly became very rich, although perhaps not quite as rich as those who concentrated on the heroin trade.

Quite a few of these weapons, interestingly enough, were replicas of Russian small arms (notably the Kalashnikov) manufactured in Israel and paid for with Saudi money. During roughly the same period, when the US wished surreptitiously to assist another unscrupulous bunch of bandits to bring down the Sandinista government in Nicaragua, it did so partly through the circuitous route of selling Israeli weapons to Israel and channelling the proceeds to the Contras. This, mind you, was at a time when Iran was locked in a war against Iraq — and the US was militarily assisting Saddam Hussein as well. 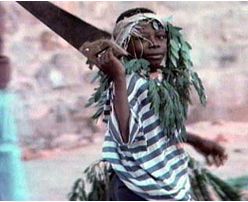 These examples show just how convoluted the arms trade can get in tricky circumstances. The mujahideen could not be supplied directly by the US, because that would prematurely have laid bare the nature of the superpower contest over Afghanistan. The Iran-Contra rigmarole, on the other hand, was necessitated by Congressional strictures against military assistance to the Nicaraguan insurgents.

More generally, however, the trade is conducted far more openly, and Shattered Lives emphasises the fact that the UN Security Council’s permanent members are by far the world’s largest arms exporters. They are not terribly particular, says the report, about whom they sell weapons to, adding that supplies to regimes and forces with a reputation for repressive behaviour have risen dramatically in the wake of September 11. It may be unreasonable to lump Pakistan with the worst offenders in that category, but the report notes that security assistance and related assistance soared from 3.5 million dollars to 1.3 billion dollars after Islamabad signed up to join the so-called war on terror. The US has also been eager to “cooperate” with military agencies in countries such as the Philippines and Indonesia, where the armed forces have an even worse reputation for human rights abuses.

Perhaps one of the most poignant examples of a nation being devastated by a weapons overload can be found in Angola, where the so-called resistance force, Unita, received a steady stream of supplies from the US, China, apartheid South Africa and Israel for more than two decades, while the government was armed by the Soviet Union and supported by Cuba. The confrontation, following Angola’s liberation from Portuguese colonial rule in 1975, took place very much in the context of the Cold War (much like the conflicts in Afghanistan and Nicaragua), but it outlasted that particular confrontation — not least because the ready availability of small arms encouraged the prolongation of territorial tussles. Needless to say, it was Angolan villagers, caught in the middle, who suffered the most.

A similar situation arose in Cambodia, where Vietnam’s 1979 invasion put an end to the murderous rule of Pol Pot. Yet the US and some of its Western allies put aside ideological considerations to supply and train the indubitably genocidal Khmer Rouge forces. The Amnesty-Oxfam report cites Cambodia as an example of a country where a peace settlement does not add up to much simply because the process isn’t accompanied by a determined effort to remove weapons from the equation.

Beyond the Cold War, the supply of weapons to combatants has been motivated chiefly by the mundane profit motive; the ongoing sporadic warfare in countries such as the Congo and Sierra Leone bears testimony to this fact. “When challenged on their failure to prevent irresponsible arms transfers,” the report says, “some governments have openly employed the morally flawed argument: “If we don’t sell it to them, someone else will.” When Tony Blair was asked why the UK was selling British parts for F16 aircraft for onward sale to Israel, when there had been clear evidence that these weapons were being used directly against civilians, he replied: “What would actually happen if we [refused to sell parts] is not that the parts wouldn’t be supplied, [it] is that you would find every other defence industry in the world rushing in to take the place that we have vacated.” Even if this were true, it would not be morally right: it is never right or good policy to sell arms to those who use them to commit atrocities.

Amnesty International and Oxfam propose a multi-pronged approach to tackling this menace. At the international level, the first step would obviously be agreements against supplying weapons to any regime or agency that could be suspected of using them for purposes incompatible with human rights. Then, national governments must endeavour to ensure that their weapons are not misused, and don’t fall into the wrong hands. At the same time, local communities are called upon to undertake to rid themselves of offensive weapons.

It’s a tall order, but the report suggests that it isn’t a hopeless cause, citing the movement against landmines as an example of a partly successful campaign. But then, landmines tend to be used mostly by established regimes, whereas handguns of every shape and size are available, not only to formally instituted armed forces, but also to criminal organisations and individuals.

But although it’s hard to imagine circumstances in which the menace can be eliminated, there are various ways of dealing with it. International agreements could prove hard to police and relatively simple to violate, but they would nonetheless be a worthy beginning. Strictures against the supply of arms to groups associated with human rights violations would also be a significant step forward, provided they are implemented uncontroversially. The community aspect of the solution could prove to be the most effective one: the ostracising of those who wield or threaten to use firearms.

However, the degree of coordination required to pull off a disarming miracle severely diminishes the likelihood of it taking place in the foreseeable future. Besides, any attempt to rid society of weapons cannot possibly succeed while they are used with impunity by official or semi-autonomous armed groups.

Shattered Lives accepts that “arms have a legitimate role” in societies and “can also play a specific role in international peacekeeping or peace-building operations.” It does not approve, naturally, of societies where the possession of arms enjoys legal protection — such as the US, where a constitutional provision introduced in revolutionary times has been retained throughout the twentieth century, despite the obvious dangers that flow from it, because the lobby of manufacturers and habitual users (as demonstrated in Michael Moore’s Oscar-winning documentary ‘Bowling For Columbine’) has grown too powerful for most American politicians to contend with.

In the event, it makes sense to sign off with verses from a quintessentially American response to 9/11. Drummed up last year by the octogenarian folk singer Pete Seeger as a tribute to Martin Luther King Jr., the chorus of the children’s song goes: “Don’t say it can’t be done, The battle’s just begun, Take it from Dr King, You too can learn to sing. So drop the gun…”

To which all one can add is: Amen.