Soorti Ram wept as she related her tale of horror. A few days earlier, a group of six young men barged into her home, beat her up and stripped her. “They were drunk, and they tore off my clothes. I don’t know how I escaped from their clutches. No one came forward to rescue me from the savages,” she said.

On September 17, 2003 in broad daylight, six vagabonds, led by sons of local landlords in Chak No. 54-55/DB near Yazman in Bahawalpur district, attempted to rape three Hindu women of the village — Bhoorti Ram, Soorti Ram and Kishni Ram in the presence of their families and other villagers. The men, apparently thwarted by the shouting of the angry crowd of women who had gathered outside Soorti Ram’s hut, released their captive. They turned their fury on the villagers, pistol-whipping them and taking the men hostage. Several villagers sustained injuries in the attack.

In desperation, the three women who had been assaulted — all Murichah Hindus by caste — approached Chaudhry Muhammad Jabbar, a landlord of the neighbouring Chak No. 56, about three kilometres away, for help. Until a few years ago, the Hindus in the women’s village had worked for him. The landlord, together with his men, arrived in Chak No. 55 and apprehended two of the alleged rapists while the rest managed to flee.

The day following the attack, a group of Hindus held a demonstration outside the office of the Tehsil Nazim of Yazman and later marched to the ASP’s office. The ASP met the demonstrators and ordered the police to file FIRs against the culprits. The police filed four FIRs; two of them charge the accused with gang rape and two with violence.

“This is the seventeenth incident in the area in which the Hindu community has been victimised. We have kept quiet so far out of fear of the landlords,” Mava Ram, a local Hindu, told Newsline . Two months ago, Ram’s daughter was also abducted by the sons of local landlords who sent her back in the morning after subjecting her to gang-rape through the night.

In another incident a few months ago, Lunia Ram was on his bicycle with his wife a short distance away from the village, when one Sohail waylaid them and after beating him, dragged his wife to the nearby cotton fields. Although Sohail did not manage to rape her before her cries alerted the villagers, the incident further terrorised the locals. 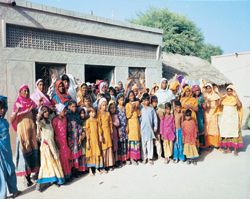 Rehana Kanwal of the Justice and Peace Commission, a national human rights body of the Saint Dominican church, said that at least 10 women of the area have been raped during the last three years, but this is the first time an FIR had been registered against the criminals.

Two of the accused, Sohail and Rashid, are free on interim bail while two others, Asif and Shafiq, are behind bars. The name of the main suspect, Tariq, has been struck from the FIR filed by villagers. A panchayat, convened at the behest of local police officers, determined Tariq’s innocence and gave assurances to this effect to the police. The Hindu community is up in arms over this action; it is seen as proof of the police’s indifference to their plight. The victims protest that the police did not believe their statements. “We feel insecure … we are treated as second class citizens,” lamented Bhoorti and Shingari Ram.

Bishop Andrew Francis of Multan visited the Hindu families and criticised the panchayat’s decision. According to Rashid Rehman advocate, the decision is of no legal value and should be challenged. The family of Sohail, who has been accused of raping Shingari Ram approached her family to effect a reconciliation, but were rebuffed.

Father Raucous Patras told Newsline that as the culprits belong to the same clan as the district Nazim, Tariq Cheema, there was little hope that he could guarantee the security of the area’s Hindu community. Another priest, Father Nadeem Joseph, said that the church had taken up the community’s cause as they were very poor and vulnerable.

According to the locals, the accused were guilty of identical excesses several times over the last three years and had got away with them because of their family connections. They had made it a practice to pick up any girl who took their fancy from her house at night and, after satisfying their lust, drop her back home the following morning.

Apart from these brazen assaults, there is also blatant discrimination against the Hindu community in Yazman. Their children do not go to school because they are mistreated by the Muslim teachers. There is only one Hindu girl studying in class eight in the government school; she, in turn, teaches other Hindu students in the evenings at a village school run by Catholic missionaries.

The village is comprised of 150 families, who earn their living by working on the local landlords’ fields. With their very survival in the feudals’ hands, the peasants, despite the excesses against their women, were cowed into silence. Such is the fear that during the recent attack, the men fled to their homes and hid there, too terrified to stand up to the perpetrators or save the women from being badly beaten.

Of these women, Bhoorti Ram has five children, Soorti Ram seven while Kishni Ram is pregnant with her first child. Like most other women of the area, they pick cotton or harvest other crops in the fields. The usual rates of payment here are two kilogrammes of wheat for every 40 kilogrammes. Likewise, they are paid between 40 to 50 rupees for picking 40 kilogrammes of cotton. But their situation is so desperate that although there are times they are not paid their dues, they do not dare object.

The publicity the three Hindu women’s case has generated may be the reason why the villagers have not received any threats from the families of the accused. Nevertheless, they continue to fear for their safety. After a lifetime under the feudal yoke, justice remains an illusory hope.