Dil Ka Kya Rang Karoon, NAPA’s fourteenth production, is an Urdu adaptation of The Glass Menagerie by the American playwright Tennessee Williams. The plot revolves around a small family comprising 27-year-old Nafeesa (Jameela Muhammad), her younger brother Salman (Saqib Khan) and their mother (Hina Dilpazeer). The father walked out on them 16 years ago and the mother has struggled to raise her children under tough financial conditions ever since.

Harsh times have made the son bitter and angry, while the mother has become a nagging bore. The daughter has turned into a fragile being, much like her glass doll collection. The mother constantly fears for the crippled Nafeesa and earnestly hopes to receive a nice marriage proposal for her. She pushes Salman to find someone for his sister at his workplace and his stock response to her is, “no one will want to marry a cripple.”

But one fine day, Salman brings home a friend from his work place. Amir Raza (Ali Razvi) is charming, easy-going and, as his character Tom says in the original Tennessee play, “The most realistic character in the play, being an emissary from a world of reality that we were somehow set apart from… He is the long-delayed but always expected something that we live for.” His expected arrival causes quite a flutter in the household. Salman’s mother rushes out to buy new lampshades and whips up a feast. But when Nafeesa learns that Amir is the boy she was infatuated with in college, all her insecurities rise to the fore. Her inferiority complex becomes a deformity, worse than her physical one.

Amir puts her at ease, reliving memories of college and his former glory days as the drama club king. Nafeesa relaxes, revelling in his attention. He tells her that she is special, that she should have someone worthy of her. Nafeesa is elated but the illusion is soon shattered by Amir’s admission that he is already engaged to be married. He departs abruptly, leaving the mother and Nafeesa devoid of any hope for the future. The mother turns on Salman, holding him responsible for all that has transpired. After an angry exchange with his mother, Salman walks out of the house — just like his father did.

Dil Ka Kiya Rang Karoon explores with poignant sensitivity and how social and economic pressures impact the family unit — a very relevant theme in the Pakistani context. The themes and values explored in The Glass Menagerie, which was written 60 years ago when America was going through a period of economic depression, are as pertinent today as they were then.

The credit for the translation goes to Iqbal Nazer who tried to stay true to the spirit of the original version. However, at times, his translation was so literal that it did not seem to make sense in the local milieu. For instance, in the original, Jim (the gentleman caller) playfully referred to Laura as “blue roses” because he had misheard her deformity, which was “pleurosis”. However in the adaptation one failed to understand why Amir called Nafeesa “neela gulab.”

Williams’ plays have detailed instructions on the manner of stage and lighting, and these were followed to a tee by Dil Ka Kya Raang Karoon’s director Anjum Ayaz. The set design was excellent as it recreated the ambience of a lower middle-class home with broken furniture and decrepit walls. The lighting captured the fuzzy edges of the selectiveness of memory on stage as it dimmed and brightened at key moments. An entire act of the play, when Nafeesa and Amir are in conversation, was done by a soft overhead light and candles which created a beautiful and tragic picture. 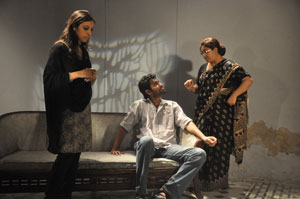 The background music was equally poignant: a melancholic violin played at the end of each act. The sound effects of rain and thunder were also effective but, at times, they were so loud that they drowned out the dialogue.

The actors gave a stellar performance. Veteran actor Hina Dilpazeer brought out her best from years of television experience. The younger actors were on par, and their energy levels never sagged. Jameela Muhammad was amazing in the manner she limped about on stage as she delivered her lines with pathos.

As the play moved towards the climax, it became too wordy and philosophical causing some members of the audience finding it difficult to stay focused. Moreover, Salman’s musings on the world and the human condition came across as the whines of a teenager who is angry with the world at large. This is where the play faltered and seemed to get slightly lost in translation.

But overall, Dil Ka Kya Rang Karoon was well acted and directed. NAPA deserves credit for bringing an American classic to eastern audiences in a socially relevant and sensitive manner.

This post originally appeared in the August 2010 issue of Newsline under the title “Desperately Human.”