Five studies were conducted in the period from 2008 — 2010 that basically all concluded that radicalism is linked with poverty, poor governance, political instability, poor quality of education and the inability of the education system to create social mobility.

Analysing and discussing the mindset of Pakistan’s youth has become popular among academics and political pundits internationally. The seeds of this fertile topic were planted post-9/11 when an increasing focus on militancy in Pakistan caused observers to start digging into the nation’s madrassa culture. Numerous studies have delved into the subject. But the more prominent ones are by the International Crisis Group (ICG), the World Bank, Ali Riaz, Saleem H. Ali and Christine Fair. The global concern with madrassas is directly linked to the Afghan Taliban movement. Since those warriors were trained in religious seminaries, the obvious tendency has been to look at the problem that madrassas posed.

A couple of years ago, however, a new approach to examining the issue of youth and militancy in Pakistan took root. Analysts started looking at the subject both in relation to the madrassa and independent of it. Five studies were conducted in the period from 2008 — 2010 that basically all concluded that radicalism is linked with poverty, poor governance, political instability, poor quality of education and the inability of the education system to create social mobility. These studies indicate certain trends that should be observed carefully.

Prospects of Youth Radicalisation in Pakistan: Implications for US Policy by Moeed Yusuf (Brookings Institution — October 2008)

The study was based on approximately 350 responses from Swat and Malakand. Yusuf linked radicalisation among young people to poverty, education (including religious education), poor governance and Pakistan’s poor image abroad, especially after 9/11. The study emphasised that the poor quality of education and its inability to help students gain entry in the job market are major problems. Moreover, the author concluded that under-qualified mullahs in religious seminaries created a faulty understanding of religion. Still, in his recommendations Yusuf argues that the insistence on secularising Pakistan should be discontinued as it creates a wedge between the West and Muslims in Pakistan. He believes that Pakistan “…abhors secularism and extremism at the same time.” Such conclusions were made without necessarily challenging the definition of secularism by the orthodox school of thought in Islam or Pakistan, in particular. Focusing mainly on the US government, the author recommends that Washington invest in education and fight radicalism through creating a friendly image of itself among the youth of Pakistan. This, he proposes, can be done by relaxing the visa policy and helping with the resolution of the Kashmir dispute between India and Pakistan. The author also believes that contrary to public perception, the military does not encourage radicalisation of society, including its youth, for reasons of strategic depth. This is a fallacy.

The Pakistan Institute for Peace Studies’ study by Saba Noor was conducted at the Department of Defence and Strategic Studies, Quaid-e-Azam University, Islamabad. The sample of 70 people comprised students aged 20-35 and represented youth from both rural and urban backgrounds. This categorisation was fundamental to the conclusion that students from a rural background had a greater tendency towards radicalisation as compared to those from an urban background. The sample appeared liberal, especially when it came to social and political matters. For instance, the respondents rated scholars and intellectuals as more trustworthy than even the military, which got only 7% support. The support for military rule, however, was greater than that for politicians who were supported by only 4% of respondents. Noor’s study seemed to indirectly conclude that education is necessary to fight radicalism and, perhaps, political apathy. The fact that the bulk of respondents considered scholars and teachers more reliable as a social group could have been driven by environmental influences rather than their true beliefs. However, the study failed to analyse the reasons behind this particular response.

Pakistan: The Next Generation Report by the British Council (2009)

Released in November 2009, the survey was administered to over 1,000 youth from all over the country comprising both literate, semi-literate and illiterate youth in both rural and urban areas, aged 18-29. The report considers a lack of human and socioeconomic development as the key issues behind youth radicalisation. It highlights the dissatisfaction and frustration of youth with the lack of systems in the country. 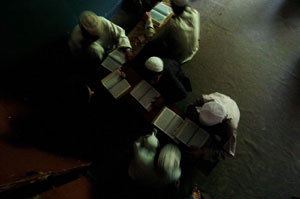 Like other studies, this report also demonstrates that the lack of employment opportunities, poor education and lack of good governance are some of the primary concerns of the young adults. The deteriorating quality of education causes them to be less competitive in national and international job markets, and resultantly, they feel greater frustration. The survey also showed the lack of faith of the youth in political leadership – a trend that exists in all the five reports referenced here. Sixty per cent of those surveyed trust the military more than politicians. This, the report argues, speaks volumes about the lack of confidence amongst the youth in the political system across the socioeconomic spectrum. The confidence problem could also be linked with Pakistan’s image as a state caught in the whirlpool of violence and extremism. So, while the youth considered their country as the best, they also believed external threats were factors leading to the poor conditions in the country. The primary conclusion of this report was to invest in education and energy resources which. in turn, would create opportunities for the young generation.

The Center for Civic Education (CCE) in Islamabad wrote a third report based on a survey of 1,855 people from 13 districts all over the country. According to this study, 69.6% of the sample said that there was an increase in extremism among Pakistan’s youth. But about 85.4% were hopeful that the situation could be changed, especially by the youth playing a positive role. The report very systematically laid out reasons for extremism such as poverty, illiteracy, unemployment, intolerance, denial of fundamental rights and absence of a solid system of governance. The suggestions presented by the CCE focused on improving socioeconomic and political development in the country and initiating a debate through the media.

Beyond Madrassas: Assessing the Links between Education and Militancy in Pakistan by Rebecca Winthrop (Brookings Institution — 2010)

This Brooking’s study presents a broader analysis of Pakistan’s education system for which it draws upon existing studies on madrassas and Pakistan’s education system. It highlights a demand for education that far exceeds government resources to supply it. As a result, youth in Pakistan have been attracted to various alternative systems of education, including madrassas. However, Winthrop does not necessarily highlight religious seminaries as a problem. She bases this conclusion on Christine Fair’s study of madrassa education in Pakistan. Fair’s conclusion was that militants do not necessarily all come from madrassas but from government schools as well. Both Fair and Winthrop, hence, conclude that madrassas are not a problem. In doing so, they fail to capture the larger impact of madrassas on society. Far more problematic, however, is their conclusion that since public-sector education cannot be repaired, foreign donors should strike a partnership with the private sector. This is exactly what Salman Shah had said in his presentation in Washington, DC, in 2005. He had asked American donors to invest in private universities like LUMS instead of public sector universities. The idea of diverting resources to the private sector has its pitfalls. According to the Pakistani-American scholar, Adil Najam, who is based at Tufts University, schools in the private sector including those run by non-profit NGOs add to the existing multiple layers of school systems. What the country needs perhaps is a uniform system and standard that could also help bridge social and class differences. An education system must also cater to bridging the class divide.

The Conservatively Hip
The Curious Cases of Siddiqui and Shahzad