When Salman Butt led Pakistan to a stunning three-wicket triumph over Australia on July 24 at Headingley — their first Test win against the Aussies in 15 years — former legends like Javed Miandad and Zaheer Abbas hailed it as the beginning of a new era.

It sounded like dÃ©jÃ  vu. Back in 2007 when Inzamam-ul-Haq was forced to step down as captain after leading Pakistan to a humiliating first-round exit from the World Cup in the Caribbean, the country’s cricket chiefs decided to invest in the young Shoaib Malik, hoping that the all-rounder would succeed where Inzamam failed. And when Malik’s team bounced back in the inaugural Twenty20 World Cup in South Africa just month’s after the Caribbean disappointment, critics declared that Pakistan have finally found a long-term solution to their long-standing captaincy problem.

But in January 2009, Malik was dumped as captain after Pakistan suffered back-to-back ODI defeats against Sri Lanka in Karachi and Lahore by embarrassingly large margins.

Younis Khan, who had earlier refused the captaincy, succeeded Malik as captain and hit a match-saving triple hundred in Karachi against Sri Lanka soon after taking the responsibility. But it was Pakistan’s historic title-winning triumph at the 2009 World Twenty20 in England that made experts compare Younis with the great Imran Khan. Many thought Pakistan’s wait for a great captain — a new Imran Khan — was finally over.

Sadly, this wasn’t the case. Just months after the Twenty20 World Cup win, Younis stepped down as captain, declaring that he wasn’t getting much-needed support from most of his teammates. The Pakistan Cricket Board (PCB) scrambled to find a replacement for the lengthy twin tour of New Zealand and Australia and finally voted in favour of veteran batsman Mohammad Yousuf. But Yousuf flopped miserably in Australia, where Pakistan lost all their matches.

For this year’s Twenty20 World Cup in the West Indies, the PCB showed faith in Shahid Afridi, who was later installed as captain for all three formats ahead of the Asia Cup in Sri Lanka in June. Afridi was unable to inspire his team despite hitting two splendid centuries in the Asia Cup in Sri Lanka, but he sparkled as captain by leading Pakistan to back-to-back Twenty20 victories against Australia in Birmingham. It seemed Pakistan had finally found a captain good enough to keep the otherwise bickering players fully united.

But there was yet another twist. Just minutes after Pakistan lost their first Test against Australia at Lord’s, Afridi, who had come out of a four-year Test exile to lead Pakistan, dropped a bombshell by telling a British radio station that he had decided to retire from Test again.

Salman Butt, Afridi’s deputy for the marathon tour, was elevated to take over the team’s captaincy. Like many of his predecessors, Butt began with a bang by becoming the first Pakistani captain since Wasim Akram to win a Test against Australia.

But is it beginners luck? It won’t take much time to know for sure. Pakistan will play a four-Test series against England later this summer and the assignment will prove to be a litmus test for Butt, both as the team’s captain and one of its most prolific batsmen.

Unfortunately, like many of his predecessors, there is a big possibility that Butt could get let down by a Test squad that is inconsistent at best. Both at Lord’s and Headingley, Pakistan’s match against Australia, almost solely relied on their potent pace attack while their batting continued to be their Achilles heals. The Pakistanis fell short at Lord’s but somehow managed to go all the way at Headingley thanks to a brilliant display from their pace trio of Mohammad Aamer, Mohammad Asif and Umar Gul, which dealt a killer blow on the opposition on the first day of the Test by flooring the Aussies for a paltry 88 in the first innings.

But a chain is only as strong as its weakest link. Butt has a lot of weak links in his team. And most of them are in the touring party’s batting line-up.

The left-handed opener did a good job against the Aussies, but Pakistan are still not confident about their opening partnership. Then comes the crucial number three position where the young Azhar Ali has impressed but his inexperience could be exploited by a very impressive English bowling attack. Coming at number four is Umar Amin, the left-handed rookie, who failed to fetch many runs in the series against Australia. When Pakistan last toured England for a Test series — back in 2006 — Mohammad Yousuf scored loads of runs playing at that position. But Umar Amin is no Yousuf and his captain must be aware of that.

Umar Akmal, in the meantime, was one of the biggest disappointments for Pakistan in the series against Australia. The youngster is regarded as one of the exciting young talents in world cricket, but failed to translate his talent into runs for Pakistan. 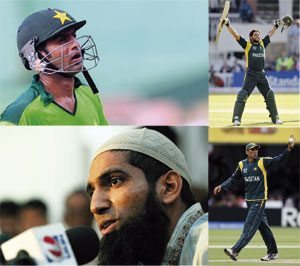 Shoaib Malik, who was recalled to replace Afridi at Lord’s, was appalling and will have to find form to deserve a place in the squad. Kamran Akmal, too, failed to take responsibility in spite of being one of the senior-most players in the team. But perhaps, the man with the most responsibility on his shoulders is the captain himself. A series-leveling win over Australia has raised expectations back home and now Butt and company will have to give their best shot against England.

Captaincy, especially when we are talking about Pakistan cricket, comes at a big price. Butt will have to learn from the examples of Malik, Yousuf, Younis and Afridi. Pakistan have a habit of changing their captains, and their cricket chiefs won’t hesitate much to find Butt’s replacement if things start to fall apart for Pakistan in England.

The early signs, thankfully, look quite good. For a change, Pakistan have managed to give captaincy to a young man who is eloquent and confident and is perfectly capable of speaking his mind even in front of a global audience. By passionately appealing to his compatriots to support the Pakistan team through thick and thin after the Headingley victory, Butt has certainly struck a chord. At the post-match presentation, the 25-year-old used the opportunity to highlight the fact that Pakistan cricket is suffering because of the lack of international matches on home soil. His comments were well-timed and came as a refreshing reminder that this time our team has a leader who knows what to say on such occasions. Hopefully, Butt will also show us that he knows now to get the best from his players. However, only time will tell whether we’ve made the right call this time.