Minutes before Airblue flight ED202 crashed into Margalla Hills on July 28, it circled the skies of Islamabad in efforts to safely land the 152 people on board amidst grey weather conditions. Nothing was remarkably unusual that day; many pilots landed their planes under Islamabad’s varying climate several times a day. Sure there was a little extra fog in the skies, but nothing an experienced pilot couldn’t handle. Unfortunately, fate bore circumstances that even flight ED202’s highly seasoned pilot could not manage to control. That this is the biggest aviation disaster in Pakistan’s history is up for debate, but it’s definitely the one with the most fatalities on Pakistani soil; not a single passenger or crew member survived it.

The circumstances of the plane crash are ambiguous, and although the flight data recorder, or black box, was said to have been found on the fourth day of the crash, nothing had been revealed about its contents when this article went into print. In fact, analysis of the data recorder, which will be done by Airbus in France, may take as long as six months. President Zardari has urged officials to conduct a detailed investigation to find out the exact cause of the crash, but no time frame has been given for anything to be made public. However, speculation was rampant in the immediate days that followed and many possible factors and explanations were examined in the media.

The weather was a primary one. Islamabad was damp with rain and fog, lending to the low clouds through which the plane was forced to descend for its landing. Mr Naseem Ahmad, an aviation expert and also a founding member of the International Society of Air Safety Investigation (ISAFI), believes, “The weather can be a contributory factor, but not the exact reason.” Two other flights before this were diverted from Benazir International Airport on account of weather, but ED202 made a “missed approach”: when trying to land the plane, the pilot couldn’t safely do it and decided to climb back out, make a turn and attempt a second landing. But in this case, instead of making the mandatory turn, Captain Pervaiz Iqbal Chaudry kept going straight at a low altitude. Eventually, the plane lost contact with the control tower and collided with Margalla Hills. The last few moments of contact with the control tower reveal that Capt. Chaudry knew he was heading towards the no-fly zone of Margalla Hills, yet no distress signals were given. The data stored on the black box will help ascertain the state of the plane moments before its crash. Low visibility could be one of the reasons that the pilot decided against landing, but the pilot clearly stated that he could “see the runway.” With the little evidence that has been offered, many people, experts and not, are pointing towards this being a case of “pilot error.” There appears to be much conjecture about the plane’s alarming altitude, the direction it was travelling and the lack of concern in the pilot’s voice when the pilot was warned twice by air traffic control that he was straying from course, but these are all meaningless details without knowing what really went on in the cockpit seconds before the crash.

Ahmad from the ISAFI offers that pilots have detailed knowledge of their conditions when they decide to land: “The way planes are built these days, they are able to ascertain the weather very accurately, and the pilot has full information on this,” says Ahmad. “The ultimate decision to land is always the pilot’s.” It has also been publicly shared that Runway 30, the runway on which the plane was to land, is equipped with an Instrument Landing System (ILS). This system provides precision guidance to an approaching aircraft using a combination of radio signals and high intensity lighting arrays to help pilots land in even the worst of conditions. Additionally, keeping in view the risky terrain surrounding the airport and the chancy weather, especially during the monsoon season, the runway is also equipped with beacons that provide pilots with complete information regarding height and distance when an aircraft approaches the runway.

Other media reports questioned whether Capt. Chaudry should have been flying at all: he was 62 years old. Chaudry had retired from PIA when he reached the airline’s mandatory retirement age of 60 years, but went on to join Airblue, which retires pilots at a higher age of 65. “Previously, the retirement age for pilots was 60 years, but in accordance with international standards, this was changed to 65 years. The retirement age is only a recommendation that each country may or may not choose to follow. It is not mandatory by any means,” says Ahmad. Although age is not such a huge factor in itself, it is important to consider the health of the senior pilot who reportedly had 35 years and more than 25,000 hours of flying experience under his belt. It has been reported that nearly two months ago, Capt. Chaudry was grounded and admitted to Aga Khan Hospital on account of serious health issues: diabetes, hypertension and cardiac problems. Furthermore, the president of Pakistan Air Lines Pilot Association (PALPA), Captain Sohail Baloch, suggested that the pilot may have been suffering from fatigue because pilots are often not given adequate leave. An article in the Express Tribune on July 29, also indicated that this was Capt. Chaudry’s first time flying this particular aircraft. But that could be a red herring. “It doesn’t matter if this was the first time he was flying this aircraft,” says Ahmad. “All pilots have a first-time flying different aircraft but that is never viewed as a handicap for the pilot.” 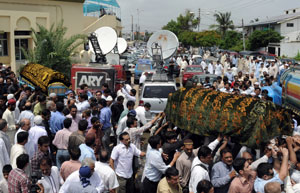 The third major speculated cause of the crash has been attributed to possible technical failures on the Airbus A321. Many safety concerns have been raised in the past over aged and faulty aircraft that aren’t checked in accordance with international safety standards. In fact, it was for this very reason that Pakistan International Airlines’ (PIA) aircraft were banned from landing in Europe in 2007. However, with regards to the age of this particular aircraft, Airbus released a statement saying, “The aircraft [was] initially delivered from the production line in 2000… [It was] leased to Airblue in January 2006. The aircraft had accumulated approximately 34,000 flight hours in some 13,500 flights.” Aircraft have an average life span of 30-40 years, rendering this 10-year-old aircraft relatively young. Additionally, Airbus has offered to “provide full technical assistance to the authorities of Pakistan who will be responsible for the investigation into the accident.” A day after the crash, a six-member Airbus delegation led by Nicolas Bardou, the director of the aviation company’s flight safety division, arrived in Islamabad to assist with the investigations.

Investigations, however, did not start off well. A lack of organisation by the Defence Ministry and National Disaster Management Authority (NDMA) resulted in much post-crash chaos. “Procedures have never been exercised in the event of a civil air crash. Aside from rescue operations, rescue groups should know that the aircraft will be subject to an investigation, and their most important task is to cordon off the area of the crash site to gather all the evidence they can. This plane did not crash into a sea, it crashed on land. Sealing the area would have reduced the probability of the black box being stolen or even the possessions of the passengers [being removed from the crash site],” says Ahmad.

The cause of the crash may forever remain a mystery to the grieving public. While an investigation has been ordered by President Zardari and PM Gilani, the government has a history of concealing plane crash findings of the Civil Aviation Authority (CAA) from the public eye. They are yet to make public the findings of three previous major plane crashes: the 1988 crash that took the life of General Zia-ul-Haq; the 2003 crash near Kohat that took the life of Air Chief Marshal Mushaf Ali Mir and 16 other officials; and the 2006 crash at Multan airport that took the life of all civilian passengers on board. In the case of prominent public figures being involved, it is understandable why such findings may be concealed, but what, asks an unnamed CAA official in Dawn, stops the government from revealing details of crashes such as the Multan Fokker crash? 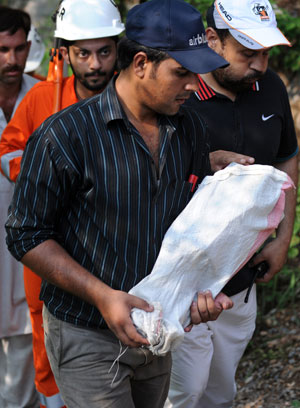 No survivors: Identifying bodies and returning the remains to family members was a painful and difficult task. Photo: AFP.

The aggrieved aren’t the only people who’ll be interested in the outcome of the investigation. In order to arrive at appropriate insurance claims and compensation packages, details of the plane crash are going to be mulled over by aviation lawyers. In a news conference, Airblue’s Chief Operating Officer, Shahid Khaqan Abbasi, addressed some of the potential settlements for victims’ families. He said that on the jacket of each Airblue ticket, it is stated that Airblue’s insurer would pay Rs1 million to the kin of each victim, but that amount is not necessarily final. EFU General Insurance is Airblue’s insurer and Willis Group its reinsurance company. “The final insurance package will be calculated by the reinsurer company along with Civil Aviation Authority and domestic insurance rules,” Abbasi said. He further added that this will be a complicated matter since there is no clear law for passenger insurance in Pakistan. Depending on whether they abide by local conventions, or international ones, the compensation amount Airblue is liable for might vary anywhere from Rs1,000,000 to Rs12.8 million per family. The government has announced to pay an additional Rs500,000 to families on top of what the insurance company pays.

Rescue and salvage efforts were continuing when Newsline went to print during the first week of August. The priority for many families still is to have the remains of their loved ones returned. As of August 1, authorities were still identifying the remains of at least 40 victims. Meanwhile, till the investigation provides some answers, all that grieving families can take comfort is in the fact that the whole nation grieves with them.

This article was originally published in the print version of the August issue of Newsline under the title “When Blue Skies Turned Grey.”