A student’s fervour to translate a mentor’s dream and a curator’s enthusiasm to frame a project around it brought forth a novel tribute show, ‘Fatah Jay Assey Passey,’ recently exhibited at VM Gallery. Fatah Halepoto has taught a legion of students in his native Sindh and the idea to build a show with his pupils was initially articulated by artist M.A. Talpur but put on the anvil by curator Hammad Nasar of Green Cardamom. Centralising on the works of some immediate students (Ahmed Ali Manganhar, Mohammad Ali Talpur, Imran Channa, Nizam Dahiri and Fakeero) as well as those who knew him by proxy (Ayesha Jatoi and Arif Hussain Khokhar), this exhibition explores Halepoto’s influence on the intellect and initial art practices of his devotees hailing from rural towns and villages in Sindh. Now, as NCA-qualified artists with national and in some cases international success to their credit, they have gone beyond traditional interpretations to formulate contemporary manifestations of Halepoto’s vision. 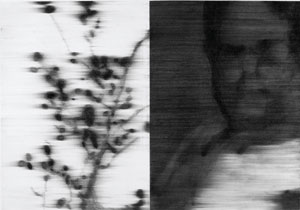 Employed at the teacher training centre in Hyderabad, Fateh Halepoto trained art teachers for government-run middle and high schools in Sindh. He also gave art lessons to interested pupils who visited him for the technical knowledge that he imparted and for the ethos he and his surroundings exuded. Curator Talpur points out that “Sain Fatah was quite a striking character, even to look at; he dressed and looked more like a movie star than a teacher and the place he lived in had so many small, delicate and quirky touches. When we went to see him it was like entering a different world where anything seemed possible. He had a real sense of the type of person he should be — a very strong moral sense.” An intellectual with a modernist stance, Halepoto fired the imagination of these young aspirants with his philosophical discourses on life, politics, art and culture. He set them goals they never imagined possible. Talpur discloses that he “persuaded Ahmed Ali to go to (NCA) in 1993 and I followed him in 1994.” Other than widening their horizons it was raising “the bar high for all of us (them),” that enabled these hinterland artists to transcend their insularity and emerge as “samurai,” capable of establishing their presence in the art world as individuals. That they returned to breathe new life into the imagery of Sindh was the crux of this show. On viewing the exhibition the unassuming Sain Fatah remarked, “My only contribution was to teach them the fundamentals, but they have built on it and gone far beyond my expectations.”

Almost two years in the making, the project, while entertaining vastly individual expressions, was essentially underscored by the participants’ deep attachment and regard for the past. Referring to the indigenous glory of Sindh, its strong literary and aesthetic traditions and a culturally rich environment, the works espouse a marked sense of loss, of histories rewritten or tampered with, and a strong feeling of being marginalised. 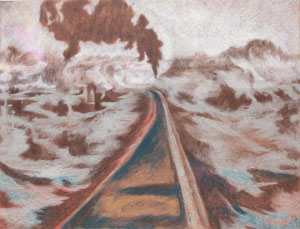 Artist Ahmed Ali’s interweave of flashbacks conceal as much as they reveal. Weaned on the primitive art of painting cinema hoardings alongside Halepoto’s teachings, his recall is veiled in images piled on top of each other. One could catch glimpses of a dashing hero or a flying horseman over painted portraits of eminent old Muslims and Hindus of Sindh. Similarly the very talented Fakeero sculpts and draws Hindu deities with as much sensitivity as he pencils quaint images of rural Sindh. But showers of droplets blurring the clarity and definition of his forms spell the sadness of erasure in his recount. Distinct pockmarking and deliberate dislodging to destabilise the image from its context, is how Imran Channa captures vanishing cultures and loss of histories. Nizam Dahiri’s misprint effect is just as direct. Portraits of common people in ball point or marker on paper are rendered as split images to create an effect of dislocation. For M.A. Talpur time is encompassed in the tightly knit grid or the serrated linear arrangements — minimal expressions of diminishing values, traditions and ideals. Ayesha Jatoi, outside the main cluster of students, assimilates the Halepoto aura through her conversations with Ahmed Ali and compiles her reflections in the Artists Notebook. And Arif Hussain Khokar connects with the Halepoto lineage as a student of M.A. Talpur.

In contrast to institution builders like Shakir Ali and inspirational practitioners, teachers like Zahoorul Akhlaque, Halepoto inspires by example, not only in art but also in life. Rather than to impose or confine his students to ‘isms,’ he encourages them to draw from nature and navigate their own path. This accounted for the diversity of approaches visible in the show. Fakeero’s literal renderings were eye-catching (the only artist in the group who did not attend art school), but one expected more technically proficient executions from the rest of the graduate artists. They chose to emphasise the concept of ‘erasure’ of Sindhi culture and nationalism rather than accentuate their working skills. The deprivation or injustices implied were suggestive but not pointed enough to give a sharp edge to the collection. This exhibition also highlights a disconnect between the art environment in Sindh, Karachi and Lahore. Widely recognised and respected in Sindh, Halepoto has just been formally introduced to Karachiites through this show. A Sindhi/English exhibition catalogue also indicates that unlike other provinces there is an active art readership in the region. Similarly Engro Corp visibly manifested their interest by sponsoring the show.