Wikileaks has done more than create an international controversy about the conduct of war in Afghanistan and the dirty hands that all the regional and global players are playing in it. For Pakistan these leaks have thrown up a grim foreign policy challenge, besides sharpening the possibility of a showdown between the Asif Ali Zardari-led government and the powerful military, whose head has only recently secured a full tenure of three years from a besieged and ineffectual prime minister.

The foreign policy challenge is simple to understand. A foreign office source calls the leaks “perfectly timed” with the renewed debate about Pakistan’s alleged links with Afghanistan’s Taliban. “We had prior knowledge that this was coming, but obviously there was very little we could do to prevent these files from being put on the website,” says a high-ranking official. He also admits that these leaks and the allegations that they contain about the army and ISI support to the Taliban fighting the coalition forces sounded too much like an echo of Afghan President Hamid Karzai’s appeal to the US to take the war against the resistance inside Pakistani territory, where he thinks all the sanctuaries are.

“Karzai’s outburst came as quite a surprise for us because only a few days earlier, he made that statement in which he was all praise for the cooperation that he was getting from Pakistan in stabilising Afghanistan. And this he said at the Kabul conference,” said a visibly irritated official. However, he declined to comment on the other sweetly timed statements from British Prime Minister David Cameron, US Secretary of State Hillary Clinton and a string of military officials from Washington — all of whom had the same script, with varied formulations.

This raises a fundamental question about the purpose of the leaks, which incidentally are as much about Islamabad’s alleged role in fuelling insurgency in its neighbourhood as they are about excessive collateral damage in ISAF operations. These files also detail a deepening sense of despondency and lack of direction among the coalition forces.

The hardline view in the country’s military circles is that this is all part of the plot that has been in gestation for a long time and which is now being delivered in full at a critical time in Pakistan’s history. These sources maintain that one reason why General Ashfaq Parvez Kayani had decided to accept the three-year extension was the sense that the country is faced with a formidable external challenge, and Wikileaks represented just one facet of it. The challenge, according to these sources, is that Pakistan could be pushed against the wall on the issue of expanding its operations against internal groups, including Lashkar-e-Taiba, which is now in exceptional focus vis-a-vis London, Washington and Delhi.

“In case we delay action, they (the US and UK) might threaten strikes or even sanctions. All this would be meant to further isolate the country and weaken it internally. Once Pakistan is put in a situation similar to Iran’s, these powers could enlarge their agenda to include denuclearising the country,” says an army official.

That is perhaps reading too much into the leaks, but even those who are dismissive of an alarmist view do concede that this is an extreme pressure tactic, in part to divert attention from the real issue in Afghanistan, the losing battle against Taliban resistance, and in part to force Pakistan not to overplay its hand in shaping Afghanistan’s future. 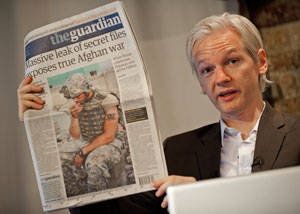 That may be so, but the problem is that the revelations that have emerged from Wikileaks also enjoy immense credibility among the ruling coalition. Any number of People’s Party ministers privately set a lot of store by the content of the files. They say that this only confirms their suspicions that the country’s formidable establishment is running its own foreign and defence policy. They argue that their government would have been in a much stronger position to rebut the allegations of the British prime minister had “our own courtyard been squeaky clean.” Such private murmurings indicate what has become the biggest threat to a stable internal political situation. Sources close to the army and the ISI believe that the present rulers, particularly those close to President Zardari, are in on Washington-led efforts to put pressure on these two institutions and if an opportunity were to present itself, even have them placed under international sanctions.

The origins of this suspicion lie in the earlier thwarted attempts by the government to place the ISI under the control of the interior ministry, and then later other instances such as the government’s blanket approval of the Kerry-Lugar-Berman Bill, which preconditioned $1.5 billion annual aid to good behaviour by the ISI and the army towards civilian control and authority.

These suspicions have now hardened to become a full-fledged thesis that pervades almost all important sections of the establishment. Against this backdrop, Wikileaks can only expand the yawning divide between the civilian and the military set-ups, undermining even the functional cooperation between them. The army wants the government to defend state institutions against violent international attacks and not gloat over the drubbing they (the army) are receiving. The government wants the army to submit to civilian control first before it makes this demand. Therein lies the seed of explosive domestic trouble — the real damage done by Wikileaks.