‘The Inclination,’ featuring works by Shargeel Zafar and Laiq Qureshi, opened at the ArtChowk Gallery last month. Both artists are NCA graduates, the former a resident of Lahore while the latter lives in the Philippines. The artists make an interesting pair — one uses traditional art media, while the other creates digital paintings. By juxtaposing both their works the viewers were given a unique chance to understand the differences and similarities between traditional paintings and digital art.

Shargeel Zafar explains his work as revolving around the inner-feelings and mindset of the common man in society. He explores “the intricacies of the dark and desperate world” through charcoal drawings. In his series, Zafar uses the profile of a man as a symbol for the ordinary man. In some of his work he creates textured surfaces, over which he traces the slight contours of a man’s profile. These rough yet richly textured surfaces convey both a sense of movement and tension giving the impression of the turbulence of life. The dark formless charcoal marks reflect the misery, pain and desperation that one often feels in today’s fast-paced world. 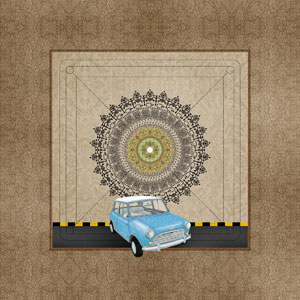 The fact that the man appears alone in the composition signifies his feelings of estrangement from society — growing isolation and alienation — that has resulted from increasing pressures to conform to society. Most people adopt artificial skins to meet societal expectations, thereby suppressing their true identity. A pertinent example is of the pressures faced by men practicing marginal masculinities. Zafar choses the title ‘Termite,’ to portray to the viewer the connection of how certain pressures literally eat away at man’s existence.

His protagonists, shown in isolation, concentrate on self-introspection. Works titled ‘Escape’ and ‘Verdict’ show a charcoal drawn man placed against a stark white background. Far removed from worldly associations, the pure white against the soft grey charcoal brings forth a certain spirituality within man’s struggle. The artist shows his protagonists shutting their eyes to reality, and indulging in their dream for a “peaceful and pure world.”

While Zafar works with more traditional media, Qureshi experiments with digital media. He says that because the electronic media so powerfully defines our lives today, he has taken the liberty to use the medium of digital technology to create art. While this area of culture has become increasingly streamlined in the West, in Pakistan it is still relatively new. 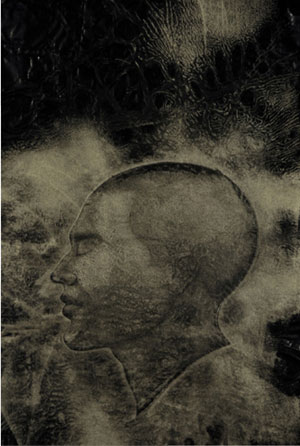 For those unfamiliar with digital art, Qureshi explains that the computer screen becomes his canvas, and the various softwares his tools. All his works are executed on photographic paper. However, the artist does not treat them as prints nor do they have editions. He simply calls them his ‘digital paintings.’

Most of Qureshi’s work is unashamedly graphic. He creates detailed patterns and textures with the aid of the computer, which serves the sole purpose of ornamentation in his paintings where the viewers can completely lose themselves in the intricacies of the painting. He juxtaposes this ornamentation with painterly images which imitate the miniaturist style. The presence of this contrast between digital and painterly shows the versatility of his digital medium. At the artist’s whim his works can take on different forms and appearances. Take for example his painting ‘Division I.’ Exploring the links between religion, faith and the veil, the artist divides the painting in two parts; one where he shows a splotchy painted sky, and the other where he digitally creates a grey wall with white windows. While the former part has a three-dimensional sense of space, the latter section is blatantly two-dimensional. It is not until the viewer looks at the painting up close that he realises that the sky is also printed on the same photographic paper as the grey wall. This ability of computer graphics to create such fantastic illusions opens up new spaces for experimentation which Qureshi fully exploits.

With another refreshing exhibition, ArtChowk is fast establishing itself as a platform for emerging talent, seeking out and encouraging new artists to showcase their work rather than sticking to the mainstream Karachi artists. While many turn up their noses at digital art, the gallery has taken a bold step in encouraging this art form, and engaging art discourse with today’s electronic age.