The Heritage Foundation Pakistan (HFP), in collaboration with the Department of Archaeology and Museums of Khyber Pakhtunkhwa, had conducted a week-long workshop under the auspices of United Nations Educational, Scientific and Cultural Organisation (UNESCO) in 2003 in Peshawar. The main purpose of the workshop was to prepare an inventory with documented details of the cultural treasure trove that Peshawar’s walled city possesses. Archaeological experts consider the walled city a strong candidate for inclusion in UNESCO’s World Heritage List due to its unique landscape and architectural character.

The report at the end of the workshop provided essential information and identified several actions that could contribute to the rejuvenation of the city and rehabilitation of its heritage, along with the revitalisation of its crafts. Published in 2004, the report recommended a few steps for safeguarding and conserving the heritage sites and for the development of urban infrastructure to foster cultural tourism that could ensure the sustainability of the walled city’s sites. The workshop documented 57 buildings, many of which carry historical significance and should be preserved for posterity.

The structures are a blend of Hindu, Mughal and British architectural styles, with heavy usage of brick and wood. Unfortunately, there is no proper maintenance as most of these buildings are being used for commercial purposes and a few are serving as residences. The ongoing militancy in Khyber Pakhtunkhwa and Fata has further accelerated the pace of philistinism, virtually converting what was once the land of the flourishing Gandhara civilisation into a wasteland. 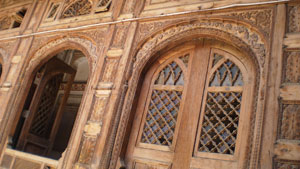 The 150-year-old Sethi House is open to the public.

In the last few decades, Peshawar has witnessed unprecedented destruction of the valuable assets in its walled city. Old historic buildings were razed to the ground, notwithstanding municipality laws against the destruction of old buildings, and were replaced by contemporary structures. The construction of the Shahrah-e-Aaam or the main thoroughfares has also led to the demolition of certain historical sites that fell in the way.

Only two of the 57 historical structures identified by the UNESCO report — the more than 150-year-old Sethi House and the Gorkhutree Complex (built in 1641)— were renovated and are now open to the public. But these are still in a dilapidated state. Among them are the birthplaces of two of India’s most well-known actors, Raj Kapoor and Dilip Kumar. Raj Kapoor’s 10-storey house, once the tallest building in Peshawar, has been reduced to a seven-storey structure. Its highly decorative faÃ§ade is constructed with brick masonry and boasts a variety of arches, mouldings and jharokas that blend features typical of both Hindu and Mughal architecture.

The ‘Kapoor House’, comprising 40 spacious rooms, is rectangular in shape and spread over an area of 4,625 sq. feet. It is located in Dhaki Munawar Shah, near the famous Qissa Khwani Bazaar and in the murky and narrow lane leading to Andar Shehar jewellery market. A wooden slab near the entrance informs visitors that the construction of the house began in 1918 and was completed in 1922. Incidentally, Raj Kapoor’s younger brother Shashi Kapoor, and his sons, Randhir and Rishi, came to Peshawar in 1990 and filmed their old family home. They also took some earth from the compound, something to remember their past family abode by.

The present owners of the historic house, which is located on a steep mound, had demolished its top three storeys some 20 years ago because an earthquake had caused cracks in its upper portion and the residents feared that the house would collapse. The Kapoor residence faces a threat from another source: it is surrounded by commercial properties and is being eyed by prospective land-grabbers and real estate sharks. 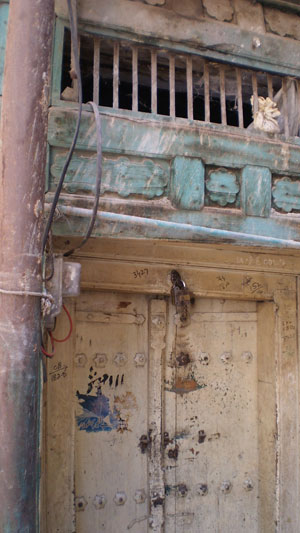 Dilip Kumar’s house, situated at Kuchafeel Khana near Qissa Khwani Bazaar, is an early twentieth century structure and has a highly embellished faÃ§ade. For a long time the place was used to prepare and pack sweat meats. Its present owner Haji Muhammad Israr, a local business tycoon, says that he wants to turn the house into a trust hospital to pay tribute to the legendary actor. Dilip Kumar visited his old family home in 1988, during a trip to Pakistan.

The UNESCO report, in its concluding remarks, states that in view of the rampant destruction and neglect of some fine historic buildings witnessed during the survey, it has become imperative to prepare an inventory of all structures of significance so that they can be provided protection under the law. This is the basic step to preserve the valuable tangible heritage of Peshawar. Yet it is extremely unfortunate that despite all the UN efforts, the residents of Peshawar don’t seem unduly concerned about the preservation of these precious sites.

Dr Ihsan Ali, a renowned archaeologist and former director Archaeology and Museum Department Khyber Pakhtunkhwa told Newsline that Yasmin Lari, chief executive of the Heritage Foundation of Pakistan (HFP), was the moving spirit behind the UNESCO project. “Peshawar is the most ancient city of South Asia, the cycle of history does not break here — it can be traced 2,600 years back to the sixth century B.C. while that of Patna city in India dates back to the early third century B.C.,” says Dr. Ali. “The excavations carried out at Gor Khutree Complex provide clear historical evidence of this fact. So we had recommended that it be included in the World Heritage List,” he added.

Saleh Muhammad, director Archaeology and Museum Department Khyber Pakhtunkhwa, told Newsline that his department had sent recommendations for including Peshawar on the World Heritage List to the relevant quarters but they have their own criteria of selection. Presently only Takht-i-Bahi is on the list. Saleh maintains that efforts should be made to purchase the family homes of the two legendary Indian filmstars from their private owners once the current project of establishing seven museums across Khyber Pakhtunkhwa, which was initiated by the MMA during their tenure, is completed.