t has become something of an annual tradition for Transparency International (TI) to release its Global Corruption Report, for editors and columnists to tut-tut the institutionalised corruption that is pointed out in the report, for guilty governments to ignore its existence and for everyone else to forget all about it before the exercise is repeated the next year.

This year, for some reason, TI has found itself at the centre of a political battle, with its motives called into question and its findings disputed. The firestorm over TI’s Global Corruption report was ignited by the PPP’s Information Secretary Fauzia Wahab who, in a press conference at the Karachi Press Club, flayed the report for being “against our national interests,” mostly because of the timing of its release, coming as it did just a few days before President Asif Zardari was asking the Friends of Pakistan and assorted foreign governments and agencies for aid. She also cast doubt on the organisation itself, claiming that the report was published simultaneously from New York and Islamabad, which she took as proof that TI had base motives. Wahab also wondered aloud why such a report had been published only this year, and not in previous years.

Syed Adil Gilani, chairman of TI, takes issue with all of Wahab’s assertions, and not without some justification. On the timing of the report’s release, he said, “It was written in November 2008 and updated in March 2009 and the schedule of release was decided in April 2009 to be September 23, 2009.“ Gilani also points out that a copy of the report was provided to Finance Minister Shaukat Tareen, who will chair a seminar in Karachi on October 10 to discuss the report.

As for Wahab’s claim that the simultaneous publication of the report from New York and Islamabad was proof of a conspiracy against the Pakistan government, as Gilani correctly notes, the Global Corruption Report is published “from more than 100 countries simultaneously.” This is hardly the evidence from which conspiracies are proven.

While all of Wahab’s remarks against the report are spurious, her belief that the Global Corruption Report was only published in 2009 is the easiest to disprove. In fact, the report has been (with the exception of 2002) been published every year since 2001. All the previous reports can be viewed at TI’s website and even purchased in paperback from online booksellers like Amazon.
Gilani believes that Wahab “most probably did not read the report, and jumped on the news item only.” If this is true, it would explain Wahab’s anger since the news media did a very poor job of reporting the contents of the report. Most newspapers did not seem to realise that TI releases more than one report a year. While the Global Corruption Report was released in September, in June they had also released the National Corruption Perception Survey (NCPS).

The NCPS surveys 5,200 people around the country to gauge their attitudes towards corruption. The respondents are also asked how much money they paid in bribes and whom they paid it to. When these results were tallied, it was found that total corruption, as determined by the people’s responses, had increased to Rs 195 billion from Rs 45 billion in 2002. The Global Corruption Report, meanwhile, concentrates on a single theme every year. In 2009, the focus was on Corruption and the Private Sector. 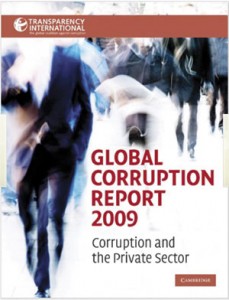 The media somehow conflated these two reports and claimed that the Zardari government was 400% more corrupt than the Musharraf government. Had TI actually said that, the PPP would have had some grounds for anger since, as Gilani says, “TI reports are not made on hearsay. Documented cases are required to be reported.” Since there has been a lot of chatter, but no proof, of the current set-up’s corruption, the 400% claim would have been worthy of criticism had TI actually made it.

Unfortunately, amidst all the political wrangling and misreporting of the reports, there has been no analysis of the reports themselves. Had the PPP read the Global Corruption Report they would have seen that in one instance, a government body — the Competition Commission — had actually been praised for taking strong action against the banking sector. And, although this fell outside TI’s deadline for the report, the Competition Commission also recently levied a record fine on many cement companies for forming an illegal cartel.

The NCPS, meanwhile, is better understood as a study of what people feel about corruption and how it affects their everyday lives, in the form of bribes they have to pay, rather than an investigative study of high-level government corruption. Even here, people’s prejudices have to be taken into account. For example, the judiciary has a lower ranking in a list of the most corrupt institutions in Pakistan than it did in 2006, the last time the survey was carried out. This, Gilani explains, does not necessarily mean that the judiciary is actually less corrupt than it was three years ago. He says, “The NCPS 2009 does have a detailed explanation of why the judiciary’s ranking has improved. It was due to the lawyers’ movement and the restoration of the chief justice.” Similarly, the lower ranking of local governments as compared to 2006 can be explained by the drive against the LG system by the PPP.

Somewhat ironically, the NCPS found that 77% of the respondents felt that the media had played a positive role in combating corruption. It is doubtful, however, if 77% of the media even bothered to read the report in which they were praised by Pakistanis for their diligence and hard work.