Saudi Arabia has had a strong and abiding relationship with the Muslims of South Asia which predates the creation of Pakistan. During the pre-oil era, and especially for the purposes of Hajj, rich rulers of Muslim states in the subcontinent often used to provide funds to the Saudi monarchy. The Nawab of Bahawalpur and the Nizam of Hyderabad are prominent in this connection.

After Pakistan’s emergence, the religious bond between the two was reinforced by Pakistani expertise in various sectors of the Saudi Kingdom. For instance, the most trusted financial confidante of King Faisal was none other than Anwar Ali, head of the Saudi Arabia Monetary Agency. And successive Saudi leaders have mostly utilised the services of Pakistani physicians. The Pakistan-Saudi relationship took on a strategic direction during the days of president Ayub Khan when the first Pakistani military officers were sent as technical experts and advisers to the kingdom. As petro-power strengthened the political and economic clout of Saudi Arabia, the relationship revolved into a political compatibility of interests. Three events were turning points in this regard. 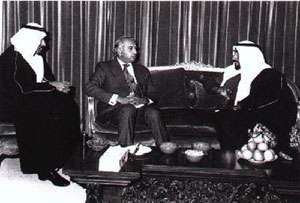 First was the 1974 Lahore Islamic Summit, initiated by Zulfikar Ali Bhutto with the full backing and blessings of King Faisal. In fact, the Pakistan-Saudi alliance had already been forged during the 1973 war when the combination of Saudi money and Pakistan’s military muscle was made available to the Arab allies attacking Israel. Pakistan Air Force pilots flew Syrian planes in combat and shot down two Israeli planes, again the first time that Pakistani military personnel had taken part in combat on behalf of a country other than their own. Bhutto also promised the then Syrian president Hafiz Al-Assad that he would send an armoured brigade to defend Damascus should the need arise. The Lahore Islamic Summit proved to be a culmination of this new emerging balance of power in the Muslim world with the resurgent Arabs fully backed by the will of King Faisal of Saudi Arabia and the vision of Zulfikar Ali Bhutto.

In another first in history, Saudi Arabia’s use of oil as weapon to punish western supporters of Israel meant that the Arabs could use their vital natural resource as a political lever, something which the United States had been using all along but which they never thought others could also do.

It is thus no accident that at the Lahore Islamic Summit, two complementary objectives were sought. Saudi Arabia wanted the recognition of the Palestine Liberation Organisation (PLO) under Yasser Arafat as “the sole legitimate representative of the people of Palestine” and Pakistan wanted that the thorny issue of recognition of Bangladesh should be resolved under the cover of Islamic solidarity, thereby pre-empting any popular backlash within Pakistan against Bhutto.  Both objectives were achieved.

Secondly, while the Saudi factor in Pakistan’s foreign policy was firmly established via the 1974 Lahore Islamic Summit, the Saudi factor in Pakistan’s domestic politics was first injected through the 1977 anti-Bhutto Pakistan National Alliance (PNA) agitation. When Bhutto was facing the worst political crisis of his life, he sought the mediation of Saudi Arabia through the good offices of its able and experienced diplomat, Riaz Al-Khateeb.  He was the Saudi Arabian ambassador in Islamabad and he shuttled between the  PNA and the PPP to bring about a political settlement between the two warring sides. Although his mediation failed and a military coup brought General Zia to power, the Saudi influence on Pakistan was already beginning to be reinforced by the presence of a large community of Pakistani expatriate labour in the kingdom who were fast becoming a major mainstay of Pakistan’s economy

The third major factor which forged the Saudi-Pakistan partnership was the Afghan jihad where again a new triangle emerged: Saudi money plus political and ideological support, American weaponry using Pakistani training and territory to fight a common enemy, namely the ‘Evil Empire’ of the Soviet Union. The CIA pumped in $2.1 billion worth of weapons to train 200,000 Afghan mujahideen and 20,000 Arab volunteers during 1979-1989 and Saudi Arabia provided matching funds for this venture, the biggest collaborative covert operation since World War II. Osama bin Laden, from a prominent Saudi family, also made his entry at the same time and the nexus between the Pakistani and Saudi intelligence services was firmly established. The younger son of King Faisal, Prince Turki Al-Faisal, who remained head of Saudi intelligence from 1997 to 2001, was a frequent visitor to Pakistan those days. And King Faisal’s elder son Prince Mohammed Al-Faisal also developed a stake in Pakistan through his pioneering Islamic banking venture, Dar-ul-Maal Islami (DMI).

During the same period, General Zia, who had promised to “personally defend the Holy Land of Saudi Arabia if the need arises,” accepted a Saudi request for stationing of a Pakistan Army division on Saudi soil. Saudi Arabia had felt insecure in the region after the Islamic revolution in Iran and the Makkah mosque incident, both in 1979, followed by turbulent ties with Yemen and with Iran-Iraq war raging in its vicinity.

During the second tenure of prime minister Nawaz Sharif, two significant visits of Saudi leaders substantively strengthened the bilateral relationship, particularly the personal bond between Nawaz Sharif and the House of Saud. In 1997, Crown Prince Abdullah, who had by then become the real power of the Saudi throne due to the ill-health of King Fahd, came to Pakistan for the Golden Jubilee of Pakistan’s independence Special Islamic Summit in Islamabad. And in 1998, the number three in the Saudi hierarchy, defence minister Prince Sultan, father of the influential Saudi ambassador to the US, Prince Bandar bin Sultan, came for a landmark visit. The highlight of that visit came when Prince Sultan became the first foreign leader to be personally escorted by Pakistan’s prime minister on a visit to the Kahuta nuclear centre, where they were received by Dr A.Q. Khan. In July 1999, when prime minister Sharif went to Washington for his meeting with president Clinton on Kargil, he was received by the Saudi ambassador Prince Bandar at the Dulles Airport. The prince escorted him to Blair House for that eventful meeting, briefing the US president prior to his meeting with the Pakistani PM regarding the latter’s concerns and thinking on the crisis. 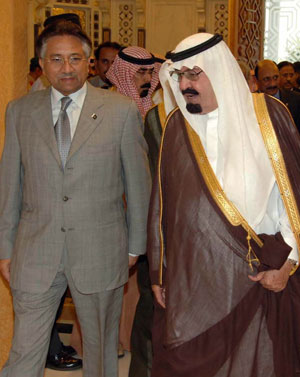 Soon after the October 1999 military coup, which ousted Nawaz Sharif, Clinton cobbled together an informal ‘Arab Consortium,’ comprising Saudi Arabia, UAE and Qatar to try and seek reprieve and release of Sharif. Clinton had a soft corner for Sharif and felt that their last meeting on July 4 at the White House on the Kargil issue had become the catalyst for the coup. And he wanted to ensure that this task was accomplished before the expiry of his term on January 20, 2001. Hence, after the direct intercession of Crown Prince Abdullah with General Musharraf at the September 2000 Qatar Islamic Summit, the outlines of the deal regarding Nawaz Sharif’s exile were settled and on December 10, 2000, just 40 days before president Clinton’s exit from the White House, Sharif was flown to safety in exile in the kingdom in a special Saudi jet.

During the latter period of his rule, General Musharraf also managed to forge a good personal rapport with King Abdullah and he and the Saudi leadership were seen coordinating their positions when the more hawkish elements in the Bush administration were trying to pressure either Pakistan or Saudi Arabia separately, or both, collectively. And in an action replay of December 10, 2000, in August 2008, the Saudi leadership contributed to facilitate, along with Britain and the US, an “honourable exit” for General Musharraf whose bottom line was that he would not be subjected to any legal proceedings for any acts committed while he was in office. This de facto indemnity is the linchpin of the last deal between Pakistani rulers, past and present, and the Anglo-American-Arab combine.

As long as Pakistani politicians behave like political pygmies who are unable to settle disputes on their own, the various foreign factors in Pakistani politics will remain paramount as a painful reminder of how the dignity of Pakistanis is demeaned by their immature leaders.

Related post: Giving Away the Family Silver by Najma Sadeque