News coming out from Pakistan often reads like it was culled from Ripley’s Believe it or Not. Our politicians blunder along, secure in the knowledge that the public is apathetic. In any other country, heads would roll. But not in Pakistan. However, at least there is laughter as a release. When Maila Times, a satirical news website, posted “Rehman Malik: I can confirm that we cannot completely confirm the killing of Baitullah Mehsud but can confirm that this is a non confirmation. Questions?” on their Twitter page the day Baitullah Mehsud was kill
ed in a Predator drone strike in South Waziristan, it helped summarise Malik’s vague statements in a way that perhaps even astute political observers could not have managed.

Maila Times publishes weekly satirical news making fun of cultural stereotypes, with articles such as “Aunty: My Son is Better Than Your Son…Damn Right, He’s Better Than Yours,” and the political characters that regularly invade our TV screens; a recent article stated “Many people in President Zardari’s entourage are still trying to figure out the reason for their presence in Washington last week.” The two-member team who bring out Maila Times, not wanting to reveal their identities, say they met in college in the United States a few years ago, and were inspired by The Onion (a satirical newspaper and website) and a school newspaper The Every Three Weekly, also similar to The Onion. 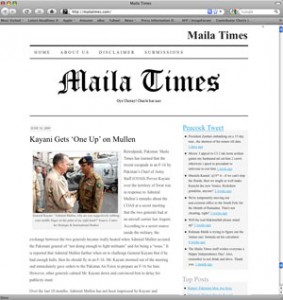 According to the Maila Times’ authors, some of the news articles and headlines on Pakistan’s English news websites “are so ridiculous, they’re just begging to be made fun of.” Whereas mocking cultural stereotypes is relatively easy, as everyone can relate to them, “with political figures, not everyone may agree with what you’re trying to get at. Political stories tend to be more ironic and in a way they point out the stupidity and fallacy of some of our decisions and policies.” With such luminaries as President Zardari and Interior Minister Rehman Malik hard at work helping the nation, it seems the task is easy. But Maila Times reminds one that it’s pretty hard to poke fun at something that’s hilarious to begin with.

However, they’re not the only ones out there making light of an extremely depressing time. Bositive Neuj Bakistan, a group blog boasting an impressive list of 12 authors, all of whom have aliases that would make your head spin and Abdul Rashid Ghazi roll in his grave, include Supreme Mullah Aalloak-uz-amman bin Ghazi, Mullah Nayakuddin Bin Haramuddin and Mullah Lal Mareech Al Mastani, among others, have taken to task the country’s right-wing fundamentalists, and pose as rabid mullahs issuing fatwas and news on their blog, with proclamations like “Theej are bhery khatarnaak timej phor Mullahs. Blij to convene phor Shura in Cave Numper 420.”

The blog’s authors, who also requested anonymity, cite a sense of claustrophobia following the post- 9/11 doom and gloom as their reason for starting the website. “There was, and maybe still is, a lot of whining and rona dhona about the state of the republic. There were laments for ignoring bad news and looking for something, anything positive about the country. At the same time, a lot of us felt and continue to feel claustrophobic living in our current social setup; always made to feel guilty for no reason by family, neighbours, society and our dear mullahs, of course. We are good people, but we’re made to feel like bad Muslims. This restless claustrophobic lot trawled disreputable forums, social networking sites, blogs and Yahoo! groups, seeking solace and escape. Somehow, some of us decided the best way to express ourselves in these dark times was to laugh at ourselves, which is not easy in an overly sensitive society like ours. Hence was born Bositive Neuj Bakistan, which takes the typical stereotypes, prejudices, holy cows and caricatures and rips them apart. Our pseudonyms are modelled after those paragons of Pakistani virtue, love, biraderhood and tolerance — the Mullahs.”

There has been a varied response from the government to satire, whether on television, in print or on the internet. In the ’80s, General Zia-ul-Haq was, like Queen Victoria, not amused, and promptly put a stop to all criticism, real or imagined, in the press. In the ’90s, as a game of political musical chairs ensued in Islamabad, satire was the last thing the rulers were in the mood for. Even with a democratic government in place that maintains its stance of independence for the media, a welcome sign after years of harassment under the PEMRA Ordinance promulgated by the former president, Musharraf, television hosts and satirists say that there have been incidents where they’ve been harassed by political leaders’ supporters, or told to back off.

Maila Times says that, more often that not, people fail to grasp the satirical nature of their work. Some of the comments posted by readers on the blog are a testament to this. On the other hand, Murtaza Chaudhry, one of the hosts of Aaj TV’s, The 4Man Show, feels the audience has been extremely receptive to satire. “During the Musharraf era, there were a lot of people in the government who were open-minded, especially about satire. We used to initially do the show without changing the politicians’ names, quote them directly and they wouldn’t be offended. But we’ve been told indirectly that there are some politicians who don’t like the show, and people like Javed Miandad, Kamran Khan, Zaid Hamid and Imran Khan are not happy about their parodies. But, on the whole, politicians have learned to become tolerant.” 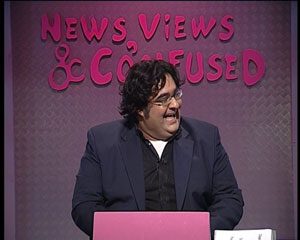 According to Fasi Zaka, columnist and host of the satirical news show on Aaj TV, News, Views and Confused, “Satire, on occasion, seeks to make valid points and since it can be based entirely on the real actions of the subject, it can have more bite. People misconstrue this sometimes, since it is not gag-based humour, and therefore is taken more seriously and painted as a malicious attempt to defame someone. But the more they are exposed to satire, the more they begin to stomach it.”

Chaudhry says that when they started the show Live with Khalid Butt, where they interview politicians live on television, many were reluctant to appear. The tongue-in-cheek interviews combine both serious and rather trivial questions; the host recently asked ARY host Jasmeen Manzoor why she was such a huge Musharraf supporter, and asked the PPP spokeswoman Fauzia Wahab if it was true that she knitted during the National Assembly’s session breaks. “We’ve asked Marvi Memon to come on the show, for instance, and she refused.” But other politicians, notably the colourful Sheikh Rasheed Ahmed from the Awami Muslim League, have featured as guests, and have been comfortable with the line of questioning from the show’s host.

So does being anonymous guarantee more freedom?

With a Cyber Crime Ordinance being proposed that many cynics suspect will be used against those sending out anti-Zardari and Rehman Malik jokes, one can understand the bloggers’ reluctance to reveal their names, especially in a society that is not known for its tolerance or quick wit.  But, according to Zaka, writing satirically under your own name forces one to adhere to a higher standard and be free of any agenda. A satirist needs to be an equal opportunity offender, otherwise he becomes an ideologue.” According to Bositive Neuj Bakistan, “With our prevalent extra-masculine internet culture, there is also a danger of some nut taking offence at our posts and doing something crazy. We are free to write what we truly feel without anyone judging us. It liberates us from our shells and makes us secure.”

Maila Times feel that anonymity guarantees that their parents don’t disown them. It also helps because in Pakistan perception is critical. “Pakistanis have this tendency to question our patriotism, ethnic connections and political discourse, simply because we’re currently not in Pakistan. So if people don’t know where/who we are, that helps; that way our readers can’t connect our personal lives to our stories.” Despite being anonymous, Maila Times admits it was worried that politicians would be none too pleased with their endeavour. “Before we went online, we contacted several prominent journalists in Pakistan to see if they thought that it would be ‘safe’ for us to do it. They all gave us the green light.”

When it comes to freedom of speech, or rather freedom to satirise, Chaudhry says that when The 4Man Showfirst began, the channel used to keep a watchful eye on them, but as the show’s brand registered with viewers and its popularity grew, they gave the team a free hand. “We have a lot of support and freedom from them [Aaj TV]. Initially, if they used to tell us not to mention someone or something, we’d fight tooth and nail to do it. We wanted to do it our way or not have a show.”

Despite writing from behind the comfortable veil of anonymity or appearing in glorious technicolour on TV, Pakistanis are turning to the ultimate weapon of the oppressed: comedy. Whether it’s on the internet or on your TV screens, the beleaguered nation finally has a chance to forget their worries for a moment, and just laugh.