It was not until last year that the global land grab story finally broke. GRAIN, the Barcelona-based international NGO, identified over 100 land deals scattered around the world. Over the past five years, foreign investors, mainly from the West and the oil-rich Middle Eastern states, have been inconspicuously buying up millions of acres of farmland from countries in Asia, Africa and South America.

Governments and state corporations are not alone in seeking vast farmlands overseas. Investment and hedge funds, agri-business corporations, and even automobile manufacturers seeking to ensure biofuels for their new vehicle models are involved. Earlier this year, some 200 representatives from this motley group met in New York to discuss their agricultural investments.

The UN’s Food and Agriculture Organisation (FAO) reported the purchase or lease of 6.2 million acres between 2004-2009 in five African countries. The International Food and Policy Research Institute (IFPRI) found that between 2006 and mid-2009, 37-49 million acres were taken over or were in the process of being acquired. It wasn’t just happening in Pakistan. The common denominator between all the countries offering their land for sale and the sovereignty that goes with it, is ostensibly a weak or non-existent democracy.

The IFPRI study, “Land Grabbing by Foreign Investors in Developing Countries,” estimated that 15 to 20 million hectares have been acquired or are in the process of being sold off — equivalent to about a quarter of all the farmland in Europe. In the past 18 months, over 33 million hectares — about the size of Germany — of prime farmland in dozens of developing countries have been or are being acquired. China, South Korea and the Gulf states, and even India, are investing $20-30 billion in land, mainly in Africa. The Guardian recently reported that “India has lent money to 80 companies to buy 350,000 hectares in Africa.” A Tamil-Malaysian oilseed producer, Ramakrishna Karuturi, has acquired almost 1.5 million acres of land in Argentina for production of oilseeds. A new UNCTAD (UN Conference on Trade and Development) report named Karuturi Global Ltd, which grows roses, not food, as one of the top 25 agri-transnational corporations in the world. An IFPRI report says Karuturi owns over 740,000 acres. Karuturi himself boasted to the Times of India that he was the largest landbank holder in the world. India has also set up agricultural projects in Brazil. 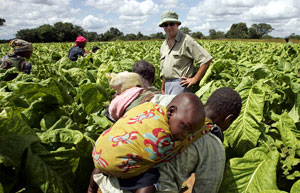 It was after the crash in the stock market that money speculators began to look for something concrete that had intrinsic value it could never lose. They found it in farmland. According to the International Institute for Environment and Development, London, the Netherlands’ Rabobank, one of the world’s biggest banks, is one of the main financiers of such deals.

According to Rabobank’s own report, over 90 funds are currently investing in agriculture not only in Africa and South America, but also in Russia and Ukraine. They include leading investment firms such as Morgan Stanley and Goldman Sachs, which have moved into large-scale livestock farming in China, and other giants like Blackstone (USA), Louis Dreyfus (Netherlands) and Deutschebank (Germany).

Troublingly, a quarter of these new investments are for biofuel plantations. Biofuel was a major cause of the food crisis last year, when millions of previously food-producing acres switched over to growing biofuel crops instead — an exercise that costs more than it gives back.

Related post: Giving Away the Family Silver by Najma Sadeque