Preparations are afoot for launching a full-scale military action against the Taliban militants in South Waziristan, but the timeline for undertaking the mission is not known. It could happen in the coming weeks, as a delay would then push the operation date beyond the winter.

Military operations, including both air and ground offensives, against the late Baitullah Mehsud’s group in the part of South Waziristan inhabited by the Mehsud tribe, were long expected. But one factor or the other delayed the decision to send troops into the mountainous Mehsud tribal territory to clear some of the strategic areas of militants and then hold the ground.

One reason for the delay was the preoccupation of the security forces in other war theatres, particularly in the vast Malakand division where two divisions of Pakistan Army troops were deployed against the Maulana Fazlullah-led Swat Taliban and their allies not only in their Swat stronghold but also in neighbouring Buner, Shangla, Upper Dir and Lower Dir districts, and the Malakand Agency. Military operations in the Malakand region have scored successes against the beleaguered militants who, according to Maulana Fazlullah’s own admission, are weak and “in a state of illness.” But unlike the ruling politicians who are already claiming victory, the military authorities are reluctant to say so. Pakistan Army Chief General Ashfaq Parvez Kayani and some of his commanders reportedly believe it is premature to declare victory as all of Swat is not yet fully stable and some Taliban commanders are still at large.

In fact, the military suffered more than the anticipated casualties by losing 360 soldiers, including an unusually high number of 60 officers in the Malakand operations. This proved that the military action in such difficult mountainous terrain against battle-hardened and committed fighters waging guerilla war can be a costly affair. If Swat was so difficult to regain from the clutches of the militants, one can imagine the cost of trying to wrest control of Waziristan, where the Pakistani Taliban first emerged in 2003, and went on to entrench their positions with help from Al-Qaeda-linked foreign fighters. 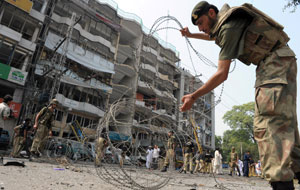 The security forces are also trying to consolidate their positions after pushing out the militants from some of their strongholds in Bajaur and Mohmand. Military action is also underway in Khyber Agency’s Bara area to diminish the strength of the non-Taliban militant group led by Mangal Bagh. Jet fighters and gunship helicopters, and long-range artillery guns are being used to target militant positions in the Frontier regions of Darra Adamkhel and Janikhel-Bakkakhel as well as in the tribal agencies of Orakzai, South Waziristan and North Waziristan. In districts adjoining the tribal areas, searches and blockades along with curfews are now a common occurrence as the law-enforcement agencies go about the task of netting suspected militants and would-be suicide bombers and seizing arms. Every tactic is being used to make life difficult for the militants. Tribesmen are being mobilised in the form of lashkars to take on the militants, the suspects and their supporters. Occasionally, even innocent people get punished. Militants’ houses are demolished, Afghan refugees and peshimams who preach jihad are expelled and pro-government people are strengthened through cash payments, supply of weapons and sanctioning of development projects in their areas.

It appears that a Swat-like military strategy with certain alterations may be used in South Waziristan as well. This would involve getting the population — most, if not all of it — to shift out of the area to places like Tank and Dera Ismail Khan so that the military is free to attack any target without worrying about civilian casualties. This was a predicament faced by the military in its first two military operations in Swat in 2007 and 2008, as the “collateral damage” was undermining its efforts. A sort of solution to the problem was found before the decisive action by security forces in July 2009 by clearing out most of the population from the Swat valley, Buner and the Maidan and Adinzai tehsils in Lower Dir, and then bombing and shelling the suspected hideouts of the militants at will. Though it created a humanitarian crisis as more than 2.5 million people were displaced and repatriating and rehabilitating them posed huge challenges along with the reconstruction of damaged infrastructure and homes, the government and the military are adamant that this was a price worth paying for defeating the militants and reclaiming control of Swat, Buner and Dir.

In fact, the Mehsud tribespeople have already abandoned their homes and villages in large numbers and those still remaining are preparing to do so. The political administration in South Waziristan recently made announcements on FATA Radio Razmak, operating out of the hillstation of Razmak in North Waziristan, advising the people living in the Makeen area to vacate the area following a rocket attack by the militants on the Pakistan Army camp in Razmak. This led to an exodus from Makeen and its neighbourhood, which are part of the Tehrik-i-Taliban Pakistan (TTP) strongholds in South Waziristan. The evacuated area is now being pounded with artillery guns and bombed to soften it up before the ground forces move in with help from the dissident Taliban and tribesmen belonging to the two anti-Baitullah Mehsud factions called the Abdullah Mehsud and Bhittani groups and led, respectively, by the late Qari Zainuddin’s brother Misbahuddin and Turkistan Bhittani. The secret services were also active in resolving differences between Misbahuddin and Bhittani, the two pro-government warlords who continue to demand their pound of flesh for taking on the TTP, now weakened and in some disarray following Baitullah Mehsud’s death in a US drone attack in South Waziristan on August 5. 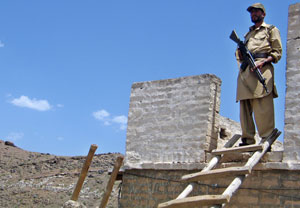 Though preparations for storming the late Baitullah’s strongholds in South Waziristan are complete, the decision on its timing is being delayed. Military officials maintain that if they launched now, the attack would be seen to have taken place on orders from the US soon after President Asif Ali Zardari’s visit to the US. Even otherwise, the American connection would be highlighted by critics because US government officials, ranging from Richard Holbrooke to Admiral Mike Mullen and General Stanley McChrystal, are constantly visiting Pakistan. Also, further delays would reduce the time available to achieve substantial progress on the battlefield due to the onset of winter, which turns harsh and snowy in South Waziristan by early November. South Waziristan, spread over 2,419 square kilometres, is vast and rugged and troops stretched thin in its mountainous terrain would pose logistics and security challenges.

The past three military actions in South Waziristan, one against the Taliban commander Nek Muhammad in the Wana area in January 2004, and the other two targetting Baitullah Mehsud in February 2005 and January 2008 (Operation Zalzala) proved a failure and forced the military and the government to sign unfavourable peace accords with the militants. The military doesn’t want to fail again, hence the delay in sending in troops into a treacherous terrain with which the Mehsud fighters are familiar.

As part of the preparations, the security forces for the last three months have enforced an economic and territorial blockade on the Mehsud tribal territory from all four sides. Though this also affected the general population, the militants faced problems while replenishing stocks and getting reinforcements. However, it seems the militants are still able to get some supplies and there are reports of Taliban and jihadi fighters trying to reach South Waziristan to reinforce the TTP cadres. The actual strength of TTP fighters in the Mehsud area isn’t known, though military officials have variously estimated it to be up to 7,000, including 600-1,000 Uzbek militants aligned to the Islamic Movement of Uzbekistan whose leader, Tahir Yuldashev, was reportedly killed in a US drone strike in South Waziristan in the last week of September. For the TTP it would be a do-or-die battle as the loss of its South Waziristan strongholds could signal its death-knell. It would also be a test of the new TTP leader, Hakimullah Mehsud, and his South Waziristan chapter head Maulana Waliur Rahman, both of whom have agreed to share power after Baitullah Mehsud’s death. They would be up against the formidable two divisions of the Pakistan Army, backed by airpower and the US drones. As was the case in Swat, it appears that the security forces would be able to make steady gains and clear most of the targeted territory but the difficult part would be holding on to the captured area and fending off guerilla-style attacks and suicide bombings.