In a scene from Extras, a television show in which celebrities mocked their public personas, Kate Winslett, playing the role of a nun in Nazi Germany, explains that she accepted the part because she wants to win an Oscar. Holocaust movies, according to her, have “Oscars coming out of their ass.” Four years later, she finally got the coveted award in a Holocaust movie, The Reader.

One suspects awards were not foremost in Quentin Tarantino’s mind when he wrote and directed Inglourious Basterds, his contribution to the Holocaust genre. The Academy has always ignored him — one measly screenwriting award in 15 years — for refusing to play by their rules. So it is no shock that Basterds ignores Holocaust-movie convention and refuses to indulge in the melodramatic, mournful tone of Schindler’s List andThe Pianist. Instead, we get the ultimate revenge flick as vigilante Jews take their revenge on the Nazis.

Undeterred by the solemnity of the topic at hand, Tarantino has retooled the standard World War II epic with an audacious rewriting of history. Spewing forth from the demented director’s mind, we have the Basterds, a group of vicious, righteous Jews led by the gentile Brad Pitt (even Tarantino isn’t audacious enough to make Pitt Jewish), who go behind enemy lines to savagely, even inhumanely, kill every Nazi in sight. Their murder techniques are vintage Tarantino — some of his characters carve swastikas in the faces of their victims. Without giving it away, let’s just say that by the end the Nazis get what’s coming to them. The violence is so brutal that at some point you may wonder what those poor Nazis did to be treated so badly by the Jews.

Tarantino’s WWII revisionism serves a higher purpose than simple blood lust. Cinema, he seems to believe, does not simply reflect history; it makes its own history, an idea the director has taken literally in Basterds. All of Tarantino’s movies are an ode to the trashy cinema he loves, from the Hong Kong influences in Reservoir Dogs to his appropriation of blaxploitation movies in Jackie Brown. Inglourious Basterds borrows its title and inspiration from a vigilante war movie of the same name (Tarantino differentiates between the two by misspelling the title of his movie). The idea of an underground band of brothers exacting revenge has been around since the time of John Wayne. And you can’t get bigger underdogs than Jews during World War II. 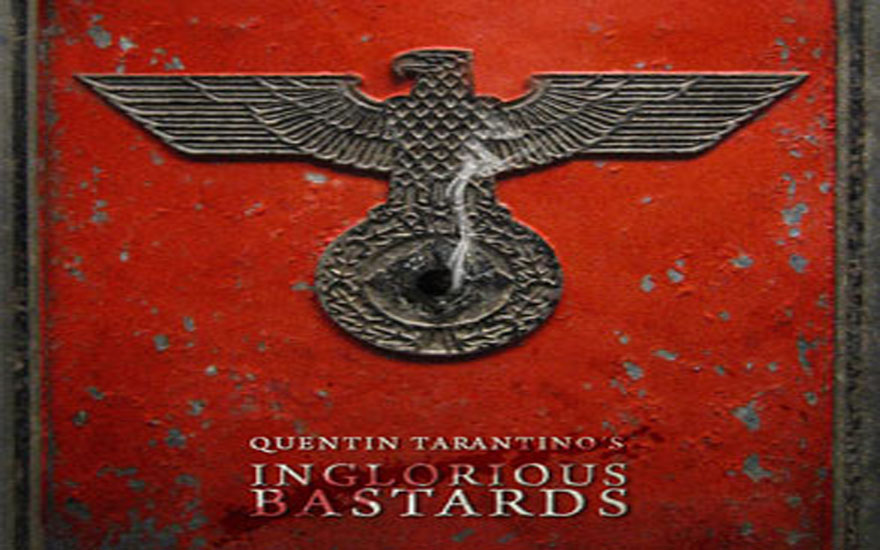 As a director more interested in dialogue than character, Tarantino gives his cast full liberties to ham it up. All the performances are exaggerated and realism isn’t a concern. You have the knife-wielding Pitt, his pencil-thin moustache distracting from his violent tendency. Then there is the baseball-bat-brandishing Eli Roth, nicknamed the “Bear Jew” who has a reputation for savagery that even Hitler knows about and is scared of. Christoph Waltz, the chief Nazi villain in the movie, known as “The Jew Hunter,” delivers the finest of the many great performances on screen. For possibly the first time in movie history, a Nazi is portrayed as suave, cultured and mannered.

Inglourious Basterds has been dismissed by many critics, even as they admire Tarantino’s undoubted genius behind the camera, as a work of insensitivity that lacks a moral seriousness. They are missing the point. The movie is both a homage to and criticism of war movies; it is not meant to be a serious examination of the Holocaust. And if the rapturous reception crowds have given the movie in both Israel and Germany, the grand farce of Inglourious Basterds has caused catharsis in a way previous Holocaust movies never thought possible.