Although the six points submitted by Baloch nationalist leader Sardar Akhtar Mengal in the Supreme Court have no similarity with the six points proposed by late Sheikh Mujibur Rehman, Mengal’s charter of demands is being construed as dangerous in some quarters, since the last one culminated in the dismemberment of Pakistan and the creation of Bangladesh.

The Baloch leader’s recent visit to Islamabad, after a three-year self-imposed exile in Dubai, engendered widespread rumours about his alleged contacts with the military establishment in regard to the next general elections in the country and the ensuing political set-up in Balochistan.

Akhtar Jan Mengal left Pakistan for Dubai in 2008 after his release from Landhi jail, where he spent 16 months on charges of keeping two personnel of the Military Intelligence in illegal detention in Karachi. In the wake of targeted killings of his party leaders and activists, he was advised by his workers and clansmen to leave the country.

While justifying his recent visit to Pakistan, his close aide and party’s Vice President, Sajid Tareen said, “The BNP (M) has become a party in the missing persons’ and province’s deteriorating law and order case filed in the Supreme Court, and the party leader, Sardar Akhtar Jan was required to record his statement.” He added that it was while speaking before the court for half an hour, that Mengal also submitted his six-point formula and offered suggestions regarding the improvement of the law and order situation in the province.

Akhtar Mengal was warmly welcomed in the federal capital by all those parties that oppose the military action/operation and ‘kill and dump’ policy in the province. PML(N) leader, Mian Nawaz Sharif’s meeting with the Sardar at Balochistan House, and the firm position he expressed on Balochistan’s issues, went down well with Baloch parliamentary parties. And Mengal’s meetings with Jamaat-e-Islami leader, Syed Munawwar Hassan, Tehreek-e-Insaf chairman, Imran Khan, and office bearers of the Supreme Court Bar Association helped highlight the Baloch quagmire.

During his brief stay in Islamabad, Akhtar Mengal also interacted with the media, participating in assorted talk shows and indirectly asserting that he is the only Baloch politician among the available lot who can deliver in the given circumstances. The official protocol he was given — although on the direction of the Supreme Court — and the manner in which he was received by the opposition parties and awarded time and space in the media, demonstrated that he is being primed to play an important role in the politics of the province in the wake of the general elections.

Nor everyone was equally receptive to Mengal’s visit, however. The Sardar’s harsh remarks in the media against the military establishment and the court caused some resentment among the country’s military circles and more hawkish lobbies, and his visit created ripples in Baloch political circles as well. The Baloch parliamentary parties either reserved comment on the visit, or declared Akhtar Mengal’s six-point formula as mere rhetoric, aimed at garnering coverage in the media.

“These six points are not new and so far the PML(N) has not officially supported this formula,” said PML(N) provincial minister, Sardar Sanullah Zehri, during a news conference. Sardar Zehri, who also belongs to Khuzdar — Akhtar Mengal’s home district — abandoned his earlier nationalist leanings a couple of years ago, when he joined the PML(N). He is considered to be a prospective candidate for the slot of Balochistan’s chief executive in the next set-up.

Baloch separatist groups, meanwhile, viewed Mengal’s visit against the interests of the ongoing Baloch struggle for independence, saying that hope of a positive initiative by any Pakistani institution is akin to living in a fool’s paradise.

“We all know that no Baloch politician can leave or enter the country without the consent of the military establishment. So Akhtar Mengal’s visit has thrown up a number of questions among the province’s patriotic parties,” said the Khan of Kalat, Mir Suleman Daud, on phone from London where he has been living in self-exile for a few years. He added that due to the Baloch lobbyists living abroad, the human rights abuses in Balochistan have been highlighted on an international level. 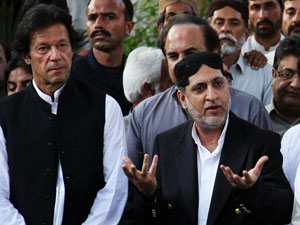 According to him, the US State Department’s apprehensions about the situation in Balochistan, Congressional hearings on human rights violations, a private bill in the US Congress demanding an independent Balochistan, the visit of a UN working group to Balochistan, and now the announcement of a larger UN working group’s visit to the province with an aim to collect more evidence about human rights abuses in Balochistan, are all indicators of how far the freedom struggle has come. “The visit of a Baloch leader [spouting what Mengal has] at a time when the Baloch struggle is close to its goal of independence, will naturally harm the Baloch cause,” he added.

For his part, Mengal claimed in his own defence, that he did “not care what his critics say. My party believes in parliamentary politics, but we do not stop others from taking up arms for Baloch rights.” He maintained that his party had paid a heavy price for the Baloch cause in the shape of the loss of 28 party leaders, including Habib Jalib and Nooruddin Mengal, and that time would prove whether the BNP had struck a deal with the military establishment or maintained its integrity.

Against this backdrop, reliable sources report that the military establishment has also launched efforts to tame Balochistan’s various other nationalist parties and pave the way for a congenial environment so that they take part in the general elections, enter parliament, and isolate extremist/separatist groups. According to these sources, meetings of the Inspector General of the Frontier Corps Balochistan, Major General Obaidullah Khattak, with elderly Baloch nationalist Sardar Attaullah Mengal, and also with his arch rival, Mir Naseer Mengal and his sons, who are loyal to the military establishment, are part of these efforts. However, so far these efforts have not yielded any thaw in the strained relations between Sardar Attaullah and Mir Naseer Mengal, who is currently advisor to the Prime Minister on the PML(Q) quota, or provided any hope for a truce in their ongoing tribal feud.

Khattak’s meeting with Attaullah Mengal and Akhtar Mengal’s Islamabad visit certainly bolster claims by their critics that a political deal is on the anvil between the Mengals and the military establishment. If such a settlement is reached, the military establishment will certainly have succeeded in weakening Baloch militant groups. It is hoped in military circles that, through the influence of Sardar Attaullah, it might even effect a disbandment of an armed group comprising Mengal tribesmen which exists in Khuzdar.

These moves by the military notwithstanding, many political analysts doubt that peaceful general elections are possible in Balochistan if nationalist forces like Akhtar Mengal’s BNP and the National Party headed by Dr. Malik take part. They contend that relatively peaceful elections were last held under the General Pervez Musharraf regime in 2008 only because armed separatist groups refused to participate in the process.

It also remains moot whether Sardar Akhtar Mengal will be able to improve the law and order situation if he becomes, chief minister of the province after the general elections, or prove as much of a lame duck as the sitting chief minister, Nawab Aslam Raisani. According to reports, Mengal does not have good relations with separatist groups and they have long been engaged in a war of words, allegations and counter-allegations in the media. To expect Akhtar Mengal to tame separatist groups and bring in the people fighting against the armed forces in the mountains, might be way beyond his ken. However, if the government does succeed in bringing Baloch nationalist forces like the BNP and NP into the political mainstream, that could help improve the province’s law and order situation.

Most of Balochistan’s tribal chieftains and notables, including Nawab Aslam Raisani, chief of Sarawan, Sardar Sanaullah Zahri, chief of Jhalawan, and Governor, Nawab Zulfiqar Magsi, attended the tribal jirga held under the Khan of Kalat, Mir Suleman Daud, in 2006. After obtaining full consensus, the jirga decided to approach the International Court of Justice for the restoration of Kalat State in light of the instrument of accession reached between the then ruler of the princely state of Kalat, Mir Ahmad Yar Khan, and Quaid-e-Azam Mohammad Ali Jinnah. While the Khan of Kalat and Sardar Akhtar Mengal subsequently left the country to live in self-exile, the majority of other tribal chieftains took part in the 2008 elections and joined the government, serving their own and the establishment’s interests.