Former President General Pervez Musharraf continues to invite attention five years after stepping down from Pakistan’s helm of affairs. Even while critics continue to accuse him of everything from having hijacked the democratic process, to the murders of Benazir Bhutto and Akbar Bugti, and others contend he is now “irrelevant” in the country’s political sphere, the general is increasingly being asked to air his views on a myriad talk shows on the local electronic media. He is even more active on the international lecture circuit — where he said to be one of the highest paid and most in-demand speakers. And neither assassination attempts nor public condemnation seem to have prompted him to hang up his boots.

The Dubai-London based General recently launched his own political party — the All Pakistan Muslim League — and is, by all accounts, now readying himself to revisit Pakistan’s political arena in his new avatar as a democrat.

Syed Amjad: What in your view is Pakistan’s biggest problem today, and how would you tackle it?

We have two major problems to tackle:

1. A failing economy. We have to revive it and put it on a high growth track. The economy forms the basis of all development of the state and welfare of the people.

2.Terrorism, extremism and law and order are other serious menaces that we need to tackle.

As to how I would tackle each, in the case of the first, I believe the deficit in the budget has to be reduced. This can only be done by reducing our own expenses, on things like debt servicing, establishment/government costs and subsidies to failing government corporations. Plus, we have to increase earnings from revenues, exports, remittances and foreign direct investment.

The sources of terrorism are the Pakistani Taliban and some religious groups spreading sectarian hatred. These need to be banned and dealt with by force. The breakdown of law and order is in the form of ethnic strife in Karachi and foreign-aided separatism in Balochistan. These need to be controlled through a combination of force and political means. Extremism in our society is what spawns terrorism. A long-term strategy is needed to tackle it. It is a state of mind which is difficult to identify and deal with directly.

To come to grips with this serious problem we need to stop the misuse of mosques spreading radicalism; control the publication and sale of hate-mongering, radical books, magazines and pamphlets; ban militant organisations; remove any material inciting sectarianism/religious hatred in education syllabi, regulate madrassas and mainstream their students.

Daud Khattak: Would you continue with the same policies vis-Ã -vis the anti-terror war if you become President of Pakistan today?

Yes, I would generally continue with the same policies within Pakistan. However, in the context of Afghanistan, with the 2014 date for the western coalition’s withdrawal nearing, I would focus more on Pakistan’s interests there. We have to prevent the creation of an anti-Pakistan Afghanistan.

Mariam Nabi: What, in your view, was the most significant achievement of your presidential tenure which continues to positively impact the economical/political situation in Pakistan?

I provided succour to the common man by reducing poverty substantially and generating massive employment, thereby improving the people’s quality of life. Simultaneously, my policies led to the expansion of the middle class — which is the backbone of society. This inspired confidence among people and gave Pakistanis pride in their country.

It is the economic upsurge that was achieved which still continues to sustain the country, in spite of all the misgovernance. But that too is now dissipating.

Muhammad Hassan Abbasi: In your opinion, what lead to your downfall — Benazir Bhutto’s assassination, the lawyers’ movement or the Lal Masjid Operation? Secondly, if Benazir Bhutto had not been assassinated and won the 2007 elections, do you think you would have been allowed to remain in power with her as Prime Minister? Lastly, which political parties would you form an alliance with in the 2013 elections?

It was Benazir’s assassination and the lawyers movement, which was thoroughly politicised, that led to my departure.

And had Benazir lived, possibly yes — I may have continued as President — although there was no such formal understanding. As to alliances, I would consider them with any like-minded party, which has not been tested and failed in the past.

Ali Manzar: Couldn’t the clerics at Lal Masjid have been arrested rather than undertaking a full-blooded attack against the facility?

No, this was not at all possible. The roughly 100 people who were left in the mosque when the operation was initiated were not clerics, as you say. They were terrorists, armed to the teeth, and also had grenades and explosive suicide belts. They were intent on fighting to the end, in spite of all possible efforts that were made to get them to surrender.

Mehreen Khan: It is widely felt that your power stemmed from your position as COAS, and that you are now relatively irrelevant vis-Ã -vis Pakistan’s politics. Why then have you launched your own political party and what is your support base?

You are sadly mistaken in the notion that I am irrelevant to Pakistan’s politics. Maybe that is your wish, but not the ground reality. My support base is quite wide, but dispersed. It lies within the ranks of the common man, the youth, women and minorities of Pakistan, who are suffering and yearning for the past. I have to concentrate on them.

Mir Usama Mazhar: In your long tenure of an aid-based economy, why were Pakistan’s policies focused on the short-term?

I am afraid either you do not understand the economy or you do not know the facts and figures, or you are purposely distorting facts. The economy in my time was not aid-based at all. We had bid farewell to the IMF and even refused their approved last tranche of $290 million. We successfully reduced Pakistan’s debt ratio from an unhealthy 102%, to a very healthy 52% of the GDP. Our policies were based on a long-term strategy of poverty alleviation, employment generation, expanding the middle class and enhancing social and economic growth.

Meher Khanum: What are your views on Asif Zardari, Nawaz Sharif and Imran Khan?

I would like to reserve my comments on individuals. All that I would like to say is that I judge them through my motto of ‘Pakistan First.’ Anyone who does good for Pakistan is high in my estimation.

Imdad Gohar: Which party do you believe is likely to form the next government?

Too early to say. People are yearning for change. 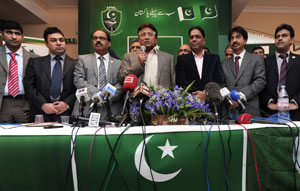 Aman Faruqui: How would you have dealt with the protestors of 21st September?

I fully support the protests against the blasphemous film. However, I strongly oppose the loss of life and property caused. Damaging yourself is senseless.

Maheen Ibrahim: Considering your history with the judiciary, what do you think about the current stand-off between the judiciary and the government?

It is terrible for Pakistan that the three pillars of state (judiciary, legislature and executive) are in disharmony with each other.

Muhammad Hassan: How could you say that you did not know that the judges were under virtual house arrest post 3/11?

They were not under house arrest.

Shamim Alvi: Do you agree that the monolithic nature of the Pakistan army has changed and the jihadist element has made significant inroads in the lower cadres of the armed forces?

Over the years a social change has occurred in the army. Officers now are drawn from the middle and lower-middle class. They, therefore are affected by the social ethos of their upbringing. But after joining the army they come under its strict discipline. They follow the collective will of the army and the diktat of their commanders. Nobody follows any independent line of thought.

(Related Article: Jihadis in the Ranks)

Zuleikha Sibtain: Do you agree that the army has lost its way — from being a highly revered professional institution, it is now increasingly seen as a corrupt commercial enterprise…

Yes, I concede that the army has lost some of its standing and reputation, but the common man still has respect for it. Its being seen as a corrupt, commercial enterprise is totally misplaced, and unfortunately maliciously creative. Such perceptions are far from the truth.

Hassan Shafiq: How do you respond to allegations of involvement in Benazir Bhutto’s assassination?

Irfan Mohammed: You have been cited as a key figure in the FIR lodged by Akbar Bugti’s sons in the Bugti murder case. How do you respond?

These charges are totally politically motivated. The President does not run government. I had nothing to do with the incident. Moreover, it is a fallacy to say that Bugti was murdered by anyone. He committed suicide, or his own men with him either activated explosives, or fired a rocket launcher which resulted in the collapse of the cave they were in. Four officers also got buried in the cave — and for your information, the officers would never have led the operation if the intent was to kill. Also, officers do not carry rocket launchers.

Yousuf Nazar: Why was Qari Saifullah Akhtar, who was on the wanted list, arrested from UAE in August 2004, released in May 2007?

This is the first time I am hearing this name.

Syed Ali Raza: My question to you is, how come neither the army nor the government held any inquiry against your decisions on issues such as the war on terror, missing persons, Akbar Bugti, Lal Masjid, May 8 and November’s emergency before you left Pakistan?

Ask them yourself. If you ask me, let me tell you that the President has no responsibility for any one of these issues in a parliamentary system of government.

Sahib Toor: The jihadis are baying for your blood, the Baloch see you as enemy number 1, and assorted political parties — with the PML-N in the lead — view you as their nemesis. Aren’t you deterred by all of this?

No. I have a conviction in ‘Pakistan First,’ and I strongly believe in destiny. Remember: “No risk, no gain.”

This interview was originally published in the October issue of Newsline.