At Koel Gallery’s two-person show The Land Escapes, Taqi Shaheen and Aamir Habib’s politically charged works seem to be in conversation with each other. And the conversation, it appears, is about the relationship between the city and the citizen.

Shaheen and Habib might be using different mediums or ‘languages,’ but both artists are addressing the history, culture and, in particular, the violence of the places we inhabit. In Shaheen’s work, this commentary comes in the form of the image of a burning bus — an image that is particularly harrowing in light of the recent fire at a garments factory in Karachi.

Shaheen takes photographs of buses engulfed in flames or being hosed down by firemen, and places them in grids to create larger images. In some prints, the mosaic depicts a larger bus, either with passengers sitting on the roof and hanging from the doorway as commonly seen in Pakistan or with the body of the bus reduced to a carcass by a raging fire. Buses in Pakistan, as is evident to anybody familiar with the urban centres of the country, are not only a mode of transportation but also a vehicle for political protest for the common man. In other works, the grid of buses creates an entirely new and unrelated subject, ranging from a portrait of Jinnah to a recreation of one of Sadequain’s masterpieces.

While Shaheen’s work consists entirely of digital C-prints, also known as chromogenic prints, Habib uses a wide range of materials including fibreglass, gold leaf, acrylic and cast iron to sculpt miniature cannons. These cannons are all shown with pillows of smoke erupting from the mouth. Just as the use of photographs of buses to recreate a classic painting is somewhat jarring, it is equally unexpected to see dense, solid materials being used to recreate something as ephemeral as smoke. And upon closer inspection, Habib’s creations take on a sinister quality as human faces become visible amidst the dark whorls of smoke. 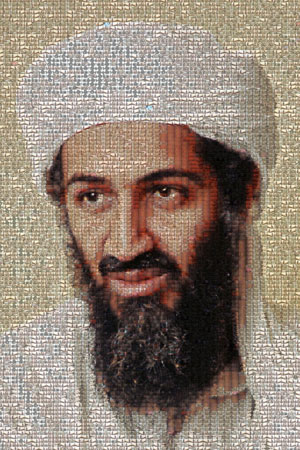 In many exhibitions featuring multiple artists, the topic of the show is kept deliberately vague to allow multiple works to be shown together, whereas at others the theme is entirely superfluous, resulting in a highly disparate collection. There was none of that at The Land Escapes. Here, the works were very carefully placed in relation to each other, thereby both providing the necessary space to absorb each in its entirety as well as allowing the viewer to see how the narrative on land and space is being developed and deconstructed. This can particularly be seen in how Habib’s ‘21 Gun Salute’ — a series of 21 small canons — is lined up on both sides of a narrow corridor in the gallery. On one end of the corridor hangs Shaheen’s portrait of Jinnah, giving the impression that the cannons are official guards ‘saluting’ the founding figure. At the other end, there is another portrait by Shaheen, this time of Osama bin Laden — thereby transforming Habib’s cannons into symbols of the self-styled soldiers who terrorise in the name of God.

Living in a country that is burning, both literally and metaphorically, the fires and fumes depicted in the artists’ works are painfully familiar to the viewer. And the post-modern, pop-art aesthetic of the works, combined with the graphic imagery, not only provides us with a narrative on the urban landscapes we live in, but also sparks a discourse on how we are connected to this very land.