June 4, 2011 turned out to be a life-changing day for me. It was the day I lost a close friend to the ruthless and punishing waves of the sea. My friend Faraz Khan loved the beach, surfed the waves, and was as comfortable in the water as he was on land. Little did anyone — least of all he — know that one day a cruel wave would end his life. I wasn’t there to witness this nightmare, but memories of that day still haunt me as everything following remains crystal clear in my mind. There were others, many of them close to me, who witnessed this event, seeing Faraz drown as they watched helplessly. I know that, unwarranted as it may be, they live with the guilt of not being able to do anything to this day. Adding to this is their overwhelming anger towards the authorities whose sins of omission cost our friend his life.

An efficient and skilled lifeguard rescue relief service could have saved Faraz. But on duty that day was a lifeguard, uniform et al, who not only refused to even attempt to save the drowning boy since he himself confessed, quite unabashedly, that he “did not know how to swim” but added insult to injury by saying to onlookers pleading Faraz’s case, “give up, he’s gone now.” This, while my friend was visible in the water, struggling, but still alive.

As my friends continued to beg the lifeguard for some sort of equipment or apparatus that could be used to help Faraz, the lifeguard finally headed out, ostensibly to do the needful. He returned four hours later, carrying a wooden plank. By then Faraz was actually gone and I had lost my friend to the waves.

This was a drowning so close to home and heart that suddenly I had a dozen questions begging answers. Over the years one has read numerous accounts of picnickers drowning at the beach. So where are the emergency services? While PALS (Pakistan Aquatic Life Saving) proudly states that its lifeguards are highly trained and well-equipped to handle any sort of emergency, the PALS lifeguard’s actions that day put paid to all their claims. And given the statistics, other government and private companies purporting to provide emergency relief services at the beach also seem equally inefficient, if not virtually non-existent. 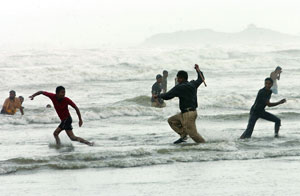 On the first day of last Eid, nine-year-old Shakeeb Khan was swept away by a wave while he was playing in the water with his family. The boy’s uncle later told various media outlets that when Shakeeb was washed away he could be seen floating in the water for quite a while, and he was still alive. However, despite the alarms raised by the family, lifeguards only arrived at the location 15 minutes later, but did not swim out right away. Finally, when they did go in and managed to get him out of he water, the boy was still breathing, but passed away 20 minutes into his treatment at a local hospital.

According to Dawn, an official at the Civil Hospital disclosed that around 12 other people had also drowned at Karachi’s beaches over the three-day Eid holidays, and none of them received any help from any rescue service. According to another television report, on September 1, a family of 13 had gone for an outing to Hawkesbay. Three children of that family were swept away by a wave; all three lost their lives. Witnesses disclosed that no measures were taken to save them.

Recently, I decided to find out for myself: what, if any, life-saving facilities such as, lifeguards, etc were available at local beaches? A friend and I went to Hawkesbay beach, commonly flooded with picnickers. That day, some young boys had gone deep into the water, although it was high tide and huge waves slammed across the shore. There was no one to keep a check, no presence of any type of authority monitoring events. When we entered the Hawkesbay area, a big building met our view with a board located outside that read in fading paint: ‘Life Guard Emergency Services Centre.’ The building seemed derelict and empty. As we patrolled the several kilometre-long beach, not a single lifeguard appeared and not one rescue service boat was visible to deal with any type of emergency situation. Later, I was informed by some local hut-keepers that four people had drowned while I was present at the beach that day. Subsequently, I learnt that, in fact, the total casualties that day numbered seven. 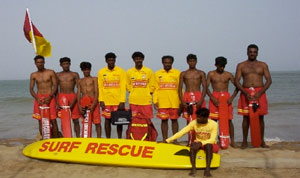 PALS claims to provide free public safety along the beaches of Karachi. Over 175 PALS lifeguards have been trained by Surf Life Saving New Zealand, and are said to patrol over 40 km of Karachi’s public beaches. PALS claims to have reduced the yearly drowning rates from 250 per year to near zero today. In June 2012, Aman Foundation, a non-profit volunteer organisation also started their own lifeguard services, with the goal of providing security to the two million annual beach-goers of Karachi and provide employment opportunities for young men belonging to the low-income coastal communities. The two groups eventually got together and started the AMANPALS rescue service. The lifeguards were selected by PALS and then trained by the best in the field, courtesy Surf Life Saving, New Zealand and Surf Life Saving, Australia. The question is: where are these lifeguards? Despite PALS’ claims that drowning deaths have been dramatically reduced through its efforts, incidents of people losing their lives due to drowning are reported almost every day.

On July 8 Mairaj Khan, the station officer at the local police’s Emergency Response Centre, Hawkesbay, gave a statement to Dawn. According to him, “they [the lifeguards] are not very well-equipped to save lives but they give their best and are sincere to their jobs.” If absence from the scene is construed as ‘sincerity’, then certainly they do a great job. The Dawn report also stated that the centre does not have any 4Ã—4 vehicles or back-up to race to a rescue operation, nor do they have any jet skis to ride the waves in order to reach a drowning person. Moreover, they do not even have any type of life jackets. According to Khan, the Centre had five inflatable boats, but they were destroyed in the 2005 floods. So from 2005 to 2012 — in seven long years — the Emergency Response Centre has been unable to even replace the few boats they had, too meager to begin with for the size of the city’s 64-kilometre-long coastal belt. Clearly, the provision of safety for beach-goers — beaches being one of the few sources of entertainment for those with limited resources — is low on the government’s priority list if there at all or, indeed, on the list of any governments, past and present. 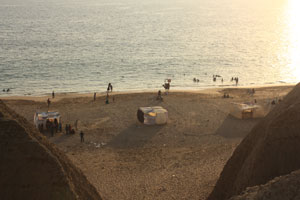 While visiting the Clifton beach, where the waves are much calmer than at Hawkesbay and the French Beach, I spoke to an officer at the Emergency Response Centre there. As we stood talking, we could see a lot of activity before us. There were hundreds of people, families on picnics young boys selling ‘channas’ ‘papri’ and tea, horses and camels with riders and their keepers looking for more business. Amid this crowd and all this bustle one thing was conspicuous by its absence: the presence of a single lifeguard. When asked why no lifeguard could be seen, the officer remarked that lifeguards do show up for duty, but there is no strict monitoring of their attendance. He also stated that dealing with unforeseen incidents such as drowning was beyond the ken of the lifeguards since the ratio of beachgoers to lifeguards was hugely disproportionate. He added that disasters such as drowning could really only be handled by the military or the police.

While walking around, I finally came across two lifeguards sitting and having cups of tea. I would have missed them but for the shirts slung on their shoulders which read: ‘lifeguard’. When asked why they were not performing their duty at the beach, they stated without hesitation or any attempt at justification that that they were ‘tired’ and had the right to ‘relax.’ Furthermore they said, the people at the beach did not want them to be there and, in fact, considered them a nuisance. One of them told me that the lifeguards often had to face verbal abuse from many families at the beach and once a woman actually threatened to break his legs if he stopped her small children from going into the water. Also, the lifeguard said many of his colleagues, like himself, were not happy with their salaries, but he refused to disclose the amount they were paid. When I asked whether many lifeguards did indeed not know how to swim, the men answered that many of the lifeguards employed barely even knew the basics of swimming. Meanwhile, while they acknowledged drownings had occurred, neither could remember the last one at Clifton beach.

Another lifeguard from Hawkesbay, currently on vacation, told me that even though Section 144 was imposed, which bans people from swimming at beaches at times such as the monsoons, the lifeguards were often not informed of this, and consequently nor was the public. Another lifeguard informed me that no real authority kept a check on whether the lifeguards were doing their jobs, and added that even the ‘security towers’ placed along the shore did not act as deterrents since many picnickers broke the towers to use the wood they were constructed with to start fires to cook at their barbeques on the beach.

Clearly, for Pakistanis, if you can’t swim, you sink — and anchors of any sort are just not available.