For a country as ethnically and religiously diverse as Pakistan, education can play a crucial role in bringing the society together or tearing it apart. And Pakistan, needless to say, is a country being torn apart. With tensions escalating among all factions of society, and the incidence of sectarian and ethnic violence escalating day by day, there is a need to understand the underlying causes of this increasing intolerance. And this understanding may be reached by analysing the role our education system plays in promoting bigotry and discrimination.

The role of educators is central in determining the world-view of a child; how and what they teach and the curricula they use deeply influence the way children view ethnic and religious diversity. The things taught in school are instrumental in shaping children’s attitudes — they can either learn to appreciate this diversity or view religious minorities with suspicion. Once instilled in early life, such attitudes can prove resistant to change and can contribute to the disintegration of the social fabric of communities.

Last month, the National Commission for Justice and Peace (NCJP) addressed this issue by publishing a content analysis report of the textbooks used in public schools, focusing on hate content against religious minorities. This report, along with another similar research conducted by the U.S. Commission on International and Religious Freedom (USCIRF) in collaboration with the International Center for Religion and Diplomacy (ICRD) in November, 2011, brings to light some startling facts. They reveal that much of the content of textbooks for both primary and secondary schools foster prejudice and intolerance of religious minorities, especially Hindus and Christians. Such intolerant references are not restricted to Islamic studies textbooks; they are found in textbooks of other subjects as well, which are used by all school students, including non-Muslims.

The inclusion of biased and derogatory content in textbooks can be traced back to the late ’70s, under the education policy of General Zia-ul-Haq, which sought to strongly Islamise the curricula. This policy contradicted Article 22 of the Constitution of 1973, which clearly states: “No person attending any educational institution shall be required to receive religious instruction if such instruction relates to a religion other than his own.”

Despite criticism from many different quarters of civil society, it was not until 2006, during the rule of General Musharraf, that efforts were made to revise the national curricula. In theory, these revisions would increase the inclusion of religious minorities in the curricula. However, despite these efforts, in the six years since the revised curricula guidelines were formulated, textbooks comprehensively incorporating these guidelines have not been created. The existing textbooks have been reprinted with minor adjustments but, as the NCJP report points out, much of the problematic content has not been addressed.

According to the USCIRF report, religious minorities are often portrayed as “inferior or second-class citizens who have been granted limited rights and privileges by generous Pakistani Muslims, for which they should be grateful, and to whom religious minorities should be subservient.” The textbooks provide an incomplete picture of religious minorities by omitting important historical facts. For example, the Social Studies textbook for Grade 8 published by the Balochistan Textbook Board says: “Hindus and Sikhs had started [a] massacre in the Muslim settlements in Bharat (the new name of India after partition). In order to protect their lives, property and honour, 12.5 million Muslims started migrating to Pakistan.” While it is true that many Muslims were killed during the Partition riots, the textbook does not mention the treatment of Hindus and Sikhs at the hands of the Muslims, which was equally abominable. 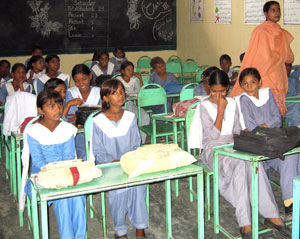 Hindus are portrayed in a particularly negative light, more so because India as a nation is often referred to as ‘Hindu’ and in this way derogatory comments about the Indian state are also directed at Hindus in general. In the Pakistan Studies textbook for Grade 9/10, published by the Khyber Pakhtunkhwa Textbook Board, the following passage can be found:

Most of the pejorative content comes in the form of omissions and distortions of history. The textbooks often downplay significant contributions of some minority groups. For example, despite numerous references to the Indo-Pakistan wars, the textbooks generally omit the mention of decorated war heroes from the Christian community. Additionally, most textbooks exclude references to the Hindu and Buddhist dynasties that once presided over Pakistan and, when they do mention them, tend to focus on their negative aspects only.

Negative depictions of Hindus are also manifested through the framing of religious concepts in a way that promotes the superiority of Islam over Hinduism. In a Social Studies Textbook for Grade 5 published by the Punjab Textbook Board, a line says, “In the Hindu religion the men are divided into different classes by their system of caste and creed, whereas in Islam all the Muslims are equal and are brotherly with one another.” The textbook fails to mention the various sects found within Islam in Pakistan. Moreover, the religious festivals and rituals of non-Muslims are often portrayed as frivolous and meaningless. For example, an Islamic Studies book for grade 5, published by the Sindh Textbook Board, includes a line saying, “People of other religions usually stay busy in useless activities during their religious festivals. There is no concept of God or submission among them.”

However, as the USCIRF report points out, it is important to note that among the negative passages about non-Muslims, there are passages that include either positive or neutral representations. Among the positive passages, the most common theme is the promotion of tolerance within Islam, although it often occurs at the expense of Hinduism and the caste system. For instance, the Social Studies textbook for Grade 5, published by the Punjab Textbook Board, says, “In Hindu religion the women are given a low status, whereas Islam teaches respect of women.”

In many sections which profile important religious leaders, including the Prophet Muhammad (PBUH), Hazrat Umar and Saladin, their kindness and mercy towards non-Muslims is highlighted as a virtue in and of itself. For example, in the Urdu textbook for Grade 6, published by the Punjab Textbook Board, Saladin’s conquest of modern-day Israel includes the line, “Saladin not only let all Christians leave with all their property intact, but also paid for the freedom of several prisoners from his own pocket.” There are also several passages where earlier harmony and cooperation between Muslims and non-Muslims in the subcontinent is recognised. For instance, the Social Studies textbook for Grade 5 by the Punjab Textbook Board says, “Muhammad Bin Qasim respected the Hindu Pandits and they had full freedom to worship in their own ways. Much of the Muslim Governments’ works were handed over to the Hindus, who carried them out nicely.”

Despite these positive passages, which are few and far between, it is clear that there is a need for an immediate revision of the curricula — textbooks which are unbiased in their historical accounts and which promote respect for non-Muslims as equally important citizens of Pakistan. As Peter Jacob, Executive Director of the NCJP, observes, “After religious books, academic curricula are considered the most certified source of information across the world. In the case of Pakistan, it silently damages religious tolerance because people who read such concepts cannot have acceptance for other beliefs.”

Both of these reports recommend that the 2006 curricular reforms should be implemented. They may be imperfect, but they represent a major step towards the elimination of biases against religious minorities in the textbooks. It is also recommended that the course ‘Ethics for Non-Muslims,’ which is a subject offered to non-Muslims as an alternative to Islamic Studies in some schools, should be made compulsory for all students. This course appears to present a comprehensive description of the minority religions of Pakistan, and if this course, or a component of this course, is included in the curriculum, it would effectively dispel many of the inaccuracies and stereotypes found in the current depictions of religious minorities. The reports also emphasised the importance of developing teacher training programmes which focus on the importance of promoting tolerance for diversity. Only by drastically transforming the content taught to Pakistani children all over the country can we hope to work towards a Pakistan which is tolerant and accepting of its religiously diverse population.

This article was originally published in the October issue.