Babar Moghul’s series of pencil drawings Monolith, shown at the VM Gallery earlier this September, have a dream-like, if not in some cases a nightmarish, quality.

Many of the figures in his works are phantom-like with their eyes disfigured or obscured and celestial objects are often found floating in the background. In ‘Death of Imagination,’ a massive head grows in a graveyard with cracks lining the contours of the face and a side of the head transforming into yet another graveyard. In ‘Spell’ a curved wall mysteriously floats mid-air and in ‘Darkened Room’ a nun wearing a white habit and a black snake are placed next to each other, with both their pupils eerily glowing in the shadows. 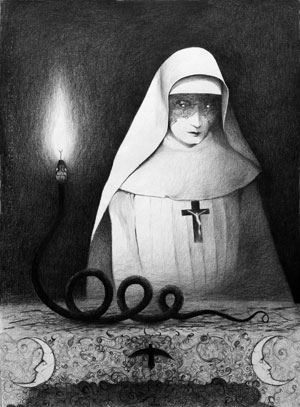 Moghul writes in his artist’s statement that he fills the “spaces of (his) artworks with smoke, mist, weed, fallen masonry, crawling creatures, cracked and cratered surfaces, and other clutter.” The hard “cracked and cratered” surfaces are in stark contrast to the gentle swirls superimposed over the objects, suggesting that they are submerged underwater or surrounded by smoke. And rather than restricting himself to a specific set of images or motifs, it seems that he lets his hands do the talking and allows the drawings to organically take form. This could explain why one drawing depicts a nymph-like creature emerging from the water and another shows stones with strange-markings on them spinning in the air around a peculiar-looking structure.

Some viewers might find the content of his drawings strange or shocking. Others, mainly younger viewers fed on a diet of gothic rock and fantasy novels, might already be familiar with the style of surreal imagery. Moghul himself cites rock music as an inspiration for his earlier works, although he eventually found it restricting and has since then sought other sources of inspiration. But regardless of how one views the content of his work, there is no denying Moghul’s skill in manipulating the humble pencil to create works that are magical and otherworldly.

This review was originally published in the October issue.