Almost a year after its blockbuster lahore rally,

Imran Khan’s Pakistan Tehreek-e-Insaf seems to be sliding down in public perception. With several politicians dumping the party, and an opinion poll showing a significant decrease in the party’s popularity, all is clearly not well in the House That Imran Built.

The PTI leadership is putting up a brave face. “Listen, we’re busy with our party elections so we haven’t really held many jalsas,” says a senior leader who’s been with the party since its founding. “And as for those opportunists who are leaving us,” the leader says, “well, good riddance.”

If the party feels nothing is really wrong and the criticism coming its way is merely a storm in a teacup, its opponents are saying PTI’s artificial rise has come to a halt and its popularity balloon has turned out to be just that — a balloon, that is deflating.

The party has gone through lots of hits and misses since the Lahore rally. The resounding success of the Karachi jalsa followed by an impressive one in Quetta quelled all doubts that PTI was a flash-in-the-pan. In between these mega events, there were numerous solid rallies across the country. In addition to proving the crowd-pulling power of Imran Khan, these events established that PTI had successfully developed a solid support base in all parts of Pakistan. This, in itself, was a huge achievement.

Then the so-called “electables” came knocking. Constituency politicians — smelling the sweet smell of future success — sniffed at the wind and detected it was blowing in Imran Khan’s direction. The same people who used to scoff at Khan now lined up to join him. The ranks of the party began to swell as Khan’s self-named ‘Tsunami’ rolled across the Pakistani landscape.

But there was trouble brewing in paradise. “We thought there would be some adverse reaction to these electables joining us,” admits a veteran party ideologue, “but we didn’t realise how adverse the reaction would be.”

Khan had his explanation ready. And soon the party rank and file began to parrot the line. “It’s the vision of the leader that matters,” went the justification. “Whoever joins, does so after embracing the party ideology.”

That line never gained the kind of traction that the party had hoped for. A natural tension developed between the old and new guard as veterans were elbowed out or nudged aside to make way for the new political high-flyers and their bevy of supporters and assorted hangers-on.

Imran Khan did not change. His words and actions did not change. His rhetoric did not change and his strongly held beliefs did not change. But the complexion of the party began to gradually change. Or at least there was a change in people’s perception about it. Where once PTI looked like an untested, unpolluted and unspoiled organisation sporting innocence and eagerness for change as its biggest advantage, it now began to exude a conventional and traditional aura.

The party was paying the price for minimising its risk factor.

The last few weeks have been devastating for the party of change. First to dent it were a number of high-profile desertions. Electables had come expecting guaranteed tickets from their constituencies. Perhaps they had not realised that Khan was a hard nut to crack. Unused to not getting their way, many calculated now was a good time to jump ship. Some were wooed by other parties, some couldn’t adjust to Khan’s no-nonsense style, while others figured PTI’s graph was falling and therefore did not guarantee success at the polls.

The party which had launched attacks against every other party was now under attack from its own cadre. From an offensive mode, it went into defence. Every desertion brought with it a new set of complaints, grievances and accusations, forcing the leadership to offer explanations and justifications.

In public, Khan appears unfazed. But the party rank and file is clearly rattled. The latest IRI survey confirmed the party’s worst fears: PTI’s popularity had taken a nosedive whereas its arch-foe, PMLN, had gained ground. As the party struggles to fight this rearguard battle, it faces two huge self-manufactured challenges: the visit to Waziristan — which at last count had been vetoed by the concerned authorities — and the looming party elections which can cause new fissures within its cadre. 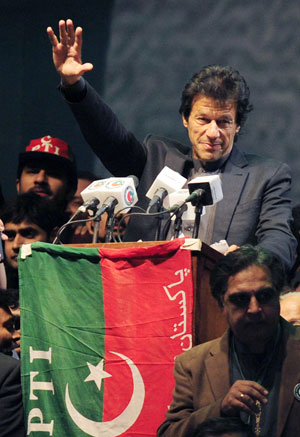 The damage to the party may be less than what is being portrayed, but what matters most at this stage is public perception. For a party and a leader with no political track record and no political achievements to showcase, perception is everything. In fact, it is the perception of Imran Khan as a well-meaning, sincere, honest agent of change that has brought him to the stage that he finds himself on after 15 years of roaming in the political wilderness.

But rumours of PTI’s demise — so to speak — are clearly exaggerated. Khan sells himself as a risk-taker who is not afraid to flow against the tide. Faced with this mounting challenge, he has not wavered or dithered in his words or actions. On issues like boycotting the by-elections, journeying to Waziristan or holding party elections, he has stood his ground despite serious reservations from within the party. A weaker man would have succumbed to pressure.

The last few weeks may have dulled PTI’s shine, but the party still stands apart from other mainstream players in its outlook, agenda and perception of being an agent of change.

If Khan can pull off a successful Waziristan sojourn as well as party elections, he would once again stand vindicated as a leader who did not shy away from taking decisions he believed were the right ones. No other political party has even attempted to hold a rally in Waziristan. None has ever held the kind of transparent elections Khan is planning to organise. It is a revolutionary step in a political arena where political parties are little more than personal fiefdoms led by families who dole out party offices as patronage.

More people may jump off the PTI ship in the coming weeks and months. But this may not matter much if Imran Khan can retain the core image of his party. If the Khan brand survives the latest onslaught, electables entering and exiting the party ,may account for very little. But for this brand to remain pure, Khan will need to auto-correct his course as the final stretch towards elections approaches.

Has the party been hijacked? Probably not. Has it moved away from its original track by recruiting tried and tested politicians? Perhaps a bit. Much will depend on how Khan manages to stem the tide of falling public approval, and convince the voter that he — as the undisputed leader of the party and the bearer of its message of change — has not changed. A majority of those who will vote PTI will vote for Imran Khan. This has always been his biggest strength. And if he succeeds in retaining the people’s trust, he will have his flanks covered.

The voter is watching with bated breath.

This article was originally published in the October issue of Newsline under the headline “Down But Not Out.”