Analysts in Pakistan are now beginning to link the spate of attacks against Chinese nationals in the country to Islamabad’s policy of playing ball with Beijing in its attempt to quell the Islamist movement in the Chinese province of Xinjiang.

“We are now quite certain that foreign militants living in Pakistan and their Pakistani hosts, infuriated with Islamabad’s cooperation with Beijing, are carrying out these attacks,” says a senior intelligence official, requesting not to be named.

Clear evidence supporting this argument was obtained by the authorities in early July when three Chinese nationals working in a three-wheel auto-rickshaw factory at Khazana, a town some eight kilometres from Peshawar, were killed and another seriously wounded in a daredevil attack.

Eyewitness accounts reveal that the militants were in three separate cars. They started firing at the Chinese nationals from two of the cars, while fellow militants in the third car filmed the action. The militants shouted religious slogans as they opened fire.

The film was sent to Chinese authorities earlier this week, apparently by anti-Beijing Uighur extremists, warning them that such attacks would continue against its nationals on Pakistani soil if it did not refrain from pursuing the policy of persecuting Muslims in China.

Earlier, in mid-July, when a suicide bomber rammed into a convoy of police vehicles escorting Chinese technicians through a busy street in Hub, Pakistani officials initially suspected that Baloch insurgents were behind the attacks. The Chinese were unhurt but the massive explosion killed 29 Pakistanis, including seven police officers riding in the van that was attacked.

“We were puzzled because we knew that insurgents who are involved in much of the violence in Balochistan have neither the resources nor the capacity to carry out such a suicide attack. Now we know for sure that it was the handiwork of Islamists linked to Uighur militants, who are trying to settle scores with the Chinese government,” says an official.

Pakistani officials now believe that the latest attacks against Chinese nationals on Pakistani soil were triggered off when an activist belonging to the Eastern Turkestan Islamic Movement (ETIM) was executed in China last month, after being deported from Pakistan.

The ETIM strives for a separate homeland in the Muslim populated Xinjiang province of China. According to some reports, the Chinese government has confiscated the passports of thousands of Muslims in the oil-rich Xinjiang province to prevent them from slipping away to join militants in Pakistan and Afghanistan. There are some indications that the government may bar Chinese Muslims from performing Hajj this year. These reports follow intelligence indicating that the Hui Muslim minority community in central China is financed by extremists in the Middle East.

Finding themselves in hot water in China, some militants have fled the country to seek shelter elsewhere.

Exact figures are not available, but some Pakistani officials suggest that nearly 1,000 Uighur militants from China’s Xinjiang region have made their way to South and North Waziristan.

The Uighur militants are believed to have been closely linked with Osama Bin Laden’s terror brigade, so much so that it was suspected that he might have been sheltered by these militants in Xinjiang province after he was forced out of Afghanistan in 2001. The militants fought alongside the Taliban inside Afghanistan when it came under attack in the wake of 9/11.

Pakistani officials are now trying to investigate if the kidnapping of the eight Chinese, who owned a massage parlour in an upscale neighbourhood of Islamabad, by the self-appointed moral police of Lal Masjid, was also instigated by the militants and their supporters among the local Taliban. 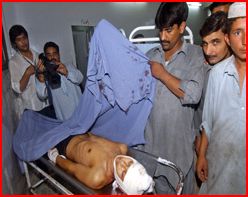 According to one estimate, nearly 5,000 Chinese nationals, including 3,500 engineers and technicians work on various state-run projects in Pakistan. In the wake of the latest violence, many of them, especially the engineers working on various projects in Pakistan, have started leaving the country. Those who have chosen to stay on have restricted their movements. Some have taken to wearing shalwar kameez in an attempt to deflect attention. While westerners had faced deadly attacks in the country in the past, there was a perception that the Chinese were relatively safe. Recent events have drastically altered this perception.

Pakistani officials say that though militants belonging to the Xinjiang province have sought shelter in the lawless tribal zones for decades, never before had they used Pakistani soil to fight their “ideological” battles.

The trouble began when Pakistani officials reportedly rounded up several dozen Chinese Muslims from madrassahs in Pakistan and handed them over to China in 2004. “We heard from Uighur militants in the tribal lands of Pakistan that most of their fellow Muslims were shot dead immediately after they arrived in China,” says Lateef Afridi, a local tribal elder.

After receiving reports that an Al- Qaeda-affiliated militant group had planned to kidnap senior diplomats of a “communist country,” Chinese diplomats in Islamabad requested the Ministry of Foreign Affairs to beef up security around its missions two years ago. Heightened security measures may have helped to prevent attacks on these missions, but in October 2004, two Chinese engineers working on the Gomal Zam dam project were kidnapped from Tank, near the South Waziristan Agency by tribal militants. The kidnapping ended on a tragic note two days later. One of the Chinese hostages was killed; the other was rescued unharmed in a blitzkrieg commando action.

Some Pakistani officials assumed that the kidnapping was meant to embarrass Islamabad, as Beijing was its close ally and major supporter in defence and other projects. Others now suggest the militants kidnapped the engineers because they suspected them to be undercover spies, keeping tabs on Chinese Muslims in the area.

Only last month, China handed over a list of 20 militants belonging to the ETIM, wanted for disruptive activities in Xinjiang province, alleging that they were hiding in Pakistan’s tribal areas. Chinese officials requested the visiting Pakistani delegation, led by Interior Minister Aftab Ahmed Khan Sherpao, to furnish them with detailed information about these terrorists.

The ETIM has been declared a terrorist outfit by Afghanistan, Kyrgyzstan, China and the United States. The US government accuses it of committing over 200 acts of terrorism between 1990 and 2001, resulting in at least 162 deaths and over 440 injuries.

The militants believe that the Chinese government has deployed dozens of spies across Pakistan, under the garb of technicians and engineers, to keep track of the activities of several hundred Uighur extremists hiding in the tribal belt.

Senior counter-terrorism officials say there is a strong likelihood that the local Taliban may have been asked by Al-Qaeda to carry out attacks against the Chinese on Pakistani soil to protect the interests of their fellow Chinese militants who had remained associated with the network.

Pakistani government authorities faced a serious confrontion with tribal militants when they demanded that they expel or hand over militants belonging to Uighur province, including Uzbeks and Chechens, in the wake of the deal signed with them. Recently, the tribal militants renounced the peace deal struck last September.

Pakistan now faces great pressure from its western allies to do more to curb the militancy in the tribal areas. Washington has already questioned President Musharraf’s ability to control the remote tribal areas along the border with Afghanistan, in which, according to US officials, Osama Bin Laden is probably hiding. There is great concern that Al-Qaeda is being allowed to rebuild its organisation in this “safe haven.”

Islamabad’s problems just seem to get worse. Already fighting a virtual war within the country to combat one of the worst threats to its security, it faces opposition not just from local militants but from the international jihadists including Arabs and Uzbeks. Now, to the list of its deadly “enemies,” it must add the reclusive militants belonging to China’s Uighur province.