There is regrettably a deep-rooted and widespread tradition in Pakistan that sees foreign hands and hidden forces in all bad things that happen, and it is understandable why some expatriate Pakistanis can be quite sensitive on this point. Let me state clearly, therefore, that in seeking a debate on whether expatriates should or should not be involved in government and politics (as opposed to the whole spectrum of non-political activities), the intent is not to accuse them of disloyalty, or of being part of any kind of conspiracy. This kind of thinking is reprehensible and should be rejected.

Yet politics involves conferring, negotiating, and exercising authority that imposes on citizens and residents alike a duty to obey upon pain of death, imprisonment, or confiscation of property. For this reason, the right to political activity is not lightly conferred anywhere in the world, and expatriates (“dual citizens” and “permanent residents” abroad) are either denied these rights or they are carefully and strongly regulated in the public interest. This consensus on a best practice in governance is based on the sound argument that public office is a trust in which officers and servants of the government must not only act, but must also be seen to act, in the interest of the people, exclusively, unsullied by any fear, desire, or attachment.

This is why modern countries require incumbents to resign from all private offices (like company directorships) and employment before taking up public office. These attachments are much weaker and involve lesser conflicts of interest, than foreign citizenship or permanent residence. Expatriation, by contrast, is the act of abandoning residence in one country to take up “permanent residence” in another, and in due course, taking a public oath of allegiance to a foreign sovereign, state, or constitution, and renouncing explicitly or implicitly all other allegiances, to become a “dual citizen.” Obviously this creates strong affections, attachments, and entanglements as well as multiple allegiances that compromise the ability to act exclusively in the public interest. Without questioning their good intentions or patriotism therefore it remains legitimate to ask: should expatriates govern?

“I, [name], [swear by Almighty God] [do solemnly and truly declare and affirm] that, on becoming a British citizen, I will be faithful and bear true allegiance to Her Majesty Queen Elizabeth II, her heirs, and successors, according to law.”

In law, one can be “faithful” to more than one subsidiary lord, but can owe “allegiance” to only one master, who has no superior, and “true” faith or allegiance cannot be shared. This follows from the well-established legal maxim that “no man can serve two masters” (the Bible, Matthew 6:24). What is more, every naturalised British citizen swears “to be faithful and bear true allegiance” not to the state or nation, but personally to “Queen Elizabeth II, her heirs, and successors.”

This has important consequences. The Queen is not only the Head of State, and “Head of the Armed Forces,” but is also “Defender of the [Christian] Faith,” among her other roles. In this capacity, she appoints archbishops and bishops, who also take an oath of allegiance to the Queen. In its Articles, the Church of England describes the monarch as “being by God’s Ordinance [shari`ah] … Defender of the Faith and … Supreme Governor of the Church of England.” On coronation, the British sovereign swears to maintain the Church of England. While custom, law, and judicial precedent restrain the British monarch’s multiple roles as head of church, state, and armed forces, this does not alter the fact that even today her position is similar in many ways to that of the “Rightly Guided Caliphs” of early Muslims.

Every naturalised British citizen then swears to be faithful and bear true allegiance to Queen Elizabeth II, personally, in all of her roles. While this may not rest heavily on those engaged in commerce, industry, finance, or philanthropy no one who aspires to political activity, public service or office can afford to be cynical and make light of solemn oaths. Can anyone who swears personal allegiance to the head of the Anglican Church, the British armed forces and the state, serve the people of the Islamic Republic of Pakistan without fear, favour, or demands of competing attachments? More importantly, how can such a person also take an oath to “bear true faith and allegiance to Pakistan” and “preserve the Islamic Ideology” as is required by the constitution, of every high public official?

The position is not materially different in areas of British settlement overseas: Australia and New Zealand, South Africa, Israel, Canada, and the United States of America. In the United States, the current citizenship oath is as follows: 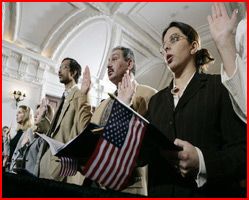 As is obvious, this is a much stronger oath. In effect, a citizen of Pakistan who acquires US citizenship swears to uphold the “five principles” mandated by the US Immigration and Nationality Act of 1953: (i) renounce all foreign allegiances (i.e. his citizenship of Pakistan); (ii) bear allegiance to US constitution and laws, and (iii) support and defend them the against all enemies; and (iv) serve in the US military (in combat or non-combat roles) and (v) civilian government, when required by law. Under US law therefore all citizens renounce their prior citizenship and thus become ineligible under US law for political activity in their home countries (with the sole exception of Israel). In Pakistan, however, initially as a matter of practice, and since 2002 by notification, the government has chosen to ignore this renunciation.

Under the Pakistan Citizenship Act, 1951, dual citizens must renounce one of their citizenship (Sec.14 “Dual citizenship not permitted”). But there are four exemptions, and among them is one for citizens of “the United Kingdom and colonies or of such other country as the federal government may, by notification in the official gazette, specify in this behalf” [Sec.14(3)] In other words, as is typical of our colonial laws, the law itself provides for the federal government to undermine the intent of the law. It is under this delegated power that the federal government over the course of years has condoned and in 2002 has notified a list of 16 countries (USA, Canada, 11 European countries, and 3 Arab countries) that are exempt from the prohibition on dual citizenship. The intent reportedly was to enable expatriates to visit Pakistan without visa, conduct financial transactions, buy, sell, and inherit property, etc, but governments (military and civilian) with weak domestic support have widened the loophole to use expatriates in governing citizens.

By contrast, other nations seek to use their expatriate communities to influence foreign governments. In addition to Israel’s well-known efforts in this area, Mexico follows a policy of “acercamiento” (“getting closer”) to Mexican expatriates, including those who are US citizens living in the United States. Indians are increasingly promoting India’s interests by becoming active in US politics and government. No doubt there are other examples. As a result, there has been an active and continuing debate in the US of how this can be both regulated to protect, and exploited to serve, the interest of the American people.

In the US, long-held views about citizenship and loyalty are changing. In 1957, US Justice Felix Frankfurter, despite being an openly active Zionist, justified his 1957 judgment that “anyone who votes in a foreign election of significance politically in the life of another country shall lose his American citizenship,” by citing with approval the view of the 1906 US Citizenship Board: “No man should be permitted deliberately to place himself in a position where his services may be claimed by more than one government and his allegiance be due to more than one.” More recently, however, Americans have begun to appreciate Machiavelli’s advice that “if one wants to preserve a city that is accustomed to living in freedom, it is more easily held by the means of its own citizens than in any other way.”

In testimony before the US Congress on September 29, 2005, one expert advocated that: “dual citizenship advances U.S. national interests on a global basis… Through dual citizenship the United States now enjoys a direct voice in the politics of other countries… That serves our national interests…” In this, “the example of Mr. Karzai in Afghanistan” was cited and of “a long list of Americans who played critical roles in … Eastern Europe in high government positions, including as President of Lithuania,” as “a very concrete example of how dual citizenship has served our national interest in other systems.” When US Congressman Hayworth introduced a bill that would have penalised dual citizenship, it was suggested that “in the legislation, exemptions could be made for national security reasons. So if there is somebody who is the President of Lithuania and is an American citizen and for some particular reason the State Department wants this, there is the exemption within the Hayworth legislation for this…” (The bill is presently being re-drafted, on a bi-partisan basis, for presentation to the US Congress next year.)

In other words, the proposed legislation can be expected to provide for existing practice in which the US government, on the advice of the State Department, makes suitable arrangements to suspend temporarily or otherwise conceal dual citizenship (or permanent residence) in order to allow foreign nationals to head their government or state, or take up other political office, in the interests of the United States of America. This brings us to the case of foreign permanent residence which, in itself, should not be a bar to domestic political activity; unless, however, the Pakistani permanent resident makes arrangements with the foreign government to restore his permanent residence against a commitment to serve US interests while holding office in Pakistan. In practice, of course, this is likely to be difficult to uncover and creative solutions need to be found.

It seems clear that while everything possible should be done to retain the affections of our expatriates by facilitating their interactions with the home country, they should be encouraged to advance Pakistan’s interests by participating in political activities in their adopted countries, and not in Pakistan. Following international practice, dual citizens should not be eligible for political office, or civil or military service in Pakistan. Everyone should be required to have resided in Pakistan for say five years immediately preceding their assumption of public office, emulating similar residence requirements in all modern countries. Clearly, other views and better solutions could be found, but the issue is important enough to merit a national debate.