Well before the first bullet was fired, the stand-off between government forces and students of Islamabad’s Lal Masjid was a mediated matter. On June 29, a private cable channel reported that General Musharraf had said that the government would only take action if both the print and electronic media guaranteed that images of dead bodies from the encounter would not be published or broadcast. With this statement, the president declared the Pakistani media to be the third actor in a newsworthy event, a partner in an inappropriate mÃ©nage Ã  trois. Conditional, politicised and unconcerned with facts, General Musharraf’s statement made it clear that objective, fact-based reporting was not required from the media. Instead, he implied that the initiative would only occur if the media were complicit with the government’s agenda. From the beginning then, the local media was implicated in the Lal Masjid encounter in a way that an independent observer should never be, with objectivity falling as the first victim of the altercation.

Of course, journalism and objectivity have had a contentious relationship since February 27, 1968, when America’s most trusted news anchor, Walter Cronkite, concluded a news report with personal commentary, stating that in his “speculative” opinion, the Vietnam war was “unwinnable.” Indeed, objectivity — which is variously understood as the responsibility to be fair, factual, nonpartisan and truthful — increasingly seems like a vestige of journalistic practice from the last century. In a post-modern era, when interpretation informs all manner of inquiry, we have declared a single truth to be an impossibility. In the ever-shrinking global village, there is a desire to embrace as many diverse perspectives as possible and conclude that each story may have two or more sides.

Faced with this push towards pluralism, journalists have struggled to redefine objectivity over the past three decades. Today, there is broad consensus that journalists should aim to seek the truth, report the facts, and admit to subjectivity and bias when they sense it at work. Unfortunately, as media proliferates in new markets across the developing world, this basic premise of good journalism often comes under fire. That was literally the case as Pakistan’s electronic media covered the events unfolding at Lal Masjid.

Those quick to defend the electronic media’s coverage of Lal Masjid will point out that frontline reporters had limited access to the students barricaded within the mosque and were thus reliant upon government officials to provide up-to-the-minute — and necessarily one-sided — information. They will also point out that the media made every effort to articulate the viewpoints of both government officials and Lal Masjid leadership, with one cable channel even contacting Maulana Abdul Rashid Ghazi via mobile phone and allowing him to use the airwaves as a last-minute preaching platform. No doubt, journalistic practice was maintained in broad outline at the he-said, she-said level. 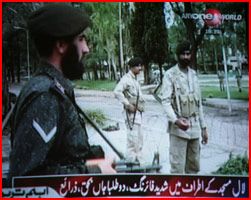 The fatalities and injuries sustained by frontline reporters and photojournalists prove that media representatives were well intentioned and determined to keep the public informed at any cost. And one cannot discount the effectiveness of the overall coverage of the Lal Masjid encounter as incessant live coverage, on-air banter and freewheeling speculations kept the nation riveted, riled-up and glued to their television screens for over a week.

But in the context of journalism, objectivity means far more than merely indicating that there are two sides to a story — it means presenting those contradictory narratives with as much detail and nuance as possible so that the public can reach their own conclusion about what is true. Adnan Rehmat, country director of Internews Pakistan, a non-profit organisation championing open media, argues that “if the government had stopped the media from getting information, that does not mean that the media gives up its right to that information.”

While acknowledging that journalists were put in a tough spot while covering the Lal Masjid face-off, Rehmat believes that they could have done more to present the public with a holistic picture. He points out that the media could have accessed hospital records, cross-checked government statistics by ascertaining how many students were registered with the mosque according to the Wafaqul Madaris, interviewed the family members of students remaining inside the mosque and profiled Maulana Ghazi after speaking with his fellow students from his days at Quaid-e-Azam University. “Once the media realised that Ghazi was media-friendly,” says Rehmat, “they counted on him to provide the other side of the story. But he was just one of the characters. Much more reporting on the mosque and its residents was required.”

Rehmat suggests that balanced investigative reporting is the key to objective reportage. But it takes more than fact-finding to render good journalism. Professionalism and a deep regard for the power of language can also help journalists and news anchors keep their personal biases and political leanings at bay. Relying on a tired clichÃ© may be the best way to illustrate how language and objectivity are intrinsically linked. If one man’s freedom fighter is another man’s terrorist, then word choice can reveal the mighty difference between ideologies and political standpoints. 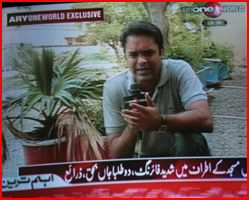 In a sensitive political situation such as Lal Masjid presented — one in which both parties to the conflict were claiming shahadat — the news directors of television channels would have done well to keep their reporters’ and anchors’ tongues in check. With each off-the-cuff joke, idiomatic expression and snide comment, Pakistan’s telejournalists presented their particular interpretation of events as they unfolded, rather than just the facts at hand. For example, an anchor on ARY Digital remarked that anyone who died in the mosque was a martyr while another anchor on Geo jokingly referred to Maulana Abdul Rashid Ghazi as the ‘commander-in-chief’ of the Red Mosque. After Maulana Abdul Aziz’s capture, reporters for several channels expressed their delight and announced that they had ‘good news.’ The fact that the cleric was burqa-clad at the time of his arrest led to much on-air mirth, with reporters offering descriptive, and thus subjective, accounts of Maulana Aziz’s ‘ashamed’ expression and respected news anchors speculating as to his thoughts and feelings at the time of capture.

More problematic than the often one-sided and tongue-in-cheek reportage was the media’s willingness to get involved in the action rather than maintain the journalistic position of an independent observer. Having garnered direct telephonic access to Maulana Ghazi, for example, a private television channel facilitated negotiations between the cleric and minister of state for information and broadcasting, Tariq Azeem. News anchors tried to broker an agreement between the two parties, clarify terms of surrender and deliver warnings at each end. Not surprisingly, when channels begin manufacturing the news instead of merely reporting it, there can be no hope of broadcasting anything more than a convenient truth, as the media’s vested interests have to be taken into account as well. Sadly, local media players transgressed the bounds of journalism by doing far more than acting as chief negotiator.

Before the government launched its final offensive on Lal Masjid, the fact that media representation of the crisis was a more entertaining spectacle than news coverage was exemplified by Pakistan Television’s re-enactment of Maulana Aziz’s capture. By having the cleric appear in a studio and lift the veil of the burqa he was still wearing, the government channel turned fact into farce and abandoned all pretensions at objectivity. The stunt was particularly humiliating for a man who had earlier declined to appear on television, citing religious convictions. Even without that added twist, though, PTV’s re-enactment blurred the line between fact and fiction in a manner that dealt a deathblow to journalism. Private television channels offered a similar, though less dire, blurring of opinion and fact when the interchange between newsroom anchors and on-location reporters was conducted in the manner of a talk show, rife with musings and melodrama.

Moreover, journalists and anchors belonging to one channel frequently failed to disguise their alignment and ideological biases, with one reporter declaring the mosque’s students to be martyrs while the next said the same for government forces. This flip-flopping further highlighted the low quality of reportage instead of addressing the fact that a balanced account was proving hard to acquire.

In the US, where the bastion of objectivity has been eroding since Cronkite spoke his mind, the media has seen an increased polarisation. Major newspapers, television channels and blogs are decidedly either left- or right-wing. With few centrist publications or broadcasts available, the average news consumer exists in an echo chamber, hearing only that which aligns with his or her personal views. This polarisation is apparent across American society as well as in the country’s political institutions and popular culture: Democrat or Republican, pro-choice or pro-life, Red state or Blue. A developing country such as Pakistan where democracy has yet to find its legs cannot, however, afford such a polarised socio-political landscape. Divides — digital, linguistic, sectarian, economic and political — are already the norm here and should not be exacerbated by isolationist, ideologically driven media outlets. Further polarisation, after all, can only lead to a severely ruptured society given that few platforms for communication exist in our political set-up as it currently stands.

Luckily, the learning curve of the Pakistani electronic media is steep and some good lessons may yet be learned from the Lal Masjid coverage. Indeed, even while the crisis was underway, private channels began debating the appropriateness of PTV’s re-enactment of Maulana Aziz’s capture. Speaking on Geo Television on July 5, Shahid Masood addressed the problem of a ‘media spectacle’ when he said that nothing had been gained from PTV’s antics and that the channel may as well have had the cleric dance or perform another kind of tamasha. Since the conflict has died down, such self-referential commentary has been delivered by a handful of prominent talk show hosts who have suggested that the media coverage of the Lal Masjid encounter was biased in favour of government accounts. Self-examination of this kind will undoubtedly help re-instill a regard for journalistic norms.

In addition to boosting the quality of their investigative reporting and instructing anchors to report in a language free of ideologically tainted phrases, channels can help the cause of objective journalism by training reporters on how to work in a conflict zone. The media seems to be under the impression that endless live coverage — the more close-ups, blood, gore and guns, the better — is the key to good reportage. Putting reporters at risk just so that they can keep the camera rolling will not make Pakistan’s public any more informed. Better planning, training and deployment of resources can ensure that those reporters who do sign in from the front lines are doing more than stating their opinions or generating a few basic facts to help bolster the preconceived notions of celebrity anchors. After all, only the truth, or a close approximation of it, is worth dying for.